Thomas Exell and his family 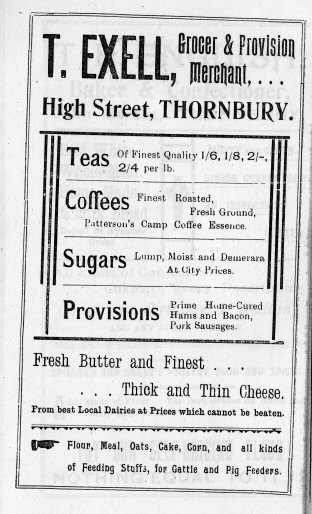 Thomas Exell was the son of George Henry Exell.  He was born in Thornbury on 14th April 1854 and was baptised two years later on 5th October 1856.  The 1861 Census shows that George and his family were sharing a household at the Baths in Thornbury.  Thomas’s father George was a shoemaker and Thomas aged 7 was the eldest of four children.  They were still living there in 1871 census.

Thomas’s obituary mentions that in his younger days he had worked on the indoor staff of Sir George B. Jenkinson at Eastwood Park.  By 1881 Thomas was working as a butler in Hastings in the household of Edward Harcourt and his lady (whose occupation was an “Earl’s daughter”).  The housemaid was Maria Vickerstaff.  We have learned from the Ancestry website that Thomas married Maria Vickerstaff on 6th June 1883 at Holy Trinity Church in Kensington Middlesex while he was a servant living at Lloyds Place and Maria was at Princes Gardens.  Maria was born in Stafford on 14th September 1850.  The marriage certificate shows that Maria’s father was John Vickerstaff a gardener.

By 1884 the couple had set up home in Thornbury.  Thomas and Maria had three children: Ernest George baptised in Thornbury on 18th June 1884, Lilian Mary baptised on 22nd July 1885 and Bertha Annie baptised on 14th December 1894.

Thomas appeared in the 1885 trade directory for Gloucestershire under the heading of corn and flour dealers.  The 1890 Rate Book shows Thomas had bought the property at 45 High Street and this became his home and business premises.  The 1891 census shows Thomas was a grocer aged 36 and he was living with his wife, Maria was also aged 36 born in Stafford and their children: Ernest G aged 6 and Lilian M aged 5.

By the 1901 census Thomas was a grocer and provision merchant still in the High Street in Thornbury.  He was aged 47 as was his wife, Maria.  They had three children; Ernest was 16, Lilian Mary was 15 and Bertha aged 6.  They had a domestic help called Susan Wilson.

Thomas acquired a number of other properties in the local area.  On 4th September 1900 he paid £96 for the two properties which later became known as 12 and 14 St Mary Street.  In 1903 he bought the properties that became Appledore and The Dingle in Gillingstool.  By 1905 Thomas had also become the owner of 32 High Street, 49 High Street and 16 Chapel Street according to the Rate Books.  Following the death of his father in 1908 he inherited his father’s home and the house adjoining (2 and 4 Horseshoe Lane).  On 2nd May 1916 for £125 Thomas bought 10 Upper Bath Road.  On 7th August 1916 Thomas paid £285 for the four properties, later known as 2 to 8 Upper Bath Road, which he bought for his daughter Bertha Annie Exell.  He also owned two properties in Gillingstool.

On 25th November 1915 Thomas’s son, Ernest George Exell, joined the army.  The record shows he served with the Cornwall RGA which we assume meant the Royal Garrison Artillery.  Ernest was 31 years and 6 months and 5ft 10 1/2.  He was discharged “no longer physically fit for service” on 14th February 1917.  He had blue eyes and brown hair.  We are a little confused by what happened to Ernest during this period as there is another set of documents showing that his father applied to have him exempted from military service on account of needing him in his business.  He appears to have been granted temporary exemption in July and September 1916.  Ernest’s sister, Lilian, served as ‘unqualified’ Nurse in the Voluntary Aid Detachment and spent some time in France (according to the 1915 Roll of Honour).

In 1916 on June 3rd the Bristol Mercury had a report about a breach of the the Defence of the Realm Act concerning Thomas Exell and his son Ernest.  Neither of these two were spies!  Ernest had been spotted driving without front and rear lights on his horse and trap by a local Special Police Officer.  Special PC Brown said he approached Ernest and warned him about the lights to which Ernest replied “the lights are alright.”  Ernest drove the trap into St Mary Street and into his yard where he shut the doors.  PC Brown asked him to open the doors but when Ernest ignored him he went to the front door of the house and fetched Ernest ‘s father Thomas.  They met Ernest and the constable asked him his name and he said only ” Exell.”  Thomas gave the policeman his son’s full name.  In court it was Thomas who came forward and apologised for his son and said he had highly strung nerves and he had “had work to get him to attend Court at all.”  Ernest was fined ten shillings.

We know from Thomas’s obituary printed in the Gazette that he had been a Sunday School teacher at the Thornbury Parish Church and a member of the Church of England Men’s Society.

On 6th November 1923 Thomas’s wife, Maria, died aged 73.  Thomas Exell died aged 75 on 14th January 1930.  The Western Daily Press of January 15th 1930 reported on the funeral of Thomas Exell and said that he had filled many posts in the town including mace bearer to the mayor, until that post became defunct.

His will appointed Lawrence Thurston Thurston, William James Shepherd and Lilian Mary Edwards formerly Exell his trustees.  He gave his trustees £40 each for their trouble.  He gave Bertha Annie Exell his daughter £500.  He gave his brother Henry Exell of Crossways £100.  Henry’s address was Woodbine Cottage Crossways.  Henry Exell died before his brother Thomas and so Thomas added a codicil to his will leaving £100 to Henry’s widow, Evelina.  He gave his other brother Frederick Exell of Reddings in Cheltenham £100.  His sister Mary Ann the wife of Charles Strong received £150.  His daughter, Lilian Mary Exell, inherited the house and shop at 45 High Street in which Thomas lived and its contents.  Thomas’s other daughter, Bertha Annie Winter the wife of Wilfred Percy Winter, inherited two cottages and an orchard on Alveston Hill.  Bertha and Wilfred had married on 26th December 1927.  Wilfred was the second son of Mr & Mrs Winter of Bath.

Thomas asked that his remaining real and personal estate should be converted into cash.  Two thousand pounds was to be invested within a trust to provide an income for his son, Ernest George Exell who was at that time in the County Mental Hospital in Gloucester.  After Ernest’s death the money was to be divided between his two daughters Lilian Mary Exell and Bertha Annie Exell.  Ernest George Exell appears to have remained in Gloucester until he died there on 23rd March 1958.