of the National School in Thornbury 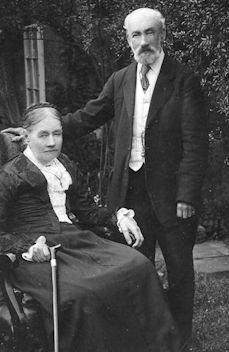 We are very grateful to Karen Fill who provided most of the photographs shown here and a great deal of the information we have about her husband’s family, especially about the children of the Fill family.

Thomas Fill was born in Great Yarmouth in Norfolk on 1st April 1840.  The 1841 and 1851 Censuses show that he was the son of a warehouseman (and later a ships’ chandler), James Fill and his wife Mary Eleanor, and that they lived in Great Yarmouth.   The 1861 Census shows that Thomas had become a National School master and that he was lodging in Herne.

He married Fanny Yoell in St Leonard’s Church, Streatham on August 7th 1865.  Fanny had been baptised at this church in Streatham on 24th June 1846.  She was the daughter of George Yoell and his wife and Ann (nee Fletcher).  The 1851 census shows George was a painter’s labourer and the family had been living at Leigham Lane, Streatham.  The 1861 census shows George was a plumber’s labourer living at 2 Smith’s Cottages, Leigham Lane and that Annie was working as a laundress.  In that census Fanny was away from home.  She was listed as a pupil in Herne.  She was boarding there with her elder sister, Charlotte, who was a teacher.  It has been suggested to us by a descendant of the family that Fanny may have been a pupil teacher rather than a pupil but we have no further information on this point.

The newsletter of the Society of Thornbury Folk tells us that the mangers of the school agreed to pay him £35 a year plus extra money in government grants based on performance and scholars’ fees.  The children each paid 2d per week but of course the expenses of fuel, supplies and the payment of monitors had to be met.  The newsletter tells us that Mr Fill was to “teach the usual subjects of elementary education for not more than twenty-five hours per week.”  He was also to ensure that his wife taught the girls needlework and assisted him in the general management of the school, although we understand that she was paid separately.

We believe that they came to live in the School House in Thornbury in July 1866.  This appears to be supported by the evidence of the 1867 Rate Book and the fact that their first child Lilian Fanny Fill was baptised in Thornbury on 8th August 1866.   The book “150 years of St Mary’s School” tells us that “Mr Thomas J G Fill was to be paid £35.00 a year, also – to receive the weekly ‘pence’ money.  School was not free.  At that time it cost 2d (less than 1p) for the first child.”

Nine more children followed at regular intervals and they were all baptised in Thornbury.  The 1871 Census shows Thomas John Golding Fill aged 31 from Norfolk and his wife Fanny from Surrey aged 24 lived in School House.  Fanny was described in the Census as a school mistress, despite having three young children: Lilian aged four, Eleanor aged three and Mabel Charlotte aged seven months.  By 1881  Thomas and Fanny had additional help in the school as Lilian then aged only 14 was a pupil teacher.  The family had grown to include Jessie (aged seven), Elsie (aged four),  Fanny (aged two) and Amy (aged nine months).  The family had a servant Annie Allen aged 14 to help cope with all these children.

We understand from “150 Years of St Mary’s School ” that “Mr and Mrs FILL and the Managers started ‘Penny Dinners’ for the children during the winter months, to provide them with a substantial hot dinner.  The Managers provided the plates, basins and spoons, and Mr HOWARD provided the kitchen and boiler (he owned the house next to the School House).  The sort of fare they received depended on what could be bought according to weather.  They had Irish Stew, Pea soup with bread, and puddings of raisin pudding and rice pudding.  If part of the dinner was left and could not be sold to local families, it was given to the poor.”

The 1891 Census shows that the family no longer had a servant living in the house but had two more children, sons Walter and Archibald.

During his time at the school Mr Fill started a Drum and Fife Band.  This band was very popular, and even played on annual choir outings to Weston-Super-Mare.

The school Log Book makes it clear that Mr Fill was teaching his Pupil Teachers at 7 o’clock in the morning before School during the summer, and at 4.30 after School during the winter months.  In 1897 on the 22nd January, the Vicar, in the name of the clergy and Sunday School Teachers, presented Thomas Fill with a very handsome silver tea service, “as a token of the good and kindly feeling towards him for the voluntary work as teacher and superintendent which he had carried on for over thirty years in the Parish Church Sunday School.”

Some of the Inspectors’ reports are very outspoken to say the least.  In 1899 the summary of the report said “Mixed School.  The condition of this school is in many respects inferior to that of other schools with which it may be fairly compared.  The order is weak, there being a want of smartness and attention among the scholars and at times an inclination to copy, which must seriously retard satisfactory progress.  Very little has been attempted in the way of physical exercises, the teaching especially that of arithmetic is too individual; the exercise books are not well corrected and the record books are most unsatisfactory.  The reading of the upper standards is indistinct and but fairly intelligent, the written work generally is poor in style and the quality of the class work is uneven the higher grant for geography being recommended with much hesitation.  Much improvement will be looked for if this recommendation is to be continued.  The needlework is fairly good. Many of the children are old for their respective standards.  Infants’ Class: the infants behave well and are making fair progress.  Some better desks should be provided without delay and the utensils for cleaning the premises should not be stored in this room.”

The school was also inspected on behalf of the Gloucester diocese, mainly to ensure that the children were receiving a good Christian education.  We have copies of some of these reports and they tended to be much more favourable.

The 1918 Electoral Register shows that the Fills continued living at the School House long after they had retired.  They do not appear in the 1921 electoral register.  This might be explained by the fact that when Fanny Fill died on 20th January 1922 aged 75 the burial register for Thornbury Cemetery shows that she was living at Ashley Grange, Bristol at the time of her death.  Ashley Grange appears to have been a nursing home.

The report of her funeral appeared in a local newspaper on 25th January said that “the funeral of Mrs Fill (75) who passed away on the 20th Inst. took place on Tuesday at Thornbury.  For many years the deceased lady occupied the post of head-mistress of Thornbury National School, of which her husband Mr T. G. Fill was headmaster.  The first portion of the service was conducted at Thornbury Church, whither the coffin was conveyed from Bristol, the officiating minister being the Rev. Reece.”

Thomas Fill then went to live with his married daughter Eleanor and her husband Frank Adams at the White Hart Inn in Chipstead.  Thomas Fill died there aged 83 on 4th April 1923.  He was buried in Thornbury Cemetery on 9th April 1923 and the burial register confirms that he died at Chipstead. Thomas and Fanny Fill with family

The children of Thomas and Fanny Fill

The photograph above shows Fanny and Thomas Fill in the front row.  They are surrounded by their nine surviving children; the two boys, Walter and Archie and their seven sisters. of the parchment “Walter Y. Fill has served me faithfully during his apprenticeship.”  By the Census of 1911 he was a grocer’s shop assistant boarding at 38 Lichfield Grove, Finchley, London and he later went on to have his own grocer’s shop in Finchley.  On 30th March 1913 he married Evelyn Adams at St Margaret’s Church in Chipstead.  She was the daughter of William Daniel Adams a retired inn keeper of the White Hart Inn in Chipstead.  After their marriage they lived at 10 Victoria Parade in Finchley.  Walter enlisted in the Army Service Corps on 9th December 1915.  He served in France April 1917 to June 1918.  He was demobilised in July 1919.  In 1945 when his sister Lilian Fanny died Walter was named as executor and his occupation was a stationer.  Evelyn died in 1934 and Walter re-married, this time to Margaret Atkins in 1935.  Walter died at the Memorial Hospital, Finchley on 7th May 1952 and his death was registered in Hendon.  His second wife Margaret died in Clacton in 1998.  Walter and Evelyn had two children, Walter John born in 1914 and Evelyn Eleanor, in 1915.  John as he was always known eventually also lived in Thornbury where he taught at the Castle School, becoming Head of Maths. He died on 13th February 2000 and is buried in Thornbury Cemetery in the same grave as his grandparents Thomas John Golding and Fanny Fill and their daughter Elsie Fill.  It is interesting to note that John Fill not only continued the family’s association with Thornbury but he left a lasting reminder of the Fill’s interest in the town.  In 1964 he presented the school with the name plate of a Castle Class steam engine “Thornbury Castle”.  The price paid at that time will surprise today’s locomotive memorabilia collectors as the name plate at that time cost only £15.  On the right we have a thumbnail image of Walter and Archibald as children.  Please click on it to see a slightly larger image.