The house now called 4 Castle Street in Thornbury was long associated with Hubert (Bert) Fudge and his wife Edna and then owned by their daughters.

We have a collection of photographs of the Fudge family.  Click here to see them

At first the house was owned by his father, Samuel Fudge, who was also an architect and surveyor, amongst his many other jobs.

Hubert Harry Fudge was born on 30th November 1898, although his birth was not registered in Thornbury until the May quarter of 1899.  He grew up at 4 Castle Street.

The 1901 census shows Bert (as he was generally known) with his family at their family home.  His father Samuel Fudge aged 39 was described as an architect working on own account and he was born in Gloucestershire.  Eliza his wife was aged 30 and from Somerset. Bert was then aged two and was said to have been born in Thornbury like his brother Gerald, then aged seven.

The 1911 census shows Bert’s father, Samuel Fudge was then aged 48.  Samuel was an architect who had been married to his wife Eliza for 18 years.   They had three children and the Census shows that a fourth child had died.  Bert was then aged 12 and like his sister Kathleen aged seven he was still at school.

Hubert was educated at Thornbury Grammar School and served his apprenticeship as a toolmaker with Straker Squire (also known as Straker Brazil) of Fishponds Bristol who used to make cars.

In Christmas 1917 Bert was, like many men, serving in the forces, sent a Christmas gift from the people of Thornbury.  Each parcel contained a Christmas card, one tin of gingerbread biscuits 50 cigarettes, one khaki handkerchief, and one tablet of soap provided out of the money subscribed and in addition one pair of socks made and given by the ladies knitting party who were part of the Thornbury Working Party.  From the newspaper report of this gift we know that at that time Hubert was stationed at “Killingholme” with the Royal Naval Air Service.  Killingholme was the site of an airfield and a sea plane base.

He then served at Ashton under Lyme before he went over to America as a tool maker for Ford’s on 7th August 1923.  Bert worked in Detroit and his photograph album shows his excitement at this bustling modern city which must have been so different from Thornbury and even Bristol so soon after the First World War.  The  photograph above shows the Ford Factory in Detroit and the showrooms of Ford and Lincoln cars with a line of Ford cars.

Bert’s father Samuel died in 1924 on June 21st.  A later newspaper article said that when Samuel died Bert was working in America.  Apparently he received a telegram from the Inland Revenue asking him to come home.  Bert sailed home via Montreal on the SS Montcalm July 4th 1924.  On his return to England he learned that his father was dead.

Bert was appointed Collector of Taxes in his father’s place.  He also became manager of the employment office on April 4th 1928.  The photograph above shows 4 Castle Street during its time as the Employment Office and on the original photograph it is possible to read the sign in the window which declares its official status.

On 4th July 1929 Eliza Fudge conveyed the house to her son, Hubert Harry Fudge, a collector of taxes.  Eliza moved across the road to number 5 Castle Street.  This move may have been triggered by the fact that Bert was intending to marry.  Bert married Edna Dorothy Colman on the 30th August 1930 at St Michael’s Church on Two Mile Hill near Bristol.  Edna was the fourth daughter of a dairyman, Edward Colman and his wife Elizabeth.  She was born 20th January 1902.

The electoral registers showed that they continued to live at number 4.  It is likely that Bert’s sister Marjorie Fudge moved with her mother at this time.

Bert and Edna worked together.  A newspaper report about about the couple says that she once helped him to register nearly 2000 National Servicemen.  We believe that this was as a result of the National Service (Armed Forces Act) of 1939 which reintroduced National Service and must have created a great deal of paper work for civil servants as the country prepared for war.  During the Second World War they also issued the food, clothing and other coupons. 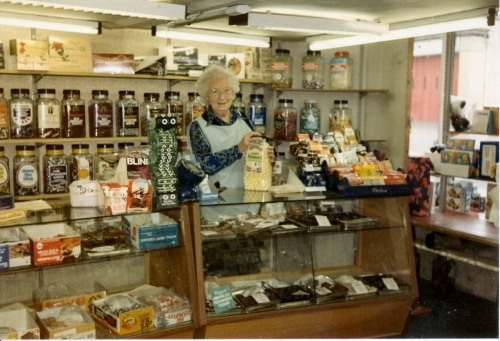 Edna Fudge at work in the sweet shop

Bert had many other jobs and interests.  He was Clerk of the Thornbury Town Trust for 35 years.  He was also a freemason.  Edna Fudge also seems to have been a very busy person as she later ran the Candy Store at 3 High Street in Thornbury.  We have been told by a member of the family that Edna began by helping Annie Pitcher in the shop but that she bought the business on 29th September 1965.  By this time Annie Pitcher must have been almost 90 years old so it comes as no surprise to hear that the shop became too much for her.

Eliza and Hubert had two daughters, Angela and Judy, both of whom were educated at Thornbury Grammar School.

The deeds held by the present owners of 4 Castle Street show that Sidney Dearing had moved here from his larger premises at 14 The Plain.  He signed a lease in 1963 to use the one room now divided into two rooms downstairs “until recently occupied by the ministry of labour as offices” as a chiropodist.  This does not imply that the Ministry of Labour no longer held offices as there are also documents which relate to the two rooms and a pantry (with use of the WC) that the Ministry of Labour and then the Department of the Environment rented from Hubert Fudge. 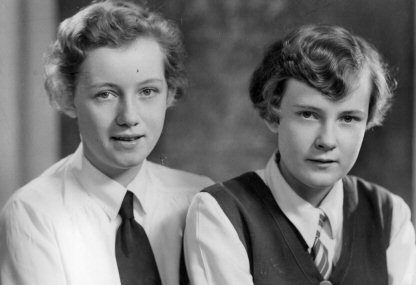 In 1972 documents show that Edna continued to rent out the ground floor of the property even after her husband’s death.  Sidney Dearing surrendered his lease of the rooms on the ground floor in July 1982.  Hubert Harry Fudge died in June 1974 aged 75.

On the 7th February 1986 Edna Fudge conveyed number 4 Castle Street in trust to her two daughters Angela and Judy, who by this time were both married and living away from Thornbury.

On Dec 10th 1987 Edna Fudge and her trustees leased the greater part of the ground floor to Mr John C Bryant, a licensed conveyancer (This is apparently a specialist property lawyer, someone who is trained and qualified in all aspects of the law dealing with property) who in 1995 demised the lease to a local solicitor, Mr Alan Hodge who currently practises from that address.  Edna died on November 30th 1996 aged 94.  After their mother’s death, Angela Talintyre and Judy Joyce continued to own the house.

go to the history of the house