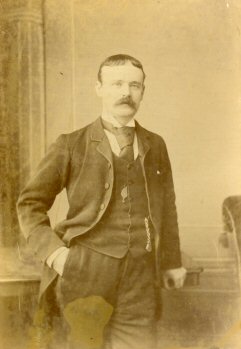 Samuel Fudge and his wife Eliza lived at 4 Castle Street in Thornbury for many years.

Samuel was born in Gloucestershire on 13th October 1863.  He was baptised in Bristol on 1st November 1863.  The record says that his parents were Samuel and “Eliza”.

In the 1871 Census the eight year old Samuel was living in Richmond Terrace in St Philips in Bristol with his parents, Samuel and Elizabeth Fudge.  Elizabeth was presumably also known as “Eliza.”  Samuel the elder was a 47 year old boiler maker born in Kingswood near Bristol.  Elizabeth and Samuel had two other sons (Thomas aged 20 and James 18) and five daughters (Mary 16, Caroline 18, Sarah 12, Fanny 6 and Lilly 3).  In 1876 Samuel’s father died aged 52 and his death was registered in Bedminster.

On 21st April 1877 Samuel, who was said to be living at 7 Richmond Terrace Barton Hill in Bristol, was apprenticed to an architect called Alfred Harford of 30 Broad Street in the St John District of Bristol.  The indenture showed that Samuel’s brother, Thomas Fudge had to pay £30 for the five year apprenticeship, during which time he also agreed to provide clothes, food and lodgings for Samuel.

In the 1881 Census Samuel was living with his widowed mother and his two younger sisters Fanny and Lilly.  Samuel was aged 18 and a student architect and surveyor.  They were living in Barrow Lane East in St Phillips.

At the end of his five year 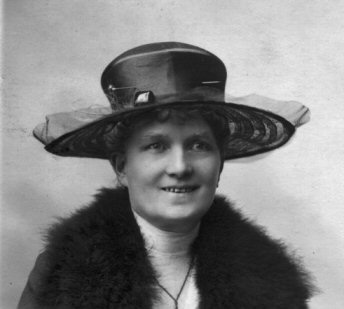 apprenticeship as a surveyor and architect, Samuel received an excellent reference from his employer –

” I have great pleasure in stating that during the whole time Samuel Fudge was with me as a pupil I found him most obedient, punctual and thoroughly reliable. In his work he was neat and exact and I could with great confidence recommend him to a situation as an assistant.”

It is possible that Samuel’s first job in 1881 was with Joseph Young Sturge in Thornbury.  We have found an article in The Bristol Mercury and Daily Post of October 22nd 1892 in which Samuel gave evidence in a court case.  As part of his evidence Samuel “architect and land surveyor, said in 1881 he was in the employ of Mr J.Y. Sturge at Thornbury.”

A Bristol newspaper of 7th December 1881 carried a report of an address that Samuel Fudge (described in the article as “of Thornbury”) gave to the Junior Architects’ Society at the Fine Arts Academy about the usefulness of apprenticeships, providing that the master was a good teacher and the apprentice diligent and attentive.  He also said how desirable it was that the young apprentice desired to follow the trade he was apprenticed to.  It seems that Samuel was very much drawing on his own experience of a job he enjoyed with a good teacher.

In the 1891 Census Samuel and his mother, Elizabeth, were lodging in Barrow Lane East and Samuel was indeed working as a surveyor’s assistant.

The photograph shown above on the left is of Samuel Fudge and it was taken in 1890.

We believe that the lady in the photograph on the right was Samuel’s wife Eliza nee Dinham.  Eliza Dinham was born in North Curry in Somerset on November 9th 1869.  The Census of 1871 shows that Eliza was the daughter of James Dinham a carpenter and his wife, Ann.  The 1881 Census shows them still living in North Curry.  By this time Eliza had three sisters (Edith, Alice and Matilda) and one brother (William).

We have been told that Samuel and Eliza met while singing in the choir of Bristol Cathedral.

Their wedding in 1892 was reported in the “Family Friend”; “St. Mary’s Church, Tyndall’s Park, Clifton, Bristol, was the scene of a very pretty wedding, on Saturday morning, September 17th, the contracting parties being MR. SAMUEL FUDGE, Thornbury, successor to the late Mr. J. Y. Sturge as Secretary to the Thornbury Gaslight and Coke Company, Limited, and MISS ELIZA DINHAM, second daughter of Mr. James Dinham, of North Curry, near Taunton, Somerset.  The bride, who was very prettily attired, was accompanied by one bridesmaid, her sister, Miss Lizzie Dinham, and was given away by her uncle, Mr. Edward W. W. C. Denby, of 7, West Park, Clifton, Bristol.  The ceremony, which took place at eleven o’clock, was performed by the Rev. E. Beresford Cook.  In the afternoon the happy couple left Clifton for London, where they spent their honeymoon.  The bride and bridegroom were the happy recipients of numerous presents, presented to them by their many well wishers.”

It seems that Samuel and Eliza Fudge set up home in Thornbury immediately after their marriage in 1892.  Certainly we know that their son Gerald was baptized in Thornbury in 1894.

The Rate Book of 1894 shows that Samuel Fudge was renting a house on The Plain from Francis Gayner.  This house later became known as 15 The Plain. 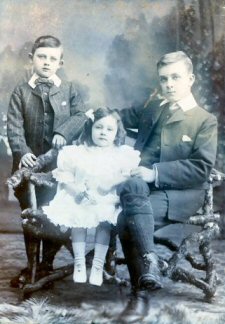 from left to right Bert, Kathleen & Gerald Fudge circa 1907

We have some indications of the projects undertaken by Samuel in his capacity as architect in Thornbury.  For example, David Verey and Alan Brooks in “Gloucestershire the Vale and Forest of Dean” say that Samuel designed Thornbury Cemetery Chapel in 1897.  Furthermore, Gloucestershire Archives office has plans relating to his work on what was then the Council School in 1898.  The plans are said to be “New board school and additions to existing school, owned by Thornbury School Board, designed by Samuel Fudge.”  In 1906 he is also credited for “Alterations and rebuilding work at dwelling houses and shops, High Street, for Thomas Exell”.  In 1907 he designed a new house at the Gasworks for Thornbury Gaslight & Coke Company.

The Trade Directories show that Samuel also worked as an architect, a land surveyor, steward to Thornbury Castle, Secretary to the Gas Company (click here to read more about Thornbury’s Gas Company) and Collector of Taxes.

In 1905 and 1910 the Rate Books show that Samuel Fudge was now renting his house from the trustees of the late Richard Scarlett which means that he was living at 4 Castle Street.

Samuel and Eliza Fudge had been living in the house for some time as tenants.  They were given the chance to buy the house in 1919 when on 15th April the property was auctioned.

Their home in Castle Street was described in the sale as lot 5, “A Very Desirable Modern Dwelling-House situate at Castle Street.  Numbered 265 on the Thornbury Tithe Award.  In the occupation of Mr S Fudge under lease expiring at Lady Day 1922.  The House contains on Ground Floor – Three Rooms with Kitchen and Boiler House.  There are also Three Principal Bedrooms, Attic and Underground Cellar with Garden at the rear”.

On 4th July 1929 Eliza Fudge conveyed the house to her son, Hubert Harry Fudge, a collector of taxes.  Eliza moved across the road to number 5 Castle Street.  This move may have been triggered by the fact that Bert was intending to marry Edna.  The register compiled in 1938 in preparation for the outbreak of World War II confirms that Eliza had moved to 5 Castle Street where she was living with her daughter Marjorie.

Eliza was buried in Thornbury on 30th March 1942.  Eliza was always known in her family as Judy and it is interesting to note that the record of her burial initially said “Judy Elizabeth” but this was crossed out with the phrase “Eliza as per death certificate” inserted.

See also the photograph album for the Fudge

Gerald Edward Samuel Fudge was baptised on 6th April 1894 in St Mary’s Church in Thornbury.  He attended Thornbury Grammar School until 1911 and then worked in a bank.  The 1911 Census shows him at the home of his aunt Miss Dinham in North Curry in Somerset and confirms that he was a bank clerk.  He emigrated to Canada in 1913 where he worked on a fruit farm.  During the First World War he served in the Canadian Royal Flying Corps.  During the depression in the 1920s he went to the USA and worked in Washington, Oregon and California.  When the USA came into the World War II he joined the United States Corps of Army Engineers and worked on camouflage.  He toured the greater part of Alaska camouflaging air-bases.  In 1955 The Gazette reported that he was still working in Alaska on an airfield called Kechikan in Southern Alaska.

Hubert Harry Fudge’s birth was registered in the May quarter of 1899.   He grew up at 4 Castle Street.  Read more about Hubert Fudge

Marjorie Fudge was born on 5th November 1903.  She attended a private school and then Thornbury Grammar School which she left in July 1921 to commence a career in teaching.  Marjorie later lived at 5 Castle Street

Go to the History of this house