and her son Douglas Garn 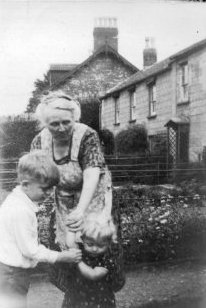 According to the Electoral Registers, between 1939 and 1960, 14 Gloucester Road was occupied by a widow, Ethel Garn.  She is shown in the photo on the left with Henry Smith and his brother.

We know from the Special Register compiled in 1939 in the advent of war that Ethel was born in Cardiff in Glamorgan on 21st March 1880.   In the 1881 Census Ethel was living at St Lythans with her grandparents, Morgan Grant and his wife, Gwenillian.  Morgan was said to be an agricultural labourer with 9 acres in this census but later records call him a farmer.

Ethel is shown as being their grand-daughter although in the 1891 Census she is shown as their niece.  She continued to live with them according to the 1891 and 1901 Censuses.  We  have been contacted by members of Ethel’s family who have provided an explanation for this anomaly.  It seems that  her parents were actually Gwen Grant  and Gwen’s first cousin Evan LLewellyn, a council rates collector.  This sad story was published in June 1880 in a newspaper account of the court case in which Gwen claimed maintenance for the child from Evan who denied being the father.  The maintenance order was granted.

The 1901 Census shows that Ethel was able to speak in Welsh and English.  The 1911 Census shows  Ethel still living with her widowed grandmother on their farm at Duffryn Mill, St Nicholas near Cardiff.  Ethel was helping with the dairy work.

In April 1918 Ethel married  Albert Jesse Garn in St Dyfrig’s Church, Cardiff.  Albert was born in Cheltenham in the September quarter of 1882, the son of Joseph Thomas Garn, a grocer’s porter and his wife, Louisa.  By 1901 Albert had left home to live in Ystradyfodwg near Rhondda were he was working as an assistant to a coal hewer.  Albert was boarding with Ethel and her grandmother at the time of the 1911 census.  He was employed as a gardener.

We don’t know much about Albert during the War.  His pension record shows he was discharged from the ‘Lincolns’ on 13th April 1917.  He had been serving as a Corporal and was awarded a disability pension.  The address shown on the record is ‘Mumbys Hill, Thornbury’, but we don’t know whether was his address when discharged or later when receiving his pension.  After the War he was one of the first members to join the Thornbury Branch of the British Legion and he served on the committee.

Albert was already living in the Thornbury area when the banns were read for his marriage to Ethel and they had settled in Thornbury by 1919, when their son, Douglas Grant Garn was born on 19th February.  He was baptised at St Mary’s Church on 6th April 1919.  The family lived at Mumbleys at that time and Albert was working as head gardener for Mrs Masters at nearby Kyneton House.  Albert also acted as judge at horticultural shows.  They continued living at Mumbleys until Albert died there on 26th January 1935.  He was aged 52 years.  In 1938 Ethel was shown in the deeds as being the tenant of 73 High Street.  She was also shown as being the occupant there when the house was being put up for sale in September 1938.  Following this sale, Ethel and Douglas must have moved to 14 Gloucester Road.

Douglas started at the National School (now called St Mary’s School) in April 1925.  In 1929 he gained a place at the Grammar School.  We also know that Douglas was keen on drama and he appeared as ‘Giant Gorribuster’ in the production of Jack and the Beanstalk that was performed in Thornbury in February 1938.  The Gazette newspaper made reference to Douglas’s contribution in its review of the pantomime:  ‘A masterpiece of make-up was that of Giant Gorribuster played by Douglas Garn.  A lumbering, fearsome-looking monster, towering over the others, yet afraid of his managing wife.  The voice was not always in keeping with the character, although it was sometimes very good’.

In 1940, the Gazette reports that Douglas had joined the Thornbury Cricket Club and was considered a very promising wicket-keeper and was also proving himself useful as assistant secretary.  The annual report refers to the club’s loss when in that year (1940) Douglas joined the RAF Volunteer Reserve and became a sergeant bomber pilot in the 77th Squadron.

Henry Smith remembers the excitement caused when Ethel heard that Douglas would be flying over the house one day and all the neighbours were out in their gardens to watch a plane fly over and ‘dip its wings’.  Tragically Ethel received a telegram a week later to tell her that Douglas was missing.  He had taken off from Squadron base at Topcliffe, North Yorkshire on a raid over Hamburg on 2nd May 1941.  His Whitley Bomber (Z 6461) ditched into the North Sea, either en route to Hamburg, or on its return.  There were no survivors.  The body of the radio operator/air gunner Cyril Hutchinson was recovered from the North Sea by Kriegsmarine Patrol boat 1207 on 7th August 1941 and it is thought possible that Douglas’s body was also recovered at the same time or that his body was washed ashore.  He is commemorated in Kiel War Cemetery alongside Cyril Hutchinson.  The bodies of the other three crew members were never recovered.   Douglas was aged only 22. 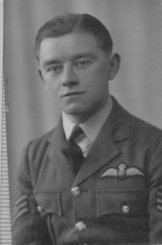 The following obituary appeared in the Gazette on 4th October 1941:

“On gaining his wings he joined the Bomber Command as second pilot in a Whitley bomber, and died in the service of his country, apparently on a raid over Hamburg, as it is near that town that he is believed to be buried.

Sergt Garn was at Thornbury Grammar School until July 1935 when he gained his first school certificate and cricket colours.  On leaving school he joined the firm of Messrs Moses Smith and Luce and when called up he was on the clerical staff of the Civilian Anti-Gas School.  He was a promising member of the Thornbury Cricket Club and secretary of the Old Thornburian Society.  In the latter capacity he did invaluable work for the Society’s activities.  When on leave he invariably called at the school and gave descriptions of his training experiences to the older boys – descriptions which were absorbingly interesting and delivered in the modest manner which was one of his characteristics.  The school has lost one of its soundest pupils it ever had and the town a promising young citizen.  The deepest sympathy is felt for his mother, Mrs Garn, in the loss of her only son

Airman, rest thy warfare o’er,
Sleep the sleep that knows not breaking;
Dream of battled fields no more,
Days of danger nights of waking.”

Ethel continued to live in Gloucester Road, taking in the occasional lodger from time to time.  The 1939 register compiled in preparation for the War lists two lodgers, Arthur W. Angell, an unmarried  ‘under-manager (grocery)’ born on 2nd April 1910 and Vivian H. Chapple, an unmarried bank clerk born on 17th February 1920.

Two other lodgers are remembered as being Miss Gale and Miss Jones, both teachers at the Grammar School.  We know that Miss Margaret Elizabeth Gale joined the staff as a French teacher in 1938.  She had qualified at Reading University with one year at Strasburg University.  She was known by the nickname of ‘Windy’ by her colleagues.  She left in 1950 to move to Teignmouth.  John Pridham recalled Miss Gale as ‘a good looking, well built lady, with a continental hair style, probably in her late thirties and on the whole rather a sweetie.  In some circles she may have been known as Elizabeth but not in the classrooms – where, as I remember, we (the boys that is!) rarely bothered to find out the names of the “Misses” and their married colleagues unless they were on our black lists.  Miss Gale was qualified in French and was a good teacher.  Miss Gale, gave us our first lesson.  Her sessions were always preceded by the following, never to be forgotten and at first, meaningless dialogue: “Bonjour mes enfants”; “Bonjour Mademoiselle”; “Asseyez-vous”; “Oui Mademoiselle”.’

We are not sure about Miss Jones but she could be Mair E. W. Jones, a music and P.E. teacher who joined the school in 1948 and left in 1950 to marry Johnnie Johnson .

Ethel died on 7th June 1961 aged 81 years.   We know that the house was then sold to Cyril Williams in March 1963.   As far as we know Cyril never lived in the house and continued to let it out to tenants.