Sidney Gayner and his family had a well known drapery business in Thornbury.

We are fortunate to have a copy of a newspaper cutting taken from the Evening Post in 1962.  A whole page is given to the story of Sydney Gayner and his family.  It refers to the fact that his family had been in business in Thornbury since the reign of the first Elizabeth – over 400 years ago.  Click on the thumbnail to see this article.  His forbears were weavers in the Town.  Old records show that a tithe was paid to the Lord of the Manor at Thornbury Castle by Mychel Gayner, a weaver in 1523.  The widow of Mychel made several property deals witnessed by the ‘Mayre of the Town’. 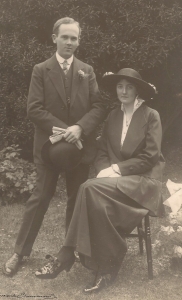 o much effort, we have been able to trace Sidney’s ancestors back over 200 years.  Click here to read about Sidney’s earlier ancestors

Sidney Harris Gaynor was the son of Francis Gayner, a saddler and linen draper and his second wife, Lucy (nee Harriss).  He was baptised on 27th March 1886.  He was brought up living in the flat above the shop at City House in the High Street.

Sidney attended Thornbury Grammar School when there were only 16 boys – just enough to raise a cricket team with umpire and scorers.  During the First World War he joined the Royal Flying Corps.  He was serving in Egypt in 1917 when the townsfolk of Thornbury sent him a Christmas parcel, as well as to all the other local boys serving in the Forces.  We understand that throughout his life he suffered from the effects of malaria caught whilst serving with the forces overseas.

Sidney married Dorothy Kathleen Symes in the Christchurch area of Hampshire in December 1915.  Dorothy was born on 1st November 1891, the daughter of Charles Symes and his wife, Jane (nee Maishment).  The photo on the left shows the two of them at the wedding.  In 1919 Sidney was a tenant living at 50 High Street.  They had two daughters, Pamela Mary born in Thornbury in September quarter 1916 and Jean Frances born in June quarter 1924.

Sidney was very successful in business.  He carried on the draper’s shop at City House in the High Street.  His shop had a reputation for personal service and for providing the ladies of the Town with ‘haute couture’.  He knew just what his customers wanted.  He told the Evening Post reporter that ‘once a week he went into Bristol to a wholesalers with a book of orders – the requirements of farmer’s wives and country folk’.  During the Second World War he was well placed to profit from the heavy demand for blackout material needed by every household in the area.

Sidney was also heavily involved in other aspects of the Town.  As early as the age of 16 he was appointed to the role of ale taster.  He recalled in his Evening Post interview ‘I was only a boy of about sixteen at the time’ he smiled.  ‘Which was rather strange as my office gave me the right to enter any Thornbury hotel and demand a pint of beer.  If it was not up to standard I could report them to the proper authorities.  I never exercised my rights for by that time the whole affair had become something of a farce’.  The reforms of the nineteenth century took away all authority but the ancient civic offices lingered on in Thornbury for some years.  Now they have vanished for good’.

Sidney enjoyed cricket, and in his early days played for the Thornbury Castle Team.  When this team was amalgamated with the Thornbury Cricket Club about 1919, Sidney played under the captaincy of Dr E. M Grace.  He later became Vice Chairman of the Cricket Club.  The following thumbnail sketch was written about Sidney by Edgar Mervyn Grace and we are grateful to Les Summerfield, the Cricket Club and Mike Grace for allowing us to use these notes:

S. H. Gayner – son of one of the first members of Thornbury C. C., Sidney was a useful cricketer, keeping wicket for the Castle Club and from 1919 a very enthusiastic member of the Committee.  Vice-captain from 1919 to 1921 and Vice Chairman from 1948 – 1965.  After ceasing to play he stood as umpire and enjoyed his cricket in this way, rendering great service to the Club until his death.  He succeeded his father in the Drapers shop in the High Street opposite the entrance to Park House, where E.M. Grace lived, but on retiring he went to live in an old house on the Plain.  During World War I he served in the Royal Flying Corps and later became Vice-Chairman of the Thornbury British Legion. 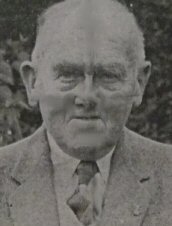 also wrote about his uncle, Sid, referring to ‘quiet and rather timid voice of her pleasant husband, Sidney Harriss Gayner, the milliner/draper in the High Street.  Sid Gayner always found moments to chat with me.  At one time I could boast that my Uncle Sid was the Chairmen of Governors at my second school, Thornbury Grammar, not that this relationship gave me any obvious advantages neither did his membership of the Parish Council, to which Uncle Charlie Pitcher also belonged’.

When Sidney came to retire he moved into the family home at 10 The Plain.  He had no son to continue the long line of succession and the business was sold.

Of Sidney’s daughters, we understand both of them went to school in Bristol, served in the Royal Navy in the Second World War.  They both married bank managers.  Pamela married Ernest Arthur Davies in Thornbury in 1938.  Jean married Peter Bach in Thornbury in October 1944.  She died in 1997 aged 72 and is buried with her husband in her parent’s grace in Thornbury Cemetery.