From the 1840s onwards, the Thornbury branch of the Gayner family became drapers and they continued trading in the town for over 100 years.

Henry Penduck Gayner – Henry was baptised in Thornbury on 25th February 1821.  He was the son of Charles Gayner and Ann (nee Penduck.  We believe Henry married in the Bristol area in March quarter 1842 and that his wife may have been Sarah Smith, the daughter of Thomas Smith, a tailor, and his wife, Sarah.  They had three children: Charles baptised on 27th April 1845, Henry baptised on 9th January 1848 and Francis baptised on 16th March 1851.

Henry and Sarah appear to have settled in the shop next door to the Swan which later became known as 19 High Street.  Henry started off being a saddler and harness maker in the shop whilst Sarah traded as a staymaker.  The 1851 census shows them there with their three sons and a house servant, Ann Stagg, aged 14.  By the 1856 trade directory Henry had become a linen draper.

The 1861 census just describes Henry as a shopkeeper, but the 1871 census shows Henry, Sarah and their son, Charles all working as ‘Draper’.  We found the following article in the Bristol journal in 1869.  ‘Fire – on Sunday morning, the 20th ultimo, a beam took fire in a bedroom of Mr. Henry Gayner’s.  A new register grate had been placed in the room, and as the heat from it was much more intense than given out by the old grate, it was thought this was the cause of the fire.  Mr Gayner’s son was in bed at the time, and observing smoke issuing through the paper over the fireplace, he got out of bed and tore it off.  Assistance was called, and the fire soon extinguished, and the beam taken out of the wall, before much damage was done.  Had the fire not been fortunately discovered a large amount property would probably have been destroyed.  It is a common saying in Thornbury, that if one house took fire on that side of the street, nothing could save the whole of the houses being destroyed.  The buildings are all old, most of them having a large quantity of wood employed in their construction; and if a fire did take place, we have neither water nor the engine to extinguish it’. The above photograph was sent to us by a descendent of the Gayner family and it is thought to be a photograph of Henry.  On 14th March 1869 Henry and Sarah lost their son, Henry aged 21.  In March quarter 1872, another of their sons, Charles, married Ellen Ann Spencer in the Bristol area.  Charles and Ellen had four children: Frances Sarah baptised on 15th December 1872, Leah Ellen baptised on 15th March 1874, Henry Charles baptised on 14th November 1875 who died aged eight months and was buried on 29th June 1876 and Charles baptised on 24th February 1877, just a couple of months after his father’s death.  Charles (Senior) died on 28th December 1876 aged 31.

The family appear in the 1877 trade directory as ‘Gayner and Sons’ described as ‘Family Drapers, Hosiers, Boot and Shoe Dealers and Agents for Singer Sewing Machines.  This small shop and the one next door were owned by the Governors of Thornbury Grammar School.  They were put up for sale on 10th July 1880 for £700.  It was described as a messuage or tenement comprising a dwelling house and two shops situate in the High Street and now in the occupation of Henry Gayner at an annual rent of £17 per annum.  The property was bought by Henry Gayner in October 1880.  Henry now also rented two pieces of land from the Grammar School; one at Crossways and one on Alveston Hill.

Henry died on 26th August 1881 aged 60.  A report in the Bristol Mercury shows that Henry had driven to Patchway on Wednesday evening and on his return ‘was seized with paralysis.  He was conveyed to his residence where he died early on Thursday morning’.  Sarah died on 30th March 1885 aged 68.  It was left to their son, Francis to carry on the family business.

Francis Gayner – Francis was baptised on 16th March 1851.  He was the son of Henry Penduck Gaynor and his wife, Sarah (see above).  As a young man Francis played cricket for the Thornbury Cricket.  He is mentioned in a biography about Dr. Edward Mills Grace written by his son, Dr. Edgar Mervyn Grace.  In it he wrote: ‘It was in 1870 in September that E.M. brought an eleven to play against Thornbury who had run some sort of Club as early as 1852.  The game was played against 22 of Thornbury on the field at the back of what is now Browning’s Antique shop to the north of Park House.  It is recorded that 23 of the Grace family watched the game.  E.M. made 211 not out and G.F. hit a ball right through a lady’s parasol like a bullet.  Frank Gayner, Sidney’s father, played in this game, and though very short in stature bowled a very fast round arm‘.

Francis married Jane Goodson in the Bridgewater area in 1880.  The 1881 census shows they had settled to live at 15 The Plain where Francis was a draper and milliner.  Two of his staff were living with the family: Lucy Sainsbury a milliner aged 20 and John Sainsbury, an apprentice draper aged 14, both born in Thornbury.  Henry’s wife, Jane, was born in Borough Bridge, Somerset about 1848.  They had a son, Francis Harry, baptised in Thornbury on 30th July 1881 before Jane died aged 33 and she was buried on 11th October 1881.

On 9th November 1881, Francis bought two properties in Castle Street, later known as 24 & 26 Castle Street.  These were bought from Francis Driscoll to whom Francis Gayner had provided a mortgage to enable him to buy the property.  The total cost of the two properties was £305 out of which Francis was able to deduct £255 12s 6d being the amount owed to him, plus interest.  As far as we know Francis never lived in the two houses.

Francis married for a second time in 1885.  This time he married in the Chippenham area and his wife was Lucy Harriss.  Lucy was born on 1st January 1858.  The 1885 rate book shows Francis owning and occupying a house on the junction of Castle Street and The Plain, and records sometimes show the address in either of these streets.  We believe it was the building which later became known as 15 The Plain, which is where Francis and his family were living at the time of the 1881 census.

The records of the Thornbury Cricket Club show that Francis was interested in cricket.  The following thumbnail sketch was written about him by Edgar Mervyn Grace:

Frank Gayner – played for Thornbury C. C. from its formation and was a very useful and untiring round arm fast bowler.  Owner of a high class draper’s shop in the High Street, and was descended from an ancient Thornbury family, whose crest was a ‘Hedgehog’. 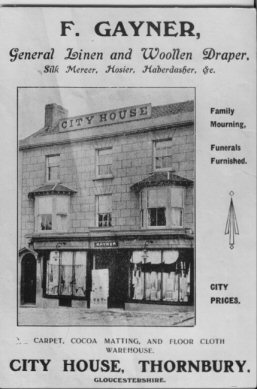 By the census of 1891, Francis Gayner had moved from 15 The Plain and opened City House, the large premises at 25 High Street which is shown on the left.  At this time Francis was 40 and Lucy was 33 and born in Chippenham.  Their children were Sidney Harriss Gayner aged five, Marjorie aged three and Doris aged one.  Also in the household were Gertrude Hughes aged 27 and Celia Howell aged 24 both draper’s assistants, with Emily Spill, a servant, aged 17 and Rosina Martin aged 17, a nurse.  The 1901 census shows them there.  It is interesting to see from the 1905 and 1910 Rate Books that Francis has acquired a considerable a mount of property in Thornbury.  In addition to 24 and 26 Castle Street and 15 The Plain, he now owns three properties in the High Street including City House and number 69 High Street. 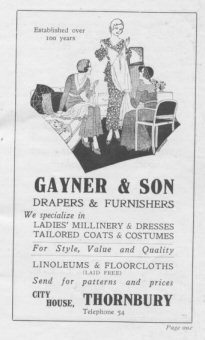 Francis died on 24th October 1923 aged 72.  He had been a guest at the Homage Court Dinner at the Swan Hotel when he was taken ill.  He was immediately taken home, but never recovered.  Lucy moved to live in 10 The Plain and she carried on living there until here death on 5th February 1955 when she was aged 97.  Her son, Sidney took over the draper’s shop at 25 High Street and the premises at 23 High Street was let out to tenants including William Blizzard and later Charles Baldwin.  On 29th August 1954 Lucy sold 23 and 25 High Street to the Bristol Co-operative Society for £10,000.

Tytherington Tennis club.  She was in her last year at St Margaret’s School in Henleaze Bristol, where she was popular with her fellow scholars and the staff alike.”  Marjorie later moved to Falmouth in Cornwall to live with her sister, Doris.  Marjorie died there on 14th December 1965.  We think she was buried back in Thornbury as there is an entry in Pitcher’s accounts book for her funeral, although there is no mention of transporting the coffin back to Thornbury.
Toggle Sliding Bar Area