Alfred Gill and his family 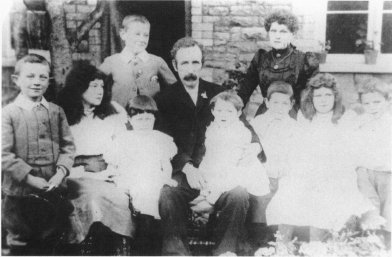 Alfred Gill and his family about 1900

Alfred was born in December quarter 1861 – his birth was registered in Bedminster, Bristol.  He was the son of George Gill, a coal miner and his wife, Emma.  In 1871 the family were living in Coalpit Heath.  We don’t know where Alfred or his family were in 1881.

Alfred married Sarah Ann Stevens in Thornbury Congregational Church on 17th October 1887.  Sarah was born in Birmingham about 1862 but she was living in 21 St John Street with her parents, Joseph Stevens, an engine driver and his wife, Caroline.  Alfred was working as a fireman on the railways at the time of his marriage.

We have a collection of photographs of the Gill family.  Click here to see them

In 1891, Alfred and Sarah Ann were living with her father in 21 St John Street.  Her mother Caroline had died in 1886 aged 66 years.  Alfred was now described as a ‘railway engine stoker’ and he and Sarah Ann now had 3 children: Bessie aged 2, Alfred aged 1 and Stella aged 7 months.

Joseph, Sarah Ann’s father, died aged 74 years and was buried on 21 January 1896.  Alfred and Sarah Ann continued to live in 21 St John Street for a short time.  The notice of sale for the house printed on 15th February 1895 shows Alfred Gill as the occupant and the indenture relating to the sale of the property by Thomas Honeyborne to Albert Edward Bevan mentions that the house is being occupied by the ‘Representatives of the late Joseph Stevens’.

The photo above shows Alfred and Sarah Ann with 8 of their 11 children outside Jubilee House.  The children were left to right – William, Bessie, Alfred Jnr (back), Nellie, Ruth, Hector, Stella and Evelyn. 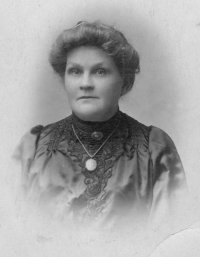 Alfred retired from his work on the railways on 31st December 1928 after 48 years of service with the London Midland and Scottish Railway, most of which were spent on the Yate and Thornbury branch line.  He was presented with a framed certificate to commemorate this.

Of their children:
Bessie – married Oliver Charles Vernon Marsh the youngest son of Mr and Mrs J Marsh of Kendalshire on 29th June 1911 at St Saviours Church, Coalpit Heath.  They had one son named Donald.

Alfred – was a carpenter in the 1911 census.  He married Emily Higgins in 1913 and they lived in 8 St John Street – click here to read more

Stella – was a school teacher in the 1911 census.  The photo on the right was taken in 1914 from a photograph of the Council School Class 3 when Stella was the class teacher.  She married Richard Frederick James Warren, a printer in 1916.  They had one son, Benjamin.

Hector – was a tailor in the 1911 census.  He married Alice May Cripps in 1918 in Tuffley Church, Gloucester.  Alice was the daughter of Mr & Mrs W. J. Cripps, of Dunsbourne House, Reservoir Road.  Hector was known locally by the family as ‘Peck’.  They had 3 sons: William, Douglas M and Anthony.  In 1935 when his parents’ home was sold Alfred was described as a rate collector of Thornbury.

Evelyn – was a carpenter in the 1911 census.  He was killed by shell fire whilst carrying a message to Company HQ in France on 9th August 1917.  He was aged 24 and serving with 1st/4th Battalion Gloucestershire Regiment.

Nellie – was an apprentice in a drapery in the 1911 census.  She married Hugh Cecil Burgess in 1921 and lived at 10 Pullins Green – click here to read more

Ruth – married William C Mills the son of Mr and Mrs Henry Mills of Cross Roads in Hill in 1927.  Ruth was known by the family as ‘Toots’.  They had two daughters, Sallie and Diana (whose nickname was ‘Blossom’) and one son, Gordon.

Effie – married Alfred (or Albert) William Watkins in December 1927.  The newspaper reported that he had been a bank clerk at the Westminster Bank in Thornbury for many years.  The couple were expected to settle in Tockington. They had two sons, John and Trevor. Effie died in 1985.

Connie – married Leonard Charles Peacey on 10th April 1939.  They settled in Thrupp near Stroud where they had one daughter, Elizabeth. Connie died in 1965 aged 58.

ul to Carolyn Figg, a grand-daughter of Connie Gill for sending us a wonderful collection of photographs of her family.  Click on the thumbnail below to see one taken of the surviving children of Alfred and Sarah Ann which was taken in 1952 at Bessie’s Ruby Wedding.