Francis Henry Grace was born on 30th December 1878 at Park House in Thornbury.  He was the second son, and ninth child of Dr Edward Mills Grace, physician and surgeon, and his wife, Annie.

Having been born into the Grace family, he took up cricket like his father and his well-known uncles who included W. G.  Francis started playing at the age of 12 years and a year later made his first appearance for Thornbury.  He played his last game for the club at Stroud on 31st July 1948 when he had the misfortune to pull a thigh muscle.  He had a playing record of over 56 years for Thornbury.  At school in Long Ashton and later at Wellington College, Shropshire he was a good opening batsman and a clever bowler.  As a fielder he was keen and extremely quick off the mark.  He was joint secretary with Edgar Grace of the Thornbury club in 1910 and in 1911 was elected vice-captain.  Since 1919 he had been an active member of the Committee, becoming vice-president in 1948.  Francis was also good at other sports.  He was a good long distance runner and broke a record for the mile.  He was a powerful swimmer, good tennis player and he played as centre forward for Thornbury Football Club for many years. 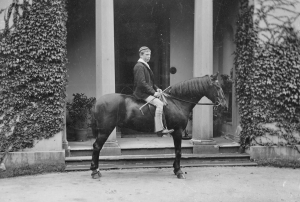 We are grateful to Les Summerfield, Thornbury Cricket Club and Mike Grace for allowing us to see the documents written by Francis’s brother, Edgar Mervyn Grace, on the history of the Cricket Club.  These included the following thumbnail sketch about Frances:

‘F. H. Grace – second son of E. M., Francis, who was born at Thornbury on December 30th 1878, was very short and slight of build, but amazingly agile and active.  In his 13th year he took part in the Graces versus Robinsons match on the County Ground at Bristol and fielded very well.  The following year he played his first game for Thornbury and carried on for the next 56 years, during which he was Joint Secretary with Edgar in 1910 and 1911 when he also vice-captain, and from 1919 until his death thirty years later he was a very keen Committee member and was elected Vice-President in 1948.

A great wit, Francis was an extremely popular member of the Club and a good steady opening batsman, holding a very straight bat, left elbow well forward, with a powerful slashing cut, unusual for such a small person.  On several occasions he dealt with short balls or ‘bumpers’ as if he were serving at tennis with great effect.  In 1941 in his 63rd year, he was third in the Thornbury batting averages with an average of 24.50 and a top score of 63 – one run for every year of his life.  1941 marked the Centenary of his father’s birth and in the match at Downend he opened the innings with his brother, Edgar, scoring 20 and running out a Downend batsman with a magnificent pick up and throw in from extra cover, but during that year he had the misfortune to fracture his left arm when facing a fast bowler.  His best all-round performance was when he not only captured all ten wickets but also made 28 not out for the ‘Old Boys’ of Wellington College (now The Wrekin) against the School and Masters.  At school, apart from cricket, he was a very good long distance runner and broke the mile record.

Francis bowled legbreaks round the wicket with an easy swinging action, commencing with his hand and the ball behind his back, and was often very successful.  His fielding was always very good and keen, being exceptionally quick off the mark, while he especially excelled when fielding at forward square-leg (midway between the bowler’s wicket and the square leg umpire) to his father’s ‘lobs’ where he caught many catches which would not have been reckoned even a chance to an ordinary fielder.  Being absolutely fearless, he never turned his back on the hardest hit’.

We have two little stories about Francis taken from Edgar’s notes.  When Edgar started at Wellington College, Francis had already been there for two or three years and had been asked to look after his younger brother.  Being a practical joker Francis gave Edgar a ‘soap pill’ to suck to cure his snoring.  Edgar ended up with a lot of foam in his mouth.  Francis also had a habit of crawling under boy’s beds and heaving up the mattress until one bed collapsed on top of him and cut his head badly.

On August 7th 1907 at the Congregational Chapel in Thornbury Francis married Helen Garfield Cullimore.  The wedding was a double wedding with Albert Edward Bevan marrying Kate Elizabeth Anderson at the same time.  This was because the brides were cousins and the couples must have been close friends as they spent their honeymoons together in Llandudno.  Helen was born on 22nd October 1887, the daughter of Edmund Cullimore, the owner of the Saw Mill and Brickworks, and his wife, Sarah.  The photo on the right was taken of Helen (known as Nellie) in 1932.

Francis’s main interest was electricity and we understand he had trained as an electrical engineer at Bristol Technical College and had worked for R A Lister Company at Dursley.  In spite of his father warning Francis not to get involved in the business of electricity, he is credited with the introduction of the new form of power to Thornbury in 1906.  We suspect that Francis was encouraged and financially supported by his father-in-law, Edmund Cullimore.  It was Edmund’s saw mill which was the initial source of electricity and its main customer.  The earliest electricity in Thornbury was produced by burning the waste from the Saw Mill and this initially powered the saws directly.  Later a bank of electrical accumulators had been installed nearby and a few houses in Thornbury received DC electricity.  The electrical power supply was used by Francis Grace to introduce the cinema to Thornbury when the Thornbury Picture House was opened in 1919.  The situation was formalised on 9th June 1927 when Francis Henry Grace applied to the Electricity Supply Commissioners for authorisation “to supply and distribute electrical energy for all public and private purposes” within ” the circumference of a circle having a radius of one and one-third miles and having its centre at the Saw Mills Thornbury.

When there was a danger of Francis and Helen moving to Canada, Edmund used his influence with the Thornbury Gas Company (in which he had already acquired an interest) to ensure that Francis became Secretary for the Thornbury Gas Light and Coke Company.  When the demand for gas expanded and a new showroom was required, Edmund provided a suitable site in St John’s Street and a new building with showroom was provided in 1932.  Click here to read more

Francis was also credited with the idea of building a cinema in Thornbury.  He had apparently been organising a travelling cinema which toured the district in an old Ford car driven by Albert Pridham and Ron Dent.  After the War Francis’s father-in-law wanted to do something for the Town and asked his daughter what she would like to see here.  She told him him she would like a cinema and he gave her (and the Town) one.  Edmund acquired the land and had the cinema built and it was opened in 1920.  He appears to have given it to his daughter and set up Francis as the Manager.

Francis and Helen lived in West Shen from the time of their marriage in 1907 up to Francis death.  He died on 29th May 1949 aged 70 and was cremated at Arnos Vale.  A notice in the Western Daily Press of 10th October 1950 described him as senior director of Edmund Cullimore Ltd, Saw Mills, proprietor of Thornbury Picture House,  Secretary to Thornbury and District Electricity Co., and a former Secretary of Thornbury Gas Co.  The notice said that his estate had been valued at £16,073.

Helen carried on living there, but following Francis’s death, she shared the big house with others.  The 1970 Electoral Register shows that her daughter, Sally Gordon was living with her.  Helen died aged 90 on 6th May 1972.

Click here to see our album of Grace family photographs

Francis and Helen had several children: 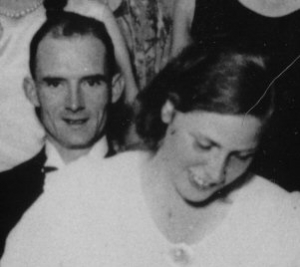 Sally – born in September quarter 1911.  It is fortunate that Sally was interviewed in 1994 by the Thornbury and District Oral History Society and the resulting tape of her memories is available in Thornbury Library.  Sally first attended Miss Ann’s Dame School in the High Street and was then educated at home with her sisters and brother by Mabel Trayhurn before being sent to boarding school at Northumberland House, Henleaze in Bristol.  Eventually she left there for Thornbury Grammar School and then went on to Art School in Bristol.  Sally made her own contribution to Thornbury life through her painting and embroidery skills.  She assisted her family in putting on various theatrical productions at the Picture House by designing sets and costumes and often taking on an acting role as well.  The photo on the right was taken of Sally at her 21st birthday party which was held in a room above the Picture House.  The gentleman standing behind Sally was William ‘Jock’ Gordon whom Sally married in June quarter 1937.  They settled in Downend in Bristol area where they had Alistair in March quarter 1941, Robert F born in December quarter 1943, Felicity in September quarter 1945 and Elspeth in March quarter 1947.  The Gordons moved on up to Gloucester.  In 1969 Sally returned to Thornbury to look after her mother after William Gordon, her husband, died.  The 1970 electoral register for Thornbury shows Sally and her son, Robert, were then living with her mother at West Shen and they were still living there in 1975 and 1980 after Helen had died.  Sally’s artistic work was the subject of an exhibition of her work at the town’s annual art festival.  Sally died on 24th April 2003 aged 91 and she was buried in the same grave as her grandparent in Thornbury Cemetery. Elizabeth – born in June quarter 1913.  The photo on the left was take of Elizabeth in 1932.  Elizabeth married Dennis Haley in September quarter 1938.  They seemed to settle to live in Shen with Elizabeth’s grandparents, Edmund and Amy Cullimore.  During the War Dennis was a pilot officer in the RAF Voluntary Reserve.  They had Penelope born 5th June 1942, Jonathan born on 5th November 1944, Francis born 18th November 1947 and Angela born 7th June 1949.  After the War the baptism records show Dennis was working as a timber merchant so it seems likely he was involved in the management of Edmund Cullimore’s Saw Mill.  They continued living at Shen until at least 1954, but there is no sign of any Haleys in Thornbury after that date.  We understand from Sally Gordon’s interview that the family moved to Kidderminster.

Marguerite Elsa – born in March quarter 1921.  The photo on the right was taken of Marguerite at Sally’s birthday party in 1932.  Marguerite married Dennis W Wood in December quarter 1945.  We understand from Sally Gordon’s interview that Dennis was a vet and the family settled in Gloucester.