An indenture of 28th April 1900 between George Herbert Hall and James Arthur shows that George bought what is now 22 Castle Street in Thornbury for £185.

“All that messuage and tenement and garden with the appurtenances ….. and also all that messuage or tenement or part of a messuage or tenement comprising a room or lower room formerly called the shop and the buttery thereto adjoining with the chamber over….wherein John Putley deceased formerly dwelt situate and being in the town and borough of Thornbury in the county of Gloucestershire there called the High Street adjoining to a close formerly called Wigmores.” We are greatly indebted to Mary Webber and her niece Cynthia Shaw for their lovely collection of photographs and all their information about the Hall family.  As well as the photographs shown on this page we have also uploaded all the photos from their collection on our Family Photo Albums.

From this collection we know that George Hubert Hall’s birth certificate shows that he was born in Back Street (St Mary Street) on 2nd April 1868 to Walter Hall a publican and his wife Alice Cooper Hall nee Hughes.  The informant of the birth was Sarah Hughes of Back Street.  This would be George’s grandmother, Sarah.  Read about Samuel and Sarah Hughes.  George Hubert Hall was baptised in St Mary’s Church on 13th November 1870.  It is noticeable that many subsequent records refer to him as George Herbert Hall.

We do not know when George moved to Wales or for how long he lived there.  We do know he was very involved in sport in Thornbury, especially football and rugby and his family have a particularly fine photograph of him and Thornbury Rugby team which may have been taken between 1883 and 1886 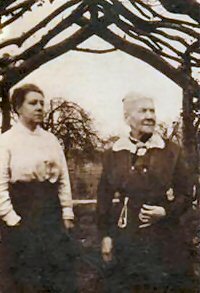 By the 1891 census George’s father had married for a second time. Laura, Walter’s second wife, was from Thornbury.  Walter and Laura had six children in the household, the oldest of whom was George. The family was living in Roath in Glamorgan in Wales. George’s father, Walter was a labourer and George himself had become a plumber.

We do not know when George moved to Thornbury.  However he was living there by 1893 as on April 3rd 1893 (an Easter Monday) he married Frances Elizabeth Boulton at St Mary’s Church in Thornbury.  On the marriage certificate it clearly says that George is called George Herbert Hall.   Frances was the daughter of Philip Boulton a carpenter and his wife Mary Rachel nee Thurston of Thornbury.  The marriage certificate also shows that George’s father Walter was described as a railway porter.  The witnesses were Percy James Balls and Elizabeth Mabel Mary Boulton.

Frances Boulton was obviously an active member of Thornbury Parish church as she was not only baptised there in 1868 but confirmed there on March 14th 1885 also.

On his marriage certificate George gave his address as “Wellfield” which we believe refers to an area in Kington Lane, not specifically the house now called Wellfield.  It seems likely that that they actually lived in the property now known as The Hollow, which was Francis Boulton’s family home. 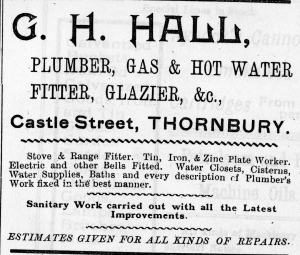 The couple seem to have stayed at “Wellfield” for the first few years of their married life as we have a letterhead from George Hall dated April 1900 which gives his address as “Wellfield.”

George Hall was one of the original members of Thornbury Fire Brigade when it was formed in 1899.

The 1901 census shows George Hall aged 32 was a plumber and gas fitter living at 22 High Street.  His wife Frances was the same age. Their sons Godfrey and Thurburn were seven years and four years respectively.  Above on the right we have an advertisement for George Hall dated 1904. 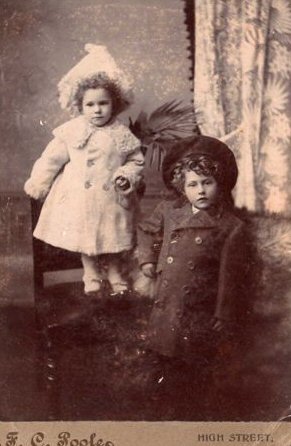 The 1911 census shows George Herbert Hall aged 43 and a plumber living with his wife Francis Elizabeth aged 42 both were born in Thornbury.  Their two sons lived with them. Godfrey Herbert Hall aged 17 was a draper’s assistant and Thurburn Slade Hall was aged 14.

George was a well known plumber in Thornbury and appears to have installed many of the early bathroom fittings locally.  Thornbury Museum has a lavatory cistern with the name of George Hall marked on it.  Anyone researching the family can see it there.  There is another similar cistern in the outside lavatory of Epworth House, although sadly this is not plumbed in.

The photograph on the left above shows Frances Hall with her mother Mary Rachel Boulton who died October 15th 1923 aged 79.

Frances herself died the following year on May 11th 1924 aged 55 years.

George married for a second time in Bristol in 1928.  His second wife was a widow Florence Lavinia Wilcox nee Pegley.  Florence was born 8th May 1890.

We assume that Florence Hall may have continued to live at 22 Castle Street as she appeared in the 1950 Electoral Roll for Castle Street.  By 1954 she had moved to 9 Pullins Green.

We understand that the Hall family continued to own 22 Castle Street until it was bought by Ann and Barclay Riddiford.

Of the sons of George and Frances Hall

Godfrey Hubert Hall was born on 12th November 1893.  He was baptised on 4th April 1894.  The records of St Mary’s school show that he was enrolled there in April 1901, having first attended a private school.  He left St Mary’s to go to the Grammar School in 1905.  He was enrolled in Thornbury Grammar School on 14th January 1906.

We believe that he enlisted in the army in the First World War as early as 1914 because he was entitled to the 1914 star.  Godfrey Hall was on the list of men and women serving in the Forces which was printed in the Gazette dated 16th January 1915 and on a second list which was printed in the Bristol Times and the Mirror on 25th  December 1915.  Godfrey Hall was listed as one of “Bristol’s Own.”  His army records show that at the beginning of his army career he was in the 12th Gloucester Regiment. Later he was a Second Lieutenant in the 9th Devon Regiment.  In 1916 according to the Gazette, he was “a driver in France.”  His army records show he eventually became a Lieutenant in the Royal Army Service Corps.  The photograph on the left is a photograph of Godfrey Hall in army uniform.

Ida and Thurnburn lived lower down Castle Street in what later became Wellbourne Cottage.  Click here to read about them