Philip George Hawkins was born in Rudgeway in 1870.  He was the son of James Hawkins, a painter and paperhanger from Corsham in Wiltshire and his wife, Sarah Ann from Olveston.  The 1891 Census shows that Philip had become a painter and painter hanger like his father.  The family were still living in Rudgeway and the 1901 census shows Philip was still living at home although he was now described as a builder and decorator.

In June 1907 Philip sent out a memo to his customers advising them that the partnership of James Hawkins & Son had been dissolved and informing them that he had set up business on his own account at his address in Rudgeway.

In late 1908, Philip acquired the house and builder’s yard and outbuildings in St Mary Street which had previously been used by the Burchell family. 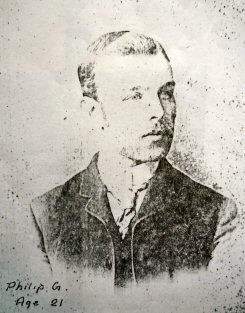 We are fortunate that Thornbury Museum have the diary which Philip wrote in 1909.  This shows that the house was already called ‘Warwick House‘ before Philip moved in.  This implies that the name was given to the house by the Burchell family although we haven’t seen any confirmation of it being used in their time.

On Tuesday 12th January 1909 Philip married Mabel Isaac.  Philip’s diary notes that was ‘Red Letter Day – I, P.G.H. was married to Mabel Isaac at Yate Church at one o’clock.  Had nice day and brilliant sunshine.  Will Jones, best man and Mina bridesmaid.  Drove from here (Warwick House) in Swan carriage and came back from Hall End about eleven o’clock.  Enjoyed the day very much as I think everyone else did’.  He also notes that the bells were rung at Yate.

Mabel was one of twin sisters born in 1880, daughters of Augustus W Isaac and his wife, Esther.  The Isaac family lived at Hall End Farm, situated on the lane running between Rangeworthy and Wickwar.  The 1881 census shows that the farm consisted of 203 acres at that time.

Philip’s diary notes that they honeymooned at home and they were busy on the first day moving things from the Castle Hotel where Philip appeared to have been lodging for two weeks prior to the wedding.  He also notes that he did some office and estimating work on the day following the wedding and after that it was business as normal.

Philip and Mabel had three sons: Leslie James born on 9th June 1914 and baptised on 8th October 1914, Lyndon Augustus baptised on 5th November 1916 and Derek Philip Isaac baptised on 4th May 1919.  We have only seen the school records of Lyndon and Derek – both boys started school at private school (in Derek’s case we know this was Miss Ann’s school) and they then transferred to the Council School before going on to Thornbury Grammar School.  All three boys were members of the St Mary Church choir along with their father.

In early December 1921 Mabel caught a chill and after about 10 days this developed into double pneumonia.  She died on 12th December 1921 aged 42.  She had been a member of Thornbury Womens Institute and Thornbury Mothers’ Union. Philip’s business interests expanded as time went on.  The trade directories describe his business as ‘builders, contractors, wheelwrights, undertakers and decorators.  They replaced Tucker Brothers as being the biggest building firm in Thornbury and were responsible for many major building projects in the area including the building of Grace and Henderson Wards at Thornbury Hospital.  As well as having use of the workshops behind Warwick House with access from Horseshoe Lane, in 1924/5 he acquired two very derelict buildings in Silver Street and one adjoining building in St Mary Street which he demolished and rebuilt as two ‘modern shops’ using yellow Cattybrook bricks.  See photo.  This provided him with an office and a shop where he sold builder’s and decorators materials, wallpapers and ironmongery.  Read about this property. It also made a far more attractive outlook from Warwick House looking across St Mary Street.  He then sold this house and the adjoining shop unit he had built to Thomas Ball.

Philip continued living in Warwick House.  However he developed an interest in farming and became the owner of Severn View Farm which consisted of 45 acres on Severn View Road, Morton.  We are told that he never moved to live on the farm but spent a lot of time there.  A friend of the family has mentioned that he was particularly fond of Philip’s horse called ‘Blossom’.  His obituary also mentions that Philip was a keen churchman, being a member of the Thornbury Parochial Church Council for many years.  He was Secretary of the Thornbury District Master Builders Association.  His keen interest was singing and, as well as singing in the Church choir, he was a member of the Thornbury Society of Gleemen, a local singing group.  He was a special constable for many years and a few months before his death he received a long service medal from the Chief Constable. Philip died on 8th August 1937 aged 67.  The 1938 electoral register shows that Warwick House was occupied by Leslie and Lyndon Hawkins.

The 1939 trade directory lists ‘P. G. Hawkins and Sons’ as being the name of the business.  It carried on trading from the yard in Horseshoe Lane until the whole site was acquired by the Council for development in the late 1960’s.  In 1958 the firm had had a new shop built at 49 High Street on the site of the private school run by Mabel Trayhurn.  This replaced the shop which had been on the corner of St Mary Street and Silver Street which was taken over by Dorinas, a hairdresser.  They also acquired other properties in the neighbourhood including 8 St John Street, 6, 8, 10, 12 and 14 St Mary Street and part of 7 Silver Street.  When their premises in Horseshoe Lane was closed they

opened a new store for their building materials on the Thornbury Trading Estate, but this closed after several years, never quite achieving the appeal of the hotchpotch of rambling buildings in Horseshoe Lane.

(Click on the thumbnail on the right to see a view of the Yard from Horseshoe Lane).  The shop at 49 High Street continued selling household products and smaller building materials and it continued using the name of ‘P. G. Hawkins’ until at least 1973.  It is still there operating as ‘Hawkins of Thornbury’ although it has changed hands and the Hawkins family is not involved.

We have attached a separate page giving the personal account of the family’s history written by Derrick Hawkins in 1991.  Click here to read this document

Leslie James Hawkins – became a master builder and took over Warwick House from his father and shared the running of the business with his brother, Lyndon.  On 9th September 1939 Leslie married Joan Mary Goss, who was born on 22nd January 1913, the daughter of Arthur Goss, a retired draper from Top Meadow, Old Down.  Leslie and Joan took over the house and continued living in the house until at least 1958.  During the War Leslie became leader of a squad in the demolition service and was an ARP Warden.

Lyndon Augustus – he also became a master builder and shared the running of the business with his brother, Leslie.  In 1942 Lyndon married Kathleen M. Olive in Thornbury and the 1946 electoral register shows that they were then living in the top flat of The Elms, 26 Gloucester Road.  They then moved to live at Rudgeway before returning to Thornbury in the early 1960’s to live at Park House, 12 High Street.  Several indentures involving the Hawkins Brothers in the 1967 and 1968 period show that both Leslie and Lyndon were at Park House, although they referred to their address at the time as ‘Hawkins House, High Street’.  Only Lyndon and Kathleen are listed as living in Park House in the 1965 and 1970 electoral registers.  We understand that they moved from the big house to the Coachouse of Park House and then they moved to the Stables.  Lyndon and Kathleen had two adopted children: Rosemary and John.

Derrick Philip – served in the Royal Engineers during the War and he took part in the evacuation from Dunkirk and later saw active service in Sicily and Italy campaigns.  After the War he became an engineer with the West Kent Main Sewerage Board and then worked for 6 months with the Middlesex Main Drainage Board. Derrick was very interested in motor bikes and motor cars.  In 1949 he left for Canada on the ‘Ascania’ with the intention of taking up a business appointment there.  Derrick planned to travel by motor-cycle on the 4000 mile journey between Montreal and Vancouver. An article in the Gazette in 1955 mentioned that he had just been appointed borough surveyor to West Vancouver City after being a borough surveyor at Kittimat 500 miles further north.  We are grateful to Derrick for writing a brief history of the family, a copy of which was given to Thornbury Museum.  Click here to read his personal account of the family history