Oliver Higgins (shown here above) was born in Coaley, near Uley on 14th April 1864.  He was the second son of Jephthah and Charlotte Higgins (nee Spencer) who had a large family: four sons and at least seven daughters.  Jephthah was a blacksmith and he moved from Coaley to live in Falfield around 1865.

Three of their sons, Jeptha, Oliver and Luther, followed in their father’s footsteps and became blacksmiths.  We think that their fourth son, Gilbert, also became a blacksmith, but he died in 1888 aged 21.  Two of his sisters were identical twins who were given the unusual names of Blanche Phyllis and Phyllis Blanche.  Although Blanche Phyllis moved off to live in Bristol, it is interesting to note that when she died in Bristol in 1953 aged 80, she was buried in Thornbury Cemetery on 10th July 1953.

We were delighted that we have a number of photos of the Higgins family.  Some of these were too good to leave out of this website although, apart from Oliver, none of his siblings had connections with Pullins Green.  Please click here to see the  album

Oliver chose to carry out his business at 13 Pullins Green in Thornbury.  By an indenture of 29th September 1885 Mark Williams of Pullins Green let Oliver Higgins, then of Falfield, the shoeing and jobbing blacksmith business previously carried on by Mark Williams himself.  Oliver paid £79 15s 3d.  Oliver also undertook to use Mark William’s workshops for six months for the sum of £3.00 and after the expiry of the three months to let the whole of the dwelling house and premises then rented by Mark Williams.

Oliver became an active member of what is now the United Reformed Church.  The minutes of that church’s meetings show that Oliver transferred to that church from Penn St Church in Bristol in February 1887.  We have no explanation for this.

The 1889 Kellys Directory shows Oliver Higgins as an ironmonger in St John Street (which is what Pullins Green was often referred to in those days).  It is interesting that we have a handwritten transcript of the Wrights Directory of the same year (copied from an original in Bristol Records Office) and this shows ‘J. Higgins‘ as blacksmith and farrier, Pullins Green’.  This may be the result of a mistake in the original document or a transcription error, but it might point to the fact that Oliver’s father or brother, Jeptha, was living and working in Thornbury.

On 15th November 1886 Oliver married Mary Ann King who was known as ‘Polly’.  The marriage took place in the Congregational Church, Thornbury.  According to the census Mary was born in Bristol around 1860.  On 29th September 1890 Oliver bought the property at 13 Pullins Green for £400.  He had previously been renting the house, forge and workshops from the joint owners, H. W. J. Carter and G. M. Williams.

Oliver specialised in work on Shire horses (as opposed to the hunters and ponies which were the speciality of Gilbert and Maurice Symes at their forge on The Plain).  Oliver was ideally located close to the Saw Mills whose horses used for hauling the timber were some of his most regular customers.  We understand that for many years Oliver carried out many of blacksmithing tasks actually in the lane outside his forge.  We have an early photograph here on the right of Oliver in his garden with a pile of used horseshoes.  Please click on it for a larger image.

After receiving complaints from other residents and even being prosecuted for obstructing the lane with the horses and their carts Oliver was forced to make other arrangements.  He acquired the fields behind the Baptist Chapel which he used for grazing his horse and for putting the metal rings onto cart wheels.  Oliver also specialised in ornamental ironwork and demonstrated his skills at shows, such as Malvern, Bath and West, Bristol, Shrewsbury, Nottingham and Dorset, where he won many prizes.  The photo below left shows Oliver with a sample of his ironwork.

In 1896 the Bristol Gazette reported that Oliver Higgins had been charged with neglecting his children by failing to have them vaccinated.  This was a common situation as many parents refused to comply with the legal requirement to have their children vaccinated against smallpox which was a major cause of death and disfigurement at that time.

The 1901 Census shows Oliver was then 37 years old.  He described himself as a “shoeing and general smith.”  His wife Mary was 41 and was born in Bristol.  Of their four children, Edith their oldest child was 13, Claude 8, Harold 6 and Nelson only 4.  Click here to read about Oliver’s children

On 18th April 1916, Mary Ann died aged 56 years.  Oliver married again.  His second wife was Emily Winifred Champion.  Emily was born on 28th April 1884 at her parents’ home, Owl’s Nest Farm in Alveston.  She was the daughter of William James Champion and his wife Elizabeth (nee Saniger).  In 1901 she was a servant for Elizabeth Williams in Weston Super Mare.   Oliver and Emily’s daughter, Joan Dorothy Higgins ,was born on 14th August 1917. 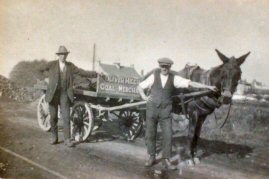 The trade directories show that Oliver extended his interests into the coal business, operating from the Thornbury Railway Station. We are not sure when Oliver first operated this coal merchant business.  There was a court case reported in the Gazette of June 6th 1908 concerning Oliver and one of his apprentices.  The case was brought about because the apprentice had left Oliver’s employ during the apprenticeship and this broke the terms of the apprenticeship contract and involved Oliver in extra expense.  During the account of the case it becomes clear that the apprentice was claiming he was not being properly trained.  He was spending too much time delivering coal.

Later the coal side of the business was managed by Oliver’s son, Nelson who had returned from the War with shrapnel wounds.  We have been told that Nelson had difficulties maintaining the business and that he sold part of his round to Alfred Davis in 1928 and when he finally gave up around 1935, the rest of the coal business was sold to Edward George Watts.

Oliver also acquired some property.  In 1927 Oliver acquired a plot of pasture land at Siblands which was known as Ingends.  This land comprised one acre, two roods and 37 perches.  On 27th August 1928 he purchased from Thomas Exell two closes of land fronting the road from Gillingstool to Sibland and known as Pigeon House Close and Gillingstool Leaze (and known by numbers 833 and 834 on the O.S. Map).  Oliver paid £500 for the land which comprised three acres, one rood and 34 perches.  We were told by Oliver’s daughter, Joan, that her father bought this land because he had got into trouble shoeing horses in Crispin Lane.

Oliver eventually retired as a blacksmith.  The business was continued by Oliver’s assistant, Fred Pearce, and then by his son, Donald until it finally closed in the late 1960s.

Oliver died on 22nd March 1942 aged 77 years.  In 1980 Nick Large, a Thornbury historian wrote an article on “The Rural World of Oliver Higgins”.  Click here to read the text

Under the terms of Oliver’s will his widow Emily was left the property at 13 Pullins Green, the two closes of land known as Pigeon House Closes and the plot of land known as Ingends.  Emily must also have sold the land at Gillingstool Leaze in the late 1950s for the building of the houses now fronting Gillingstool and St David’s Road.  We haven’t seen any documents relating to this sale.  On 18th November 1963 Emily sold Ingends land to Sibland Properties Limited for the development of the Sibland housing estate.

Emily died on 15th August 1975 aged 94 years.  In her original will written in 1946, she left sixty pounds each to her step-children Edith Higgins, Harold Higgins and Nelson Higgins.  The residue of the estate was left in trust to her daughter Joan Dorothy Higgins.  The will was amended in 1947 after the death of Nelson Higgins.

On 18th February 1980 Joan Higgins sold part of Pigeon House Close (Field 833) to the Trustees of the Thornbury Baptist Church for £3000 to enable them to extend the Chapel.  On 29th June 1983 Joan sold another part of the land at Pigeon House Close to the Baptist Men’s Movement Housing Association for £37, 500 to enable them to build the group of elderly persons dwellings in Colin Close.  In 1984 Joan let out the outbuildings of 13 Pullins Green to Dick Shipp for the storage of car accessories. We are not sure how long this arrangement continued.