A builder in Thornbury 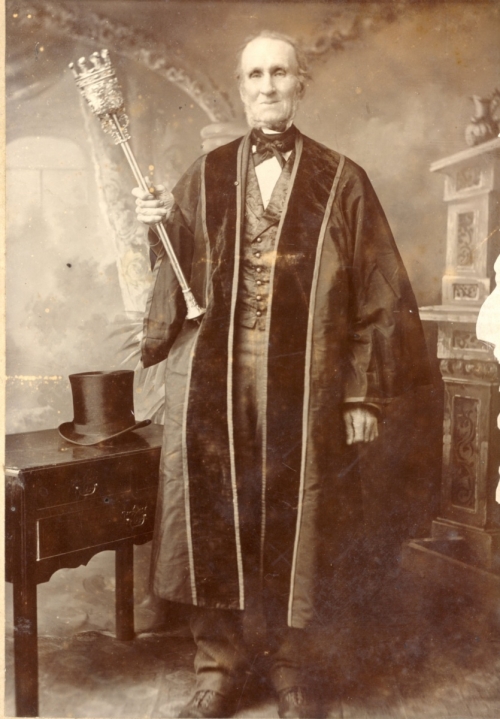 George was born in Tockington and baptized on 1st August 1819.  His parents were John Hodges, a builder and his wife, Sarah.  Read more about John and Sarah

George chose to follow in his father’s footsteps and take up carpentry as his trade.  The 1841 Census shows he was a carpenter journeyman living with his parents in Laburnum Terrace.

George married Mary Fairbrother in Thornbury on 1st June 1850.  Mary had been born in Abingdon, Berkshire, the daughter of James Fairbrother, an ironmonger.  Mary had a Thornbury connection as her father James had married Sarah Barton in Thornbury in 1824.

Mary Hodges (nee Fairbrother) died within a year of the marriage, on 27th April 1851.  Her death was perhaps caused by the birth of their daughter, Mary Fairbrother Hodges who was born about the same time.  Mary’s probate record shows that her estate was valued at under £200 and that she appointed her husband George as executor.

In the 1851 Census, George was a carpenter employing 2 men.  On 24th May 1853 he married again, this time to Tracey Staley, who was 10 years younger than George who was then aged 33.  She was the daughter of Joseph Staley, a farmer from Kington.

By the 1851 Census George was employing five men and two boys.  It is likely that he had he had now taken over the building of the last few houses in Laburnum Terrace.

This means that by the 1871 Census, George and Tracey had five more children.  They were now all living in Laburnum House (otherwise 6 Gloucester Road) which was to be their home for the remainder of George’s life.  The size of his carpentry firm had grown in line with his family.  He was now employing 10 men and 1 boy.

By 1881, he was calling himself ‘a builder’ and employing two of his sons, John and James as carpenters.  George was still working as a builder in 1891 when he was aged 71, and his third son, Austin was following in the family tradition by becoming a carpenter.

George had become a celebrated member of Thornbury society.  He was a mace bearer for the Town Corporation for 40 years.  He had the honour of leading the Town processions on days of national importance.  He first carried the Union Jack at the Coronation of Her Majesty the Queen Victoria in 1838 when only 18 years old.  He carried it on five more such occasions including the marriage of his Royal Highness the Prince of Wales in 1863, Victoria’s Jubilee in 1887; the marriage of the Duke of York in 1893 and Victoria’s Diamond Jubilee in 1897.

The final occasion was in 1902 at the Coronation of the new King when George was aged 82.  He was also involved in loyalist celebrations such as those following the announcement of the Relief of Ladysmith in 1900 – here George led the ‘feu de joie’, a gathering and firing of guns in salute.  Apart from his ceremonial duties as Sergeant of the Mace, George was responsible for letting the property belonging to the Town Trust and collecting rents from the tenants.

George was involved in many areas of Thornbury life.  St Mary’s School records show that in 1894 George Hodges “donated peas for the soup at the National School” and various newspaper articles in Gloucester Records Office show that he was a Committee Member for the Thornbury Flower Show in 1884, 1885 and 1888.

In the obituary printed in the Gloucester Journal dated 19th August 1905 it mentioned that George was “a retired builder and an expert connoisseur of old coins, paintings and antique furniture”.  Another obituary in The Dursley Gazette of July 1st 1905 has more about the coins; “A somewhat singular coincidence of the funeral was the fact that his valuable collection of old coins, which he for a number of years had made it one of his greatest hobbies to collect at considerable expense, was sold by auction at Messrs Sotherby’s in London on the same day that his remains were laid to rest.  Sometime previous to his short illness, which terminated in his death, he had consigned his collection of coins to the above firm, and the arrangement for the sale was so far advanced that it was found unpracticable to postpone the sale.”

Of the children of George Hodges 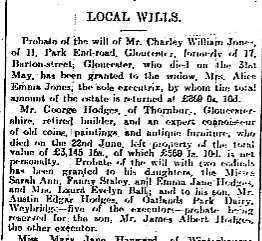 Report on George Hodges’s will

When George died he was the owner of four of the houses in Gloucester Road, five houses in Pullins Green and two houses in Raglan Castle (Upper Bath Road).  Ownership of his property was transferred to his Trustees, his four surviving daughters, Sarah Ann Hodges, Fanny Staley Hodges, Emma Jane Hodges and Laura Evelyn Balls and one of his two surviving sons, Austin Edgar Hodges.  George excluded his second son, James Albert Hodges who lived in Pullins Green and worked as a builder and wheelwright.

Over the years, these Trustees gradually died off and new ones were appointed to ensure that the Estate was managed properly.  The first trustee, Emma Jane Fry (nee Hodges), died on 14th January 1925.  This was followed in quick succession by Sarah Anne Hodges who died 18th July 1925 and Laura Evelyn Balls who died 5th December 1925.  Fanny Staley Hodges was appointed as her executrix and when she died 9th November 1927, Gladys Evelyn Balls, the daughter of Laura Evelyn Balls and Percy J. W. Balls, watchmaker and hairdresser, was appointed as executrix.

In 1954 the people with responsibility for managing the Estate, who were known to be members of the Hodges family, were John Hodges and Gladys Ball.

In 1961 the trustees were Gladys Evelyn Balls and Bridget McKearney.  Bridget, a school teacher spinster, was appointed to replace John Hodges who died on 11th February 1961.  We do not know the relationship between John and Bridget.  At that time, George Hodges’s estate comprised number 8 Gloucester Road and three houses in Pullins Green.

Gladys Balls died 31st August 1969.  Kathleen Mary Jones, a married woman of Cowhill was appointed as trustee.  At that time only No.8 Gloucester Road and an unspecified house at Pullins Green remained in the estate.

The houses were gradually sold off until only number 8 was left.  In 1971 the then Trustees, Bridget McKearney and Kathleen Mary Jones, sold 8 Gloucester Road, finally ending any connection between the terrace and the Hodges family.