James Albert Hodges who was born on 13 May 1863, the son of George Hodges and his second wife, Tracey (nee Staley).  James may have been born in Laburnum House at what is now 6 Gloucester Road.  Certainly the 1871, 1881 and 1891 censuses indicate that he was brought up there.  The 1891 census indicates that he was by then 28 and an unmarried carpenter.

James married Eliza Elmer on 21st November 1898.  The marriage took place in St Bartholomew’s Church, Montpelier, Bristol.  From the ages Eliza gave on the 1891 and 1901 censuses, she should have been born about 1855 in Warboys.  However, the records show that her birth was registered in St Ives in Huntingdonshire a few years before that, in fact in June quarter 1851.  In 1861 census she was a nine year old living with her parents, John and Jane Elmer in Front Street, Warboys.  Her father was a tailor.  After that her life seems to have been a little unsettled.  By 1871 she was a 19 year old servant at 12 Adelaide Crescent, Hove, near Brighton.  Then by 1881 she was a 26 year old governess at Wootton Farm, Folkington in Sussex.  From there she seems then to have moved to Gloucestershire because in 1891 Eliza was a servant at Canon House in Berkeley for William Legge, an auctioneer and wine and spirit merchant.

The 1899 rate book and the 1901 census shows James and Eliza living in number 17 Pullins Green with Jane Elmer, Eliza’s widowed mother who was aged 85 from Warboys in Huntingdonshire.

By the time of his father’s death in 1905, James was the eldest surviving son of a prosperous family.  He should have been the obvious heir to what must have been one of the the biggest building firms in the area.  However the story seems to have been more complicated than that.  His father’s will gives the first clue.  In 1900 George made his first will which left the income from all his properties to be divided into seven parts so that the four daughters, two sons (including James) and the family of John, the son who died, had equal shares.  A codicil of 1902 to this will indicates there may be a problem in the family. The codicil reads: “whereas my son James Albert Hodges is occupying a garden and premises of mine at Pullins Green and I am under a guarantee to Messrs Dimsdale’s Bank in five hundred pounds for him.  Now I direct that my said son shall not take any part or share in my estate until he shall have given to my trustees possession of the said garden and premises and shall have discharged my said guarantee and in the event of his not complying with either such condition I direct that the share of my said son in my estate shall devolve upon my other children and grandchildren named in my said will and for this purpose I limit him to six calendar months from my death.”

This sounds like a rift in the family but James’s father seems mainly to have been trying to be fair to his other children.  James must have continued working with his father up to the time of his death because the 1904 trade directory shows that he was a wheelwright and builder and his business address was Gloucester Road, presumably his father’s workshop.  His father even lent him more money as the second codicil dated 1905 shows that by then George had loaned James a further £150 (despite the fact that James had not paid back any of the original debt) and was still prepared to let James be an executor of the will.

James did not own his house on Pullins Green so why did he need all this money?  He seems to have been acquiring some property as the sum of £150 is referred to as being “the purchase money of the said garden of mine at Pullins Green I have sold him.” 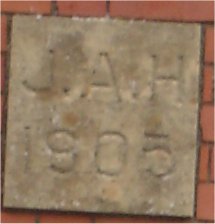 The date is of some significance here.  We have a plan of land bought by Edmund Cullimore for the sawmill site in February 1895.  This shows that the site of numbers 1 and 3 Pullins Green was on land owned by George Hodges.  The inscription on the builder’s stone on those two buildings reads “J. A. H 1905”.  It looks likely that the money borrowed by James was to buy the land from George Hodges and to build the pair of houses on it.  We also have the planning permission for the building of this pair of red brick houses and this is signed by James Hodges and dated April 26th 1905.

The 1911 census shows that James and Eliza were still in 17 Pullins Green.  The census also describes James as a retired builder.  James’s address was Pullins Green when his wife, Eliza died in November 1917 aged 62.  She was buried in Thornbury Cemetery on 8th November 1917.

James was listed as the tenant of the Pullins Green property in the 1926 rate book.  He is remembered as living there by Miss Higgins.  He died in 1927 and was buried in Thornbury Cemetery on 8th April 1927 aged 64.  His will showed he owned very little – presumably he had repaid his debt to his father’s estate.

“This is the last will of me James Albert Hodges of Thornbury in the County of Gloucester Contractor:

1.  I give to George Till Young of Morton Thornbury Surveyor my hammerless gun, my silver snuff box (the smaller of the two which are of the same pattern) and my gold lever watch by Barwise.

2.  All the rest residual and remainder of my estate of every description I give to Winifred Louisa Woodall a sister at the Royal Infirmary, Bristol absolutely.

3.  I appoint the said Winifred Louisa Woodall and George Till Young executors of my will and witness whereof I hereby set my hand this twenty sixth day of November one thousand nine hundred and seventeen.

This is a codicil to the above written will of me the above named James Albert Hodges whereas the above named George Till Young is now dead.  Now therefore I appoint as my executor in his place Frederick Henry Burchell of Thornbury aforesaid solicitor’s clerk along with the said Winifred Louisa Woodall.  In all other respects I confirm this my said will dated 16th June 1919.

The minutes of the Congregational Church in Thornbury in July 1927 noted that one of the houses which had been owned by James was bought by the Church for £750 from a ‘Mrs Skinner’.  The Church had offered to pay £725 for the house but Mrs Skinner insisted on the full £750. We discovered that Winifred Louise Woodall  (named as an executor of James’s will) had married Cedric G Skinner in Bristol in 1923 and therefore she became Mrs Skinner.

On the 23rd day of June 1937 Probate of this Will with one codicil thereto was granted at Gloucester. “