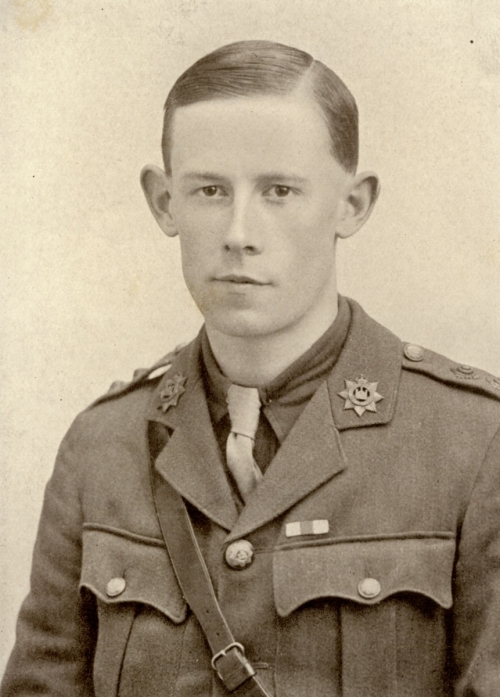 We have found a website created by Christ Church College Oxford on which there was the following information about William Noel Hodgson the son of Henry Bernard Hodgson, vicar of Thornbury.

William Noel Hodgson was the fourth and youngest child of the Rev. Henry Bernard Hodgson, Vicar of Thornbury in Gloucestershire, and his wife Penelope Warren.  His father was later first Bishop of St. Edmundsbury and Ipswich.

On the outbreak of war, he joined the 9th Battalion of the Devonshire Regiment.  He trained in England, before landing at Le Havre on 28 July 1915 and being sent to trenches near Festubert.  He was at the Battle of Loos on 25 September and was mentioned in despatches and awarded the Military Cross 14 January 1916 for holding a captured trench for 36 hours without reinforcements or supplies during the battle.

Promoted to Lieutenant, he spent some time in England before returning to France with his Battalion and was in the front line trenches at Fricourt in February 1916.  In April, they moved about a kilometre to the trenches opposite the town of Mametz. The trench was named Mansell Copse, and was in a group of trees.

He was killed on the first day of the Battle of the Somme, whilst attacking German trenches near Mametz. Due to the severe damage from German artillery fire, the British Front Line trench was unsuitable for the battalion to assemble in ready for the attack, so the men were about 250 yards behind. At Zero Hour the men of the 9th Devons advanced from their position behind the Front Line trench, with the 2nd Battalion Border Regiment on their left and the 2nd Battalion the Gordon Highlanders on their right.

The Devons had about 400 yards of No-Mans-Land to cross in the Carnoy valley before they could break into the German Front Line south of Mametz village.  As soon as the first men of the Devons reached No-Mans-Land they were exposed to fire from German machine guns.  Many were cut down in No-Mans-Land and the battalion suffered heavy casualties.

William was bombing officer for his battalion during the attack, responsible for keeping the men supplied with grenades.  Within an hour of the attack it is said that he was killed by a machine gun positioned at a shrine whilst taking grenades to the men in the newly captured trenches.  The bullet went through his neck, killing him instantly.  His servant was found next to him after the offensive had ended.  All but one of the officers of the 9th Devons were killed or wounded.

His body was retrieved that night and brought back into the British Front Line position, along with over 160 of his comrades.  They were buried in the vicinity of Mansell Copse.  A ceremony was held at the burial site on 4 July.  A wooden cross was put up by the survivors of the 9th and 8th Battalions of the Devonshire Regiment.  Carved on the cross were the words: “The Devonshires held this trench, the Devonshires hold it still.”  The graves were left in this position when the cemeteries were rebuilt after the war.  163 graves are now contained in the cemetery which is named “Devonshire Cemetery”.  All but one of the casualties are men of the Devonshire Regiment.

William had been writing poetry since at least 1913, and started publishing stories and poems in periodicals at the beginning of 1916, under the pen name Edward Melbourne. His posthumous volume Verse and Prose in Peace and War” which was published in London, by Murray in 1917, ran into three editions.

His poem ‘Before Action’ was written two days before he died.

By all the glories of the day
And the cool evening’s benison
By that last sunset touch that lay
Upon the hills when day was done,
By beauty lavishly outpoured
And blessings carelessly received,
By all the days that I have lived
Make me a soldier, Lord.
By all of all man’s hopes and fears
And all the wonders poets sing,
The laughter of unclouded years,
And every sad and lovely thing;
By the romantic ages stored
With high endeavour that was his,
By all his mad catastrophes
Make me a man, O Lord.
I, that on my familiar hill
Saw with uncomprehending eyes
A hundred of thy sunsets spill
Their fresh and sanguine sacrifice,
Ere the sun swings his noonday sword
Must say good-bye to all of this; –
By all delights that I shall miss,
Help me to die, O Lord.”