The rate books from 1827 to 1832 show that Stokefield House was owned by Adrian Stokes and occupied by Caddell Holder.   Rev Holder may have lived there longer, but we have no further Land Tax records and he was not there at the time of the 1840 Tithe Survey.

Caddell Holder was born about 1803.  He was the eldest son of Henry Evans Holder Esquire of Barbados.  In 1788 Henry Evans Holder had married Elizabeth Murray Holder a daughter of John Alleyne Holder and she had brought with her the dowry of a plantation and the “negro slaves belonging.”  Henry Evans Holder was the author of “A Short Essay on the subject of Negro Slavery with particular reference to the Island of Barbadoes” in June 1788.

In 1792 while residing at Redland in Bristol Henry published another tract defending “West Indian Merchants and Planters” against the abolitionists.  By the time Henry Holder made his will in 1816 he was living in Edinburgh.  We understand that his will shows that he had recently sold his sugar plantation.  At this time we can only suppose that Caddell was living in Edinburgh with his father as he was only 13 years old then.

In 1823 aged 20 Caddell matriculated to Trinity College Oxford where according to Jackson Oxford newspaper in June 1827 he gained his Bachelor of Arts.  He was ordained by the Bishop of Gloucester in 1827.

In 1829 he published “A Manual of Short Prayers.”  His wife Anne produced a son the same year.  Henry Evans Holder was baptised in Thornbury on 28th August 1829.  Sadly the child died within a year as the obituary of Henry Evans son of the Rev Caddell Holder of Thornbury appeared in The Gentleman’s Magazine in 1830.

A second son, Cecil Frederick Holder was born on 23rd March 1831 and baptised on 29th March 1831, whilst the family lived at Thornbury.

In 1831 on 5th November Caddell Holder conducted the marriage ceremony of Robarts William Elton of the East India Company and the 16th Light Infantry to Ashley Holder eldest daughter of the late Henry Holder of Barbadoes.

Caddell was awarded his MA in December 1831.

We know that Caddell continued to perform marriage ceremonies in Thornbury until at least 1833.

By the 1841 Census he was living in Moss Lane, Olveston with his wife Anne and their ten year old son, Cecil.

We know that the family later lived in Hanham, Little Sodbury and Bristol.  Caddell continued to move fairly frequently for over twenty years.  In the 1851 census Caddell Holder was staying with John Salter the rector of Iron Acton.  By 1856 he was minister at Avenbury.  He resigned from this post in 1858 and in 1862 he was made curate of Dunkeswell in Devon.

On the 4th June 1867 while they were living at the rectory St Juliott in Cornwall Anne Tierney the wife of Rev Caddell Holder died.

On 10 September 1868 Caddell Holder married Helen Gifford at Bodmin in Cornwall.  In 1870 while he was at the rectory in St Juliots in Cornwall his sister in law Emma Gifford was staying with him.  The church needed restoration and Thomas Hardy, then an architect rather than one of our greatest novelists came to supervise the work.  Emma subsequently became Thomas Hardy’s first wife.

We have found an account of this story by Michael Millgate taken from his book “Thomas Hardy a biography”: 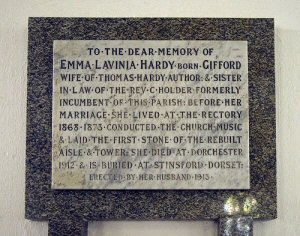 “Following the death of his first wife in 1867, when he was sixty-four, Holder married Helen Catherine Gifford, daughter of John Attersoll Gifford of Bodmin,….When the second Mrs Holder, thirty-five years her husband’s junior, moved into the rectory in the autumn of 1868 her younger sister, Emma Lavinia, came with her….chiefly, it would seem, as a way of escaping from the pressures of life at home with an embittered and often drunken father.  The situation at the rectory, however, was itself far from idyllic.  The rector, though generally tolerant and humorous in his outlook upon life, was subject to frequent illnesses, while Helen Holder’s loyalty to her husband did not change the fact that she had married a man so much older than herself in order to escape the alternative fate of a life as a governess or companion.  She was often at odds with her sister, and perhaps resentful of Emma’s freedom from domestic responsibilities, but ready enough to co-operate in any campaign to find her a husband.  Before Hardy’s appearance upon the scene a local farmer–probably John Jose, son of the widowed Cordelia Jose of Pennycrocker…..had been ‘nearly secured’ for Emma, but his active pretensions to her hand were no doubt exaggerated for Hardy’s benefit, …. There can be little doubt that Hardy’s engagement and eventual marriage to Emma Gifford were in some measure the calculated outcome of a conspiracy–if only of discretion…….involving the entire rectory household.”

The 1881 census shows Caddell Holder then aged 78 and Rector of St Juliot was born in Barbados West Indies.  He was living with his wife Ellen Catherine aged 43, who was born in Plymouth, Devon.  They had two servants, a cook and a house maid.

Caddell Holder died in 1882 on 27th November in Camelford Cornwall.  His will was proved on 21st December of that year.  His estate was valued at £1,428 1s 9d.  In 1883 Helen Catherine Holder a widow and sole executrix of Rev Caddell Holder of Thornbury claimed back his investments in National Stock.  Helen Catherine Holder died in the district of Fareham in 1900 aged 63.