of Pullins Green and Crispin Lane 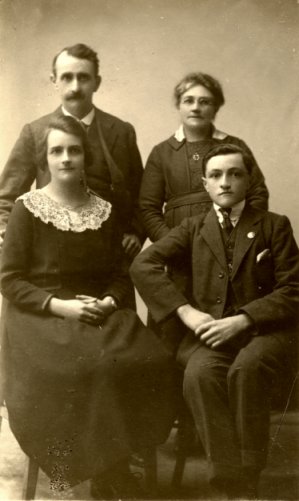 Frederick John Holley was born in Puriton, Somerset about 1868.  The 1871 census shows him living in Puriton with Jean Gibbs, an annuitant aged 86 born in Stogursey, Ann Holly a widowed grocer aged 46 born in Puriton and Susannah Maria Holley an unmarried dressmaker aged 24 born in Shapwick.  We had initially assumed that Frederick was the son of Susannah Maria, but the 1881 census shows Frederick living in Puriton with his mother, Ann a grocer aged 56.  Further research discovered Ann was the daughter of Jean Gibbs and she had married Isaac Holly in the Bridgewater area in June quarter 1860.  Isaac died in December quarter 1860 aged 40.

Frederick married Hannah Myers in Bridgewater in December quarter 1891.  Hannah was born in Bridgewater about 1869.  They had children, Bessie Ellen (known as Nellie) born in Bristol in 1896, Beatrice Annie born in Thornbury on 11th June 1898, Frederick George born in Thornbury in 1900 and Wilfred Herbert was born in 1905.  Frederick George died aged 7 months and was buried on 9th April 1901.  Nellie died in 1902 aged 6 years and she was buried in Thornbury Cemetery on 6th November 1902.

When Frederick and Hannah moved to Thornbury they appear to have lived first the house we now know as 4 Pullins Green.  They were shown as living there in the 1901 census when Frederick was a baker and confectioner, presumably employed by English’s in St John Street.

We know that the Holley family moved from Pullins Green to number 6 Crispin Lane.  We are not exactly sure when this happened.  The Council School records show that it likely to have been between 1902 (when the family were still living in St John Street aka Pullins Green) and 1905 (when they are shown in the school records and the electoral register as being in “Mutton Lane” which is another name for Crispin Lane).

The 1911 census shows them at 6 Crispin Lane which was described as having six rooms.  Frederick and Hannah were living there with Beatrice and Wilfred.  They also had one boarder, George Thomas Bell, a box maker at the Saw Mill aged 43 from Morton.  The Holleys were still living in ‘Mutton Lane’ at the time of the 1926 Rate Book.

The photo above shows the Holley family.  We know from other sources that Fred was a member of the Thornbury Brotherhood (a men’s social club associated with the Methodist Church) and a member of the Castle Cricket Club.  We have seen one report of a dinner of the cricket club in which Fred recited ‘An Absent-minded Beggar’.  In another concert he presented ‘A Humorous Recital in Somerset Dialect’.

Frederick died suddenly in 1928 aged 59 years.  The Gazette reported that he went to work at the bakehouse of T E English where he had worked for well over twenty years but at quarter past six he suddenly felt ill.  He had a seizure and died.  The obituary is especially nice.  It said that Frederick was well known throughout the area as a reciter of dialect monologues and that with his cheery personality he was always in demand at social occasions.  Apparently he was also the Secretary of Thornbury Liberal Association.  He was buried in Thornbury Cemetery on 22nd May 1928.

The 1939 register compiled in preparation for the war shows Hannah was living at 15 St John Street with Alice Tucker, who had recently been widowed.  Hannah is described as ‘housekeeper’.  She seems to have continued living there until Alice died in 1951. The 1954 register showed she was living with her daughter, Beatrice Annie and her husband, Ernest  Frank Biddle in their house at 21 Pullins Green.  She is shown in the electoral registers as living with them in 1935 through to 1954.  Hannah died in Thornbury Hospital on 15th January 1955 aged 85.

Wilfred Holley – the son of Frederick and Hannah seemed to follow in his father’s footsteps.  We have seen an account of a funeral of a Robert Perkins in 1918 in which Wilfred was one of the mourners.  Robert Perkins was also employed as a baker and confectioner at English’s bakery in St John Street.

Beatrice Annie – was educated at the Council School before being awarded a free place at the Grammar School in August 1910.  She was admitted to the school on 19th September 1909 and remained there for 6 years.  When she left on 28th June 1916 she had achieved Cambridge Junior exam in July 1914, Cambridge Senior exam in July 1915 and supplementary qualifications in George in December 1915 and History in July 1916.  On 4th September 1916 Beatrice became a student teacher at the Council Upper School.  On 8th September 1919 she became an uncertified teacher at the school.  In 1926 Beatrice married Ernest Frank Biddle.