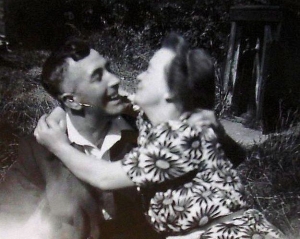 Bill and Doris Holpin and their children occupied 4 Saw Mill Lane from around 1927 to the early 1960s.  Bill’s brother, Frank Holpin, lived for a few years following his marriage in 1940 in number 1 Saw Mill Lane, a house on the opposite side of the lane.

Bill, properly known as William Edwin Robert Holpin, was born in Tytherington on 15th May 1900.  He was the son of William Holpin, a quarryman, and Celia Alice Smith who were married in 1899.  In 1901, Bill was aged 10 months living with his mother, Alice aged 23 born in Thornbury, and his brother, Arthur aged 2.  We know a little more about these Holpins.  Read more

Bill married Doris Constance Ruthers (or Ruther) in the September quarter of 1923.  According to the FreeBMDs website Doris’s birth was registered in Plymouth in 1902.  The 1939 register compiled in preparation for the War shows  her date of birth as 30th June 1902.

The 1911 census record which shows her living at Thornbury Workhouse says she was born in Ham and Stone.   She was living at Ham at the time of their wedding.

Bill and Doris lived in Rockhampton and then Eastland Avenue before moving to 4 Saw Mill Lane around 1927.  They had four children: Irene Grace born on 20 March 1925, Peggy born on 16 December 1926, Desmond born on 22nd August 1928 and Jean born on 27 November 1929.  The photos below both show the whole family.

Bill worked in both of Edmund Cullimore’s local businesses, the Saw Mills and the Brickyard, and we have been told that he finished up as foreman in the brickyard.  The 1939 register compiled in 1939 in preparation for the war describes Bill as a kiln burner in the brickworks.

We understand that William and Doris took in lodgers, usually men employed by the Saw Mill or Brickworks.  Two of these were Cyril ‘Sid’ Prickett who worked at the brickworks (shown as living with the Holpins in 1957) and George Fergusson.  William and Doris were still living in Saw Mill Lane when Doris died suddenly on 24th December 1960.  The obituary in the Gazette said that the funeral took place at St Mary’s Church in Thornbury.  William died on 1st January 1964.

See also our album of photographs of the Holpin family

Of William and Doris’s children:

Irene married in 1943 – her husband was Cecil Samuel Cousins who was from Lurgan in Northern Ireland and was known locally as ‘Paddy Cousins’.  He was serving with the Maritime Regiment when he met Irene.  The photo on the right shows them with their 3 children: Michael Robert born in 1944 and Valerie Jean born in 1945 and Denise born in 1950.  They had another daughter, Annette Lynne born on 15th October 1953.  The family continued living at 4 Saw Mill Lane for several years before moving to Eastbury Road and then Eastland Avenue.  Paddy died on 18th September 2001 aged 81. Irene died on 20th November 2009.

Peggy – married twice, firstly to William Barnett whom she married in October 1946.  William came from Newcastle and he was serving as a Gunner in the Royal Artillery at the time of their marriage.  William and Peggy settled to live in County Durham.  Her second marriage was to William Corben with whom she lived in Colesbourne, near Cheltenham.  They had no children.

Desmond – married Sheila Bibby in Oxfordshire in 1959.  Sheila came from Oxford, but was of Romany origin.  They lived in Northampton.  They had no children and are now both dead.

Jean – married Jack Beaumont at Thornbury Baptist Church in 1948.  They settled in Sandy in Bedfordshire and had two children: David and Janet.  The photograph on the right appeared in the Gazette of July 31st 1948 of the wedding of Jean and Jack Beaumont.  Mrs Irene Cousins and Mrs Peggy Barnett (the newspaper says Barnecott), the bride’s sisters, were matrons of honour.  The report of the wedding says the couple went to live at 19, The Baulk, Biggleswade, Bedfordshire.