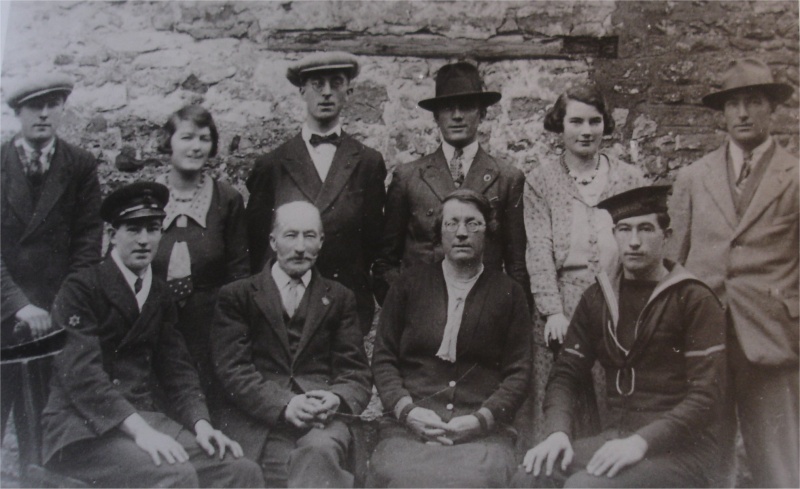 William Holpin and his wife Celia Alice nee Smith were both born in Tytherington.  William was born on 25th June 1869.  The 1871 Census shows that he lived at Baden Hill near Thornbury and that he was the son of Henry Holpin, an agricultural labourer, and his wife Emma.  By 1891 the Census shows that he was lodging in Tytherington and working in the quarry.

We are grateful to Denise Cousins for sending us a copy of the war record of William Holpin dating back to when he enlisted on 16th June 1892 at Woolwich.  We understand that he had earlier enlisted at Glamorgan Artillery.  At the time he enlisted his record said that he was 22 years and 11 months old and five feet three and one half inches tall with brown hair and brown eyes.  When he enlisted into the Royal Artillery he gave his next of kin as his father Henry Holpin.  He was initially a driver.  He received the India Medal of 1895.  He was posted to the North West Frontier in India from 1897 to 1898 and to South Africa in 1899.  He was appointed acting bombadier in 1898.  His record says that he was back in Britain from January 1898 to December 1899 and presumably this is why he married in 1899.  He was promoted to Bombadier in 1900.  He was involved in the Relief of Kimberley in 1900 and one of his medals was for this campaign.  We are also grateful that Denise Cousins let us see William’s diary describing six months of his life whilst in South Africa.  Although the notes do not include references to William’s own activities nor any personal observations about the war or the country, they enable us to get a good picture of the dangers, hardships and distances covered by the solders during such a short period of time.  Click here to read a transcript of his diary

William married Celia Alice Smith on 14th August 1899 at Tytherington Church.  ‘Alice’ was born on 20th September 1867, the daughter of John Smith, a labourer and his wife, Jane.

William was away at the time of the 1901 Census – he was in South Africa fighting in the Boer War.  Celia Alice was at home in Tytherington with sons, Arthur and William.  She appears to have had another son, Elijah Arthur, born in 1898 before she married William Holpin.  We don’t know where Elijah was at the time of the 1901 census, but he died aged 5 and was buried in Thornbury Cemetery on 1st January 1904.  ‘Mrs Holpin of Milbury Heath’ is shown as his mother in the burial register.  William was discharged from the army in June 1904 and the records shows he seemed to have survived the War without having any wounds.

By the time of the 1911 Census the family lived at Grovesend.  William was 41 years old and working in the quarry.  He had been married to Celia for 11 years and they had six children.  William junior was ten years old and born in Tytherington.  George was eight years old and born in Cardiff.  Arthur aged six and Rose Hilda aged four were both born in Buckover near Thornbury.  Jack aged two and Percy one year were both born after the family moved from Tytherington to Grovesend.

In the First World War, William was again back in the Army.  His name is included in the Thornbury Roll of Honour and in 1916 he was listed as being at Weymouth when Christmas parcels were sent out to serving soldiers.

Four newspaper articles in 1917 and 1918 highlight the problems Celia Alice was having in bringing up such a large family.  The first article shows that she was in trouble because her son Arthur had been absent from school on 51 occasions during an 11 week period.  She explained that Arthur had been kept home to do the gardening in the absence of his father (who was serving in the Army) and to work in the hayfield.  A fine of five shillings was issued.  Another article dated January 1918 shows Alice was having a similar problem with her son, John, aged nine.  The school inspector said he had seen John pushing a truck of coal and claimed he had persistent irregularity and there had a lot of trouble with other members of the family.  He acknowledged that the father was in the Army and the mother had ten children at home, two over school age.  Alice was fined 1s 6d with a caution that the fine would be heavier next time.  The third article records that her sons, William and George, were fined £2 each by the Children’s Court for playing ‘pitch and toss’.  The article suggests that some leniency may have been shown by the Court, but we cannot read this section of the article to see what form this leniency may have taken.  The fourth article shows that Celia and her sister were living in a two bedroom house in Grovesend with eight children aged 3 – 16 years.  A court order was issued allowing Celia to live with just seven children or six if her husband was living there as well.  We don’t know what happened as a result of this order, but the 1918 electoral register lists William Holpin as living at Crossways and they continued living there until at least 1927.

The records of the Council School also show how difficult it must have been for Celia.  The log book includes a reference on 23rd December 1914 “Arthur Holpin was sent to desk with book for bad writing but he ran home . He was brought back and refused to apologise . He was punished by receiving three strokes across his back and made to apologise.  The child was not punished for bad writing”.  Then again on 3rd June 1915 “A Holpin came to school this morning in a filthy condition.  Ears, neck, hands and arms were very dirty.  The boy was given soap and water and made to wash himself thoroughly.  At playtime he ran home.  The boys are very irregular attenders and the mother appears to back them up in their bad conduct”.

The 1931 electoral register lists Celia as living in Chapel Street and William as living in Sawmill Lane (where his son, William junior and his wife lived).  The 1935 Electoral Register shows the two of them living at the Exchange Rooms, which we understand to be the buildings on St Mary Street near the junction of Chapel Street which were then part of the Exchange pub on the High Street.

By 1938 they had moved into one of the new council houses, then known as 15 Market Site.  The special register compiled in 1939 in preparation for the war shows William and Alice living there with Frank and Grace.  There is one other person whose name is blacked out.  Frank was a builder’s labourer and Grace was an assistant in a grocery shop.

William died at Market Site on 8th November 1945.  His obituary appeared in the Gazette of 17th November 1945.  The article referred to his service in the Boer War and in the Great War and said that he was a member of the British Legion and was a standard bearer for his branch.  The funeral service was held in Thornbury St Marys Church, but there was a separate memorial service held on the following Sunday at St Pauls, the Hackett.  William was buried in the Thornbury Cemetery on 8th November 1945.  The burial record shows he was a labourer aged 76.  Celia Alice died on 9th April 1951 aged 73.

They had eight children:

See also our album of photographs of the Holpin family