of The Coach House Francis Hopkins was born on 5th December 1913.  He was the son of Thomas George Hopkins and his wife Elizabeth Annie (nee Jenkins).  At the time of Francis’s birth, the family were living at 7 Gloucester Road, but they must have moved away soon afterwards.

When Francis and his siblings, Florence and Frederick, attended the Council School from 1917 onwards, their guardian was Phillips Maggs, initially of Bath Road, but from 1918 from Crossways.  We discovered that their father, Thomas George died on 10th December 1915 in an accident at the Swan in which he was kicked by a horse.  Their mother, Elizabeth Annie re-married in 1917 to Philip Maggs who was himself recently widowed.  Read about Thomas George Hopkins

Francis married Gwendoline Daniels on 17th May 1937 in Tytherington.  She was born in Tytherington on 13th August 1913, the daughter of Hector John Daniels and his wife Annis (nee Bennett).

Their daughter Patricia was born on 7th April 1938.

The special register compiled in 1939 in preparation for the war shows that Gwendoline’s mother and grandmother were living the family at 18 High Street.  Amanda Bennett was born on 8th May 1854 and Annis Daniels was born on 23rd May 1887. 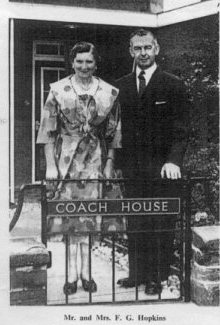 The Gazette of 3rd February 1945 reported that Francis Hopkins had returned to England after his service with the Gloucestershire Regiment during World War II.  Francis was on a long leave having been wounded at Villers Bochage the previous summer.  This battle took place in June 1944 when the Gloucesters, having survived D Day were then used in the drive on Caen over very difficult terrain.  The Battle of Villers Bochage features in another website Click here.

Francis became a very successful businessman in Thornbury operating a grocer’s shop at 18 High Street and a mobile shop service covering a wide area around Thornbury and the district.  Whilst Francis was still working, he produced a little souvenir booklet celebrating the silver jubilee of his business.  Thornbury Museum is fortunate in having a copy of this document which summarises Francis’s life up until 1958.  Read Francis Hopkins autobiography

In 1955 Francis acquired the house and outbuildings at 1 Bath Road, previously occupied for many years by the Baylis family who had operated a carrier service from the property.  Francis needed more accommodation for his extensive stock and adjacent to the house he built a garage for the mobile shops and it was fitted to carry all the delivery goods and dry and canned goods.  The house was given the name of The Coach House to reflect the business carried on by the Baylis family.

On October 8th, 1957, Francis George and Gwendoline (the daughter of Hector Daniels from Tytherington) and their daughter, Pat, moved from the shop to their new home.  They continued to live here until about 1967 when the house was required for demolition to make way for the creation of Rock Street car park.  They then moved to live in Easton Hill Road.

Francis was also an extremely popular person in the area and was very active in community affairs, becoming Chairman of the Parish Council from 1959 – 1964.  We are told that St Mary’s Church in Thornbury was overflowing with people when he died on 10th March 1988 aged 75.  He was buried in Thornbury Cemetery with his daughter, Pat, who had died aged 38 on 12th December 1981.
Read more about 1 Bath Road, the Coach House