Herbert Charles Hume-Spry and his family

The 1910 Rate Book shows that The Priory at 17 Castle Street was occupied by H C Hume-Spry as tenant. Herbert Charles Hume-Spry was born 15th December 1853 in Allahabad and baptised there on 23rd February 1854 .  He was the son of the Rev Arthur Browne Spry and his wife Matilda (nee Browne) and he was then called Herbert Charles Hume Spry without a hyphen.  We have been told by Peter Hume-Spry (a great grand nephew of Herbert who kindly provided the photographs of the family shown here) that Herbert was baptised by his own father.  We understand from the same source that Herbert had an adventurous start to life.  It seems that in 1857 at the outbreak of what the British refer to as the Indian Mutiny Arthur and Matilda were in the fort of Allahabad with their young family.  The family story is that they were forced to seek sanctuary there during the massacres.  However it seems that Arthur was already chaplain there and several records, including the births of their three sons and the burial of the youngest on 4th August  1857, confirm this.  The British Library also has a collection of thirteen letters sent between 1841 and 1867 to their relatives in Norfolk, several of which were actually written from Allahabad.   However sadly we have not yet had an opportunity to see these letters.  It may have been that their home, although in Allahabad, was outside the fort itself  where they were at some time forced to shelter for their own safety.   However, whatever the exact details of the story the fort was under siege for some twelve days and the family must have been distressingly aware of the atrocities  that occurred around that time, not least those committed by the British forces in retaliation. We know that the family sailed to England on the ‘Alfred’ in 1859.  Sadly on March 17th 1959 Matilda Browne Spry died and she was buried at sea the next day.  At that time Herbert was only six years old and his sister, also called Matilda, was aged seven years.  We understand that there is a memorial to Matilda Browne Spry in the Holy Trinity church in Allahabad.  Arthur Browne Spry did not return to England permanently at this point and he did not resign as chaplain until October 1867.

However it seems that as was often the custom at that time, the children spent much of their time in England during their education.  The 1861 census shows Herbert at school in Hornsey in Essex with his sister Matilda. The Census confirms that Herbert was born in Allahabad and says that his sister Matilda was born in “Missourie”.  We believe the latter is a reference to Mussourie Hill Station in Umballah in India.

By 1868 Arthur Browne Spry became Vicar of Stanford in Norfolk and he remained there until his death in 1870.

We understand that Herbert was educated at Marlborough and that from 1874 to 1875 he worked in the Uncovenanted Civil Service in Bengal before becoming an indigo planter for Doolie Indigo Concern at Mozuffarpur, Tirhut by 1877.  Throughout his career Herbert appears to have been a volunteer soldier.  In 1897, when he was a major in the Volunteer Behar Light Horse, he received a long service medal for volunteering for 38 years and 10 days.  His actual occupation was a manager or proprietor of various companies.  Peter Hume-Spry has told us that Herbert was connected to the Dhokraha Concern in Majoulia and by 1907 he appeared in a trade directory as the proprietor of the Behar Iron Works.

Herbert and Angela married Angela Caroline Manners in Thurma, Bengal on January 1st 1883.  Angela was Born in 1863 and was the daughter of Colonel Herbert Russell Manners.

In March 1900 Herbert announced in The Times that his name was now Herbert Charles Hume-Spry with the hyphen.

In the 1901 census Angela Hume-Spry was boarding in Tennyson Road Harpenden with her daughters, Iered aged 6 and Doris aged 17.  We do not know whether this was a visit to England or whether Mrs Hume-Spry returned to England before her husband.  The Special Drainage Rate Book for Thornbury for the year 1910 was amended to show that the tenant was now H C Hume-Spry which may indicate that he moved to Thornbury about that time.  It seems likely that he returned to England before this time as in 1908 he was at his daughter’s wedding near Frome.  We have a thumbnail image of the wedding photograph on the right that shows Herbert and Angela with their daughters Angela Doris (the bride) and Iered Rodney Manners (a bridesmaid).   Please click on the image for a larger photograph. The 1911 census shows that the house was generally called The Priory by this time and that it was occupied by Herbert Charles Hume-Spry aged 57 and a retired tea planter who was born in Allahabad in India.  He and his wife Angela Caroline (nee Angela Caroline Russell Manners) had been married for 28 years and had three children, all still living.

Only one of their children, Iered Rodney Hume Spry their 16 year old daughter lived with them at the time of the 1911 census.  Iered was born in Hutton in Somerset in 1895 and her birth was registered in Axbridge.  The family had two servants; Dorothy Herridge aged 17, a house parlour maid, and Kate Seviour aged 19, a cook. The South Gloucestershire Chronicle of 8th January 1915 shows that Major Hume-Spry was in charge of the Thornbury and District National Reserves.  In 1916 the Prewetts Directory shows that Herbert had continued his interest in volunteering and was the Hon Secretary and Treasurer of the Boys Scouts in Thornbury and District.  It seems likely that the postcard held in Thornbury Museum with a photograph of a parade in Thornbury showing the Scouts marching past the bank in Thornbury High Street in the early Twentieth Century shows Herbert marching with the boys. We have a thumbnail image here below.  Please click on it for a larger photograph.

From 25th February 1917 he served in the Second Volunteer Brigade of the Gloucestershire Regiment as temporary second lieutenant.  We have a thumbnail image of a photograph taken about this time below on the left.  Please click on it for a larger image.

He died aged 73 on 17th June 1927.  We have been told that a newspaper cutting written into the history of the Spry family by James Hume Spry says

” On Sunday the second annual RAOB Church Parade was held at Thornbury.  The service was conducted by the Vicar (Rev. C.R. Cotter. MA.) who based his address on the text “I am among you as one that serveth“. 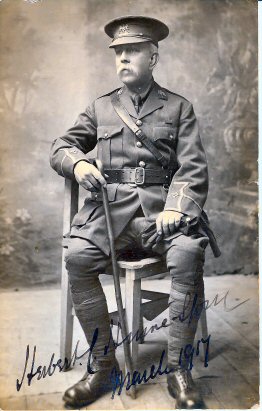 e passing of the late Mr Hume-Spry, he said that they had

“laid to rest a few hours ago the greatest servant to his fellow men of anyone in the town.  Unostentatious, simple, and natural, he was never officious but always efficient.  The Boy Scouts had lost a father so noble in himself and to others, and they could profit by his splendid example, and always and always be ready to render some measure of service to others.  The special RAOB service was used with Mrs E. Pitman at the organ, and the band played Handel’s “Largo”. (Mr Hume-Spry’s favourite tune.)“

He was interred in Thornbury Cemetery on 19th June 1927.

Probate of his estate was granted to his widow, Angela Caroline, and to his daughter, the then Angela Doris Manners Barry.  Effects were valued at £8620 9s 2d.

The rest of the family seem to have left Thornbury soon after this time.  We feel that the entry in the 1931 Kelly’s Trade Directory for H C Hume-Spry may be an error.  It seems more likely that Georgina Isabel Jenkinson bought the house in 1927 as her mother died in the same year that Herbert died.

The widowed Angela Caroline Hume-Spry died in a nursing home in   Ealing, London on 16th December 1947.  Her homes were described as 47 Bramham Gardens Earls Court in London and Twynax House Ford Lane Farnham in Surrey.  The executors of her will were the Westminster Bank and her daughter, Iered Rodney Manners Hume-Spry a spinster.  Angela was buried in Thornbury Cemetery with her husband on 17th December 1947.

Children of Hubert and Angela Spry

Herbert Manners Hume-Spry.  In the 1901 census Herbert Manners Hume-Spry the only son of Herbert and Angela was a boarder at Marlborough.  He was born in India.  Herbert was married in Thornbury in 1926.  In the announcement of the wedding his address was described as Panitola Tea Estate, Assam.  Herbert married Grace Constance Clough in Thornbury in 1926.  She was the daughter of Colonel A H B Clough of Lisburne, Sandecotes Road, Parkstone in Dorset.  Grace died in 1943 and Herbert died in 1944, both in Surrey.  Herbert died at Guilford County Hospital but The Times gave his home address as Twynax House Farnham in Surrey.  They were buried at Pirbright Church.

Angela Doris Manners Hume-Spry married Sir Claude Francis Barry the 3rd Baronet.  She seems mainly to have been referred to as Doris, perhaps to distinguish her from her mother.  Their marriage was registered in Bristol in the September quarter of 1907 and again in Frome in 1908.  It seems likely that the first wedding was a quiet wedding, possibly a Register Office, and this was followed by a larger wedding attended by family members in Frome.  They had two sons and two daughters.  They divorced in 1927.  When her brother died in 1944, Angela was described as Doris Harrison of Cowshot Manor in Pirbright.  Angela died in June 1960.

The website for Cornish Artists has an interesting obituary for Angela Doris Hume-Spry;

“1884—1960
Fellow students Doris HUME-SPRY and Claude Francis BARRY met at art school in Bournemouth and they married, against parental wishes (on his part), in 1908.  Doris, a descendant of the Dukes of Rutland (though one without fortune) had been born in Bengal in 1884 (IGI), the daughter of Charles Hume-Spry.  She was both a competent painter and an excellent art-needleworker.

The couple had three children, two daughters and one son.  Mrs Barry served on the Ladies Committee at STIAC in 1911, and began to show her needlework pictures In December of 1913.  The couple also exhibited at Show Days, sharing a studio for the purposes of exhibition until 1921.  From that point, we lose sight of Doris Barry, at least in that name.  Her husband left St Ives in 1922 (though he was to return later in the 1940s) to pursue his etching career in France and Italy.  Their marriage was dissolved in 1927.”

Iered Rodney Manners Hume-Spry.  Iered was born in Hutton in Somerset in 1895 and her birth was registered in Axbridge.  We have been told by Peter Hume-Spry that Iered died in a nursing home near Battle in Sussex in 1981.