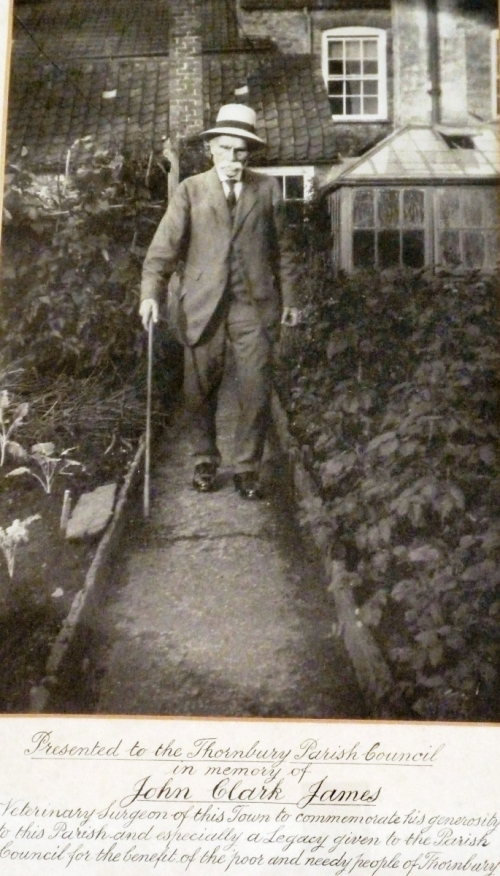 The advertisement shown here below on the right is one that appeared in a local newspaper on February 24th 1883.  The purchaser, John James owned and lived in the Lion House in Thornbury for over 50 years and gave it its present name, The Lion House.  According to Frederick Henry Burchell in his description of Thornbury in the closing years of the 19th century, John James had the old Black Lion demolished and a new house built on the site. (see H.W. Phillips, “Thornbury, Pages from the Past” p.12).

When it was bought by John C James the house had

“two front parlours, bar large smoking room, kitchen, back kitchen, cellar and five bedrooms also a large cistern with pump with a substantial adjoining building which could be converted into a dwelling or workshop. Coach house, four stall stable, fowl house, piggery with a most productive garden.”

It is difficult to say how many changes John James actually made to the property as this description is still recognisable to those who know the house today.

John Clark James was the son of John and Maria James.  In the 1861 census the family lived in Almondsbury.  John James senior was a “cattle doctor” and young John was 12 years old.

John James senior died in the March quarter of 1869 and by the Census of 1871 his son John Clark James was already a vet living with his widowed mother at Milbury Heath.

In 1877 the Trade Directories show that he was still living in Milbury Heath.  On 26th April 1878 there was an announcement in the newspaper that John Clark James, veterinary surgeon of Milbury Heath, was now moving to Thornbury.  The Rate Book of 1878 shows that he was living in what is now Clematis Cottage.

In the December quarter of 1880 John Clark James married Elizabeth Ann Young from Alveston.  The 1881 Census shows that John Clark James and his new wife lived at what is now Clematis Cottage.  By the Trade Directories of 1885 he was described as a veterinary surgeon in Castle Street, presumably at the “Lion House”.

A newspaper of 15th October 1888 reported an accident between John Clark James and a dentist, Frank Hayman.
Mr Hayman claimed that John James had been driving his trap negligently.  He said he and his friends were in a 50 mile cycle race which began and ended in Filton.  He and two other gentlemen were riding safety bicycles and another couple were riding a tandem tricycle.  According to Mr Hayman, the cyclists were riding in single file and Mr James’s driving forced the tricycle on to the grass verge and the trap then pulled further over and caught the handlebar of the cycle.  The cyclist was thrown to the ground.  Mr James had got down from the trap and was very angry and blamed the cyclists.  The other cyclists gave a similar story whereas Mrs James supported her husband’s story that the cyclists were at fault.  The jury at Thornbury County court seemed to find it hard to come to a decision but after asking the judge some questions eventually found in favour of the local man, Mr James.  The judge gave the verdict in favour of Mr James and awarded costs.  The legal representative for the cyclists applied for a new trial as the decision went against the weight of the evidence.  The judge said that the jury had not arrived at the decision that he himself would have but that in no way reflected on the jury.

The 1891 Census shows that John C James was still living in Castle Street and now aged 41 and a veterinary surgeon from Almondsbury.  He was living with his wife Elizabeth aged 30 from Alveston.  They had a 22 year old servant called Flora Horsman.

The 1901 Census shows them still in Castle Street and they appeared to remain there together for the rest of their married life.

John Clark James was aged 62 by the 1911 Census but he was still working as a vet.  His wife Elizabeth, to whom he had been married for 30 years was 57 years old.  They had a servant Alice Ashcroft.

We believe that for a short time between 1916 and 1920  the James’s may have shared their house with another vet, William Richardson Watson.  The 1915 and 1916 Prewett’s Directory William was living in Castle Street.    In 1918 William wrote a letter applying for exemption from service in World War I.  At that time his letter head said “Lion House” in Castle Street.

John Clark James died January 1st 1936 aged 87 years.  His wife Elizabeth died in a nursing home on April 29th 1938 aged 78 years and she was buried with him in Thornbury Cemetery.

In 1936 after the death of John James the house was sold to Mrs Annie Pearce.  Click on the image on the left to see a description of the house at this time.  It is obvious that some changes have taken place in the arrange

ment of the ground floor rooms but it is still not clear to what extent the house was “rebuilt.”  Electricity has certainly been installed.

The Gazette in 1936 lists the extensive number and range of charities to which John Clark James left his estate of £18,054.00.  The couple had no children and so small bequests were left to nephews, nieces and others but the bulk of the estate was left to the Veterinary Benevolent Fund, Muller’s Orphanage, Bristol Eye Hospital, YMCA, St Dunstans, Tower Hamlets Mission and many other charities.  He also left £300 to the Parish Council of Thornbury for a John James Charity, the income of which was to be used for buying blankets or coal for the poor.  Interestingly he also left money to the Non-Conformist Churches – £300 each to Congregational Chapel, the Wesley Chapel and the Baptist Church.  The residue of his estate went to the Salvation Army.