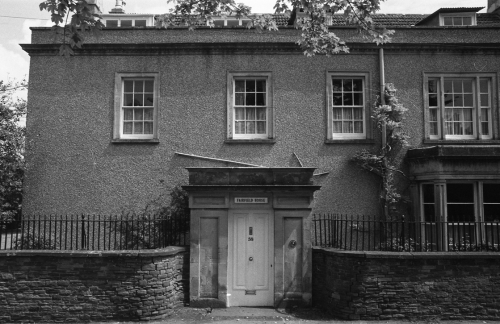 Susannah and Henry Jenner.  In 1788 Edward Mathew left the house which is now known as Fairfield House in Castle Street Thornbury to his great niece Susannah Pearce of Middle Mill, Berkeley.  “Middle Mill” is actually a hamlet between Stone (which is now on the A38 a little to the north of Thornbury) and Michaelwood (which is now near the M5 motorway).  It seems very likely that Susanna never actually lived at Fairfield House.

The biography “Edward Jenner 1749 – 1823” by Richard Fisher says that Susannah Pearce’s father was Thomas Pearce, a lawyer and that her dowry was £1,300.  This book gives as its source The Gloucester Journal of 17th December 1792 for the name of the father of Susannah and the papers of Rev Henry Jenner and Henry Jenner MD for the details of the dowry.

However we believe that Susannah Pearce was the daughter of John Morse Pearce and his wife Elizabeth (nee Bell).  We know that Elizabeth Bell was the niece of Edward Mathew because she was the daughter of Edward’s sister Mary by Mary’s husband John Bell.  According to the Scribe’s Alcove website Susannah Pearce of “Ye Middle Mills” was baptised on 22nd December 1766 at Berkeley to John Morse Pearce and Elizabeth.  The indentures relating to the sale of the property now known as Fairfield also say that Susannah was of Middle Mills.  If we have correctly identified Susannah Pearce, she had at least three sisters; Sarah Pearce who was baptised on 28th November 1759 at Berkeley when the family’s residence was said to be Wick, Edith Pearce who was baptised on 16th August 1769 and who died as an infant, and Ann who died in 1845 aged aged 77, never having married.  We also know from the will of Elizabeth Taylor nee Pearce who died in 1809 that she had niece called Susannah Jenner and a nephew and niece called John and Elizabeth Spier and she had a brother Edward Pearce.   At the wedding of Elizabeth Pearce the two witnesses Susannah Pearce and Ann Pearce. With this information we feel that Ann Pearce, Edward Pearce, Susannah Jenner nee Pearce, Mary Spier nee Pearce and Elizabeth Taylor nee Pearce were all children of John Morse Pearce.

On the 12th May 1791 Susannah Pearce of Middle Mill sold the house and its garden on the south which was 40 feet by 40 feet, together with the stables and outbuildings to Arthur Taylor a tanner for £350.

Susannah Pearce married Henry Jenner on 13th December 1792 at Stone.  A book called “Edward Jenner the Cheltenham years 1795 – 1822” described Susannah Pearce as a “learned young woman.”  It would be nice to know the reason for this description of her.  We know very little of Susannah and much more about her husband Henry.

The previously mentioned book about Edward Jenner implies that Henry was not always an asset and says “by his uncle’s own definition the young man developed into a kind of absent minded genius whose social commonsense did not always keep up with his keen medical intellect.”

The  excellent Edward Jenner Museum in Berkeley has a description of young Henry in a letter Edward Jenner wrote in 1789 that is rather dismissive; “his general appearance and manner is so very Fifteenish that a poor mortal on the bed of sickness will hardly look up to him with that eye of hope that might safely be placed in him.” 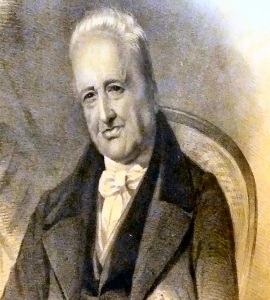 The Edward Jenner Museum  has a portrait of Henry Jenner, a photograph of which they have very kindly allowed us to show here.  It shows Henry Jenner in later life, not looking at all “fifteenish” but with a rather reassuring expression, indicating an excellent bedside bedside manner.

As far as we know Henry and Susannah Jenner lived in what is now the Chantry in Berkeley with Edward Jenner.

We have an account of a murder enquiry that Henry and Edward became involved in in April 1796 which both indicates that Henry was living in Berkeley rather than Thornbury and also shows how interesting life can be in rural Gloucestershire.

On April 17th 1794 a messenger came to the Jenner cottage in Berkeley.  Henry was on duty and attended the house of Mrs Sarah Pegler in Swanley on the Bristol Road where a gentleman by the name of Captain William Reed was lodging with his attractive younger wife, her brother James Watkins, and a young man called Robert Edge.  Mr Reed was very ill indeed and he was in great pain from his abdomen.  He was also bleeding heavily from a scalp wound.  The story was that they were on their way from Poole to Wales when Mr Reed was taken ill and they were forced to take lodging and rest.

The later trial brought out a more interesting tale.  William Reed had had bouts of severe sickness (brought on most probably by arsenic poisoning) and after one of them he had been induced to make a will leaving the very large sum of £6,500 to his wife in trust for her children.  Mrs Reed was anxious to marry another man called Robert Edgar.  Poisoning having failed, Mrs Reed offered her brother, James £200 to finish Mr Reed off in a less subtle way, but not in Poole where the family was well known.  They decided to travel in the hopes that a sudden death would be less suspicious. On their arrival in Swanley, Mrs Reed again made arsenic laced soup for her husband.  Again the attempt failed and James Watkins went upstairs and hit his brother in law with a stick.  On the second day although more soup and more beating failed to kill him off, William Reed was very ill.  The householder became concerned and Henry Jenner was summoned.  After Henry’s first visit, James Watkins again tried to beat the sick man to death.  William Reed then died of the delayed results of poisoning.

Henry Jenner, concerned for his patient’s safety and unhappy with the story told him, returned the next day to find that his patient had died.  Henry then fed some of the sick man’s vomit to a dog that lived at the cottage.  The dog quickly died.  Mrs Reed and her brother fled but their young friend stayed and told what he knew to the authorities.  Edward Jenner, Henry’s uncle then took over and tested the stomach contents finding mercury or arsenic poisoning.  Not trusting the results, he tested the stomach contents on another poor canine that also died.  Charles Brandon Tyre also investigated and the three men decided that the man had died from arsenic and not the extensive head injuries.  A charge of murder was brought against Mrs. Reed and her brother.  The brother escaped to Bishop’s Frome in Herefordshire where he shot himself.  Mrs Reed was arrested by the Bow Street Runners Mrs. Mary Reed, was charged with poisoning her husband, at Berkeley, in Gloucestershire, in April, 1794.  She was accused of ‘not having the fear of God before her eyes, but being moved and seduced by the instigation of the devil, and of her malice aforethought contriving and intending the said William Reed, her late husband, in his life time to deprive of his life, and him feloniously and traitorously to poison, kill, and murder’.  Her trial before Mr. Justice Lawrence began at Gloucester Assizes, on 28th March 1796 and lasted 17 hours.  It is noteworthy that she was charged with ‘petit treason’.  This was in fact the offence of murder, but because Mary was accused of forfeiting her duty to her husband and breaking her allegiance to him, the charge was given this title.  She could still have been condemned for ‘simple murder’ if the jury did not feel she was guilty of petit treason.  Surprisingly she was found not guilty.

In 1795 Henry Jenner and his brother George took over the practice from Edward Jenner.  In that year they inoculated 309 people in Berkeley with smallpox and all recovered.  This naturally caused problems as Edward Jenner was the advocate of the new vaccination using the cowpox vaccine.

Henry remained in Berkeley where their son Stephen Jenner was baptised on 22nd April 1796.

The book called “Edward Jenner the Cheltenham years 1795 – 1822″ says that Edward Jenner became dangerously ill with typhus in the summer of 1794 and that his nephew’s wife Susannah and young child also contracted typhus and a maid died.  Susannah and her young daughter, Maria died in the summer of 1798 from what must have been a later epidemic.  Maria died and was buried on 20th June 1798.  Susannah the wife of Henry Jenner died on 7th August 1798.  Both were buried at Berkeley.

The following year Henry was elected mayor of Berkeley.

We also know that by 1799 Henry Jenner was fully committed to vaccination with the cowpox vaccine and in this year he published a pamphlet .” An Address to the Public on the advantage of Vaccine Inoculation with the Objections to it Refuted.”  Henry was past 30 by this time and his pamphlet was taken seriously and it was printed in the medical and physical journal and also translated into German.

Henry Jenner was a Freemason and was very influential in this area as well as in his professional life.  He was a Provincial Grand Master for Bristol from 1798 to June 1807 and at one period was Provincial Grand Superintendant for Bristol and Gloucestershire.  He was the first Worshipful Master of the Lodge of Faith and Friendship number 449 which was constituted at Berkeley on 4th November 1802.

By 1801 he had become concerned about the apathy towards vaccination shown in Bristol and he addressed another tract to the inhabitants of Bristol.  He established the Bristol Vaccine Institute for the Vaccination of the Poor and appealed for contributions.

In 1802 he was listed as a Fellow of the Linnean Society.

It was unfortunate therefore that Henry was involved in a scandal at this time in his life when he seemed most successful and respected.  We are indebted to the Edward Jenner Museum  for the information on this story.  Henry had a lady called Charlotte Fryer, previously Cross, living with him and in 1802 he went through a form of marriage in the Bath area with this lady, although he signed his name Henry Hedgenar.  They lived together in Bristol for three years and Charlotte had a son, William.  The relationship broke down and Henry returned to Berkeley.  Charlotte eventually sued Henry for restitution of conjugal rights to which Henry’s response was that they had never been legally married.  Charlotte died aged 35 on 23rd December 1816 before the case was settled.

The case seems to have caused adverse reaction in the family as around this time Stephen, Susannah and Henry’s son went to live with Edward Jenner his uncle, who seems to have become a guardian even though the young man’s father was still alive.

Henry Jenner was buried in the churchyard in Stone on July 12th 1851 aged 83.

There remained three children; Stephen, Susanna and Caroline.  Susanna and Caroline, the twins, were born in 1797 and once the twins attained the age of 21 the three young people were able to sell the property which had previously been held in trust for them.  Thus it was in 1818 that an indenture of that year between Susanna, Caroline and Stephen Jenner sold Fairfield House and its grounds to William Henry Robinson of Mary le Bon in Middlesex the son of the then tenant Susanna Robinson.

see the other owners of this house