William Knapp, the elder
William Knapp was born on 29th October 1761 and baptised on 27th November 1761.  He was the son of James Knapp, a blacksmith and his wife, Elizabeth (nee Hobby).  James and Elizabeth lived in Thornbury and had at least seven children.  Only two of these children were sons, but both of them, James and William became blacksmiths like their father.  On this page we have focused on William and his family.  Read more about the ther son James Knapp

On 26th February 1786, William married Flora Child, the daughter of Thomas Child and his wife, Anne.  They appeared to have lived in the old house since demolished to make space for the erection of the Methodist Church on the High Street.  Click here to read about this property  On 24th January 1805 William agreed to pay William Osborne £240 for the property which had previously been occupied by his father, James Knapp.  We think that James had died in 1785 so this means that William had been occupying the house for over 20 years by the time he bought it.

William Knapp produced the metal parts of the Thornbury stocks for which he was paid one pound four shillings and two pence in 1807.  He also made locks.

The records of the Methodist Church show that William raised £300 by yielding the tenancy of the land in 1811 and in 1817 he raised a further £100 with the property as surety.  Eventually he transferred the property and the debt to Daniel Pitcher.  The 1840 Tithe Survey shows that this property was still owned by Daniel Pitcher (who was presumably Elizabeth’s brother) and occupied by Elizabeth Knapp.  William had died aged 59 in 1821 and was buried on 22nd August 1821.

Elizabeth carried on living in the same house and took over the blacksmith’s business from her dead husband.  On 22nd December 1834 she appeared at the Thornbury Petty Sessional Court charged with possessing four defective weights in her shop.  In the 1841 census she is listed there as a blacksmith with sons, Daniel and Henry, who were also both blacksmiths.  The 1851 census shows Elizabeth, now an ironmonger living at the same place in the High Street with her son, Henry, a blacksmith.  The 1861 census shows Elizabeth now aged 68 had given up her business and moved to live with her daughter, Phoebe and her husband Thomas Ricketts on the east side of the High Street, two houses down from the Swan Hotel.  She was still living there in 1871 when she was aged 88.  She died later that year – the Scribes Alcove Website says her age was 78, FreeBMD website says it was 91.

William Knapp, the younger – born on 22nd August 1797, the son of William and Flora, William became a blacksmith like his father and grandfather before him.  He settled to live in the house on the corner of Gloucester Road, The Plain and St John Street, which we now know as the Georgian House.  Click here to read more

Daniel Pitcher Knapp – baptised on 10th January 1813, the son of William and Elizabeth, Daniel became a blacksmith, like his father and grandfather.  In 1841 he was living in the High Street (in a house where the Methodist Church now stands) with his mother and brother, Henry who was also a blacksmith.  In December quarter 1843, Daniel married Amelia Allen who was born on 4th June 1809, the daughter of John Allen, a yeoman and his wife, Ann.  Amelia was the sister of Ann Allen who became the wife of Daniel’s brother, Edwin.  Note that John Allen, Amelia’s father, was involved in the ‘Great Berkeley Poaching Affray ‘ of 1816.  John was hanged at Gloucester Gaol on 13th April 1816 for the murder of assistant gamekeeper, William Ingram.

In the 1851 census Daniel, was living near his mother at 2 High Street.  His will dated 9th November 1846 showed that he had recently purchased this property from Nicholas Cornock and Daniel devised it to his wife, Amelia.

In the 1851 census Daniel was listed as a grocer and blacksmith living with his wife, Amelia aged 41 from Morton.  Daniel died in 1856.  The 1861 census shows Amelia was a lodging house keeper at 30 Picton Street, Bristol and the 1871 and 1881 census showed she stayed there.  She died in Bristol on 26th April 1885 aged 76 and she was buried in her parents’ grave in St Mary’s Churchyard in Thornbury.

Phoebe Elizabeth Knapp – baptised on 28th September 1814, the daughter of William and Elizabeth.  Phoebe married Thomas Ricketts, a cooper from Oldbury.  In 1841 they were living in Castle Street a few houses up from The Chantry.  The 1851 Census shows they had moved to the east side of the High Street, two houses down from The Swan Hotel and in 1861 and 1871 they were still living there with Phoebe’s mother as a boarder.  Also living with them in 1861 and 1871 was their niece, Hannah Hodges who was born in Cowbridge about 1850.  Thomas died aged 64 in 1876 and in the 1881 census Phoebe was carrying on with the shop and Hannah Hodges was still living with her.

The 1885 Rate Book shows that Phoebe had become the owner and occupier of 5 Castle Street, a house previously owned by her brother, Henry Knapp who had died in 1882 without issue.  The 1891 census shows she is living there with her niece, Hannah Hodges, now aged 38.  They were both still in the Castle Street house in 1901 census.  Phoebe died in March quarter 1902 aged 87.  Read more about Phoebe Ricketts nee Knapp.

We can’t be sure about Hannah’s parent, although she could be the daughter of John Hodges and Ann Ricketts who married in Bristol in June quarter 1844. 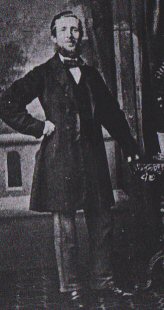 Edwin Knapp – baptised on 28th May 1817, the son of William and Elizabeth.  He is shown in the photo on the right.  Edwin married Ann Allen at Clifton Register Office on 28th May 1839.  Ann was baptised on 2nd October 1816, the daughter of John Allen, a yeoman from Morton and his wife, Ann.  Ann was the sister of Amelia Allen, the wife of Edwin’s brother, Daniel.  Note that John Allen, Ann’s father, was involved in the ‘Great Berkeley Poaching Affray ‘ of 1816.  John was hanged at Gloucester Gaol on 13th April 1816 for his involvement in the poaching affray which led to the murder of assistant gamekeeper, William Ingram.

The 1841 census shows Edwin started as a shoemaker living in the High Street, near the White Lion.  In 1844 Edwin bought the property in St Mary Street which later became known as 13 St Mary Street.  He was living there at the time.  The 1851 census shows they now had six children and had moved to 49 High Street where Edwin was trading as a bootmaker.  He had bought this property in 1850.  In 1856 he sold the property at 13 St Mary Street to his brother, Henry.  By this time, Edwin had moved to live in Old King Street, Bristol.

The 1861 census shows Edwin and Ann were living at 74 Regent Street, St Phillips, Bristol.  Interestingly, Edwin had become an accountant.  We believe that Ann Knapp must have died between the 1861 and 1871 censuses.  Edwin married Mary Ann David in the December quarter of 1869.  The 1871 census shows that he had become a beerhouse keeper in Albermarle Place in Bristol.  His death was registered in the Clifton area of Bristol in September quarter 1871.  He was aged 54.

A newspaper article of 2nd March 1882 reported the marriage of Sarah Knapp the seventh daughter of the late Edwin Knapp of Thornbury to Frank Charles the third son of Robert Buckenham of Charlton in Kent.  The couple were married in Warwick.

Edwin Knapp had 10 children in all, 7 of whom survived to adulthood of whom all but one had issue.

Henry Knapp – baptised on 1st March 1820, the son of William Knapp, a blacksmith and his wife, Elizabeth. Henry became a blacksmith like his father, his grandfather and several of his brothers.

In 1841 census Henry was a blacksmith living with his widowed mother and brother, Daniel, also a blacksmith.  Their house was on the site of where the Methodist Church now stands which the 1840 Tithe Survey shows was then owned by Daniel Pitcher who was presumably the brother of Henry’s mother.

In 1851 Henry was still living with his mother who was now listed as an ironmonger.  Henry was still working as a blacksmith.  In 1853 Henry married Emma Wilkes, the daughter of Henry Wilkes, the clockmaker and his wife, Mary.  Emma inherited several properties from her mother when she died in 1849.  These included the 10 properties in Horseshoe Lane/Rock Street.

On 2nd July 1856 Henry bought 13 St Mary Street from his brother, Edwin.  The value of the property was agreed as being £135.  Henry paid Edwin £45 and took over the existing mortgage of £90 which Edwin had arranged with Hester Olive.  On 8th October 1862 Henry repaid Hester Olive the £90 plus interest.  On 13th April 1859 Henry bought three properties in Mutton Lane (now Crispin Lane) from John Cossham, blacksmith of Thornbury for £150.

The 1861 and 1871 census shows Henry and Emma living in Colwell Street (the shop now called 8 The Plain), next door to the Boars Head (now Royal George).  They seem to be be sharing the house with John Morgan, an independent minister aged 34 and his wife, Martha aged 43, both of whom were born in Frampton on Severn.  Here Henry had his smithy in the premises which later became associated with the Symes family.  The 1876 Rate Book and 1881 census show that Henry had retired and he and Emma had moved to Epworth House at 12 Castle Street.  The property on The Plain was passed by 1876 to Emma’s niece, Mary Ann Ann, who became Mary Ann Wilmot following her marriage to Samuel Mullett Wilmot.

In 1863 Henry was a Trustees of the British School which opened a new school at Gillingstool.

Both Emma and Henry died in 1882.  Emma was aged 64 and Henry aged 62 when he died on 16th December 1882.  They do not seem to have had any children.  The property in Horseshoe Lane/Rock Street which Emma inherited from her father was passed to her niece, Mary Ann Ann.  We know that Henry also became owner of other properties in Thornbury including two other houses in Castle Street which later became known as 5 Castle St and 7 Castle Street.  Although these were put up for auction after Henry’s death, the next owner of number 5 was his niece, Phoebe Elizabeth Ricketts.