Joseph Laver was born around 1774 in Compton in Somerset and he married Louisa Willis from Hockley in Bedfordshire on 8th March 1801 in Westbury on Trym, Bristol.  Louisa was the daughter of Henry Willis and his wife, Jane (nee Lubbock) and sister of Temperance Jane Willis who also had connections with the Town.

Joseph appears to have moved to Thornbury before his marriage.  The 1800 Land Tax record shows Joseph renting a property from Susannah Rolph which we suspect was 9 High Street.  Joseph and Louisa appeared to have settled in Thornbury, presumably following their marriage.  Their daughter, Harriett, was born on 13th March 1808 and baptised at St Marys on 30th April 1808.  They had five more children in the next 12 years: Sophia born on 21st November 1809 and baptised on 20th December 1809, Elizabeth Louisa baptised on 15th March 1815, Jane Alice baptised on 5th March 1817, Charlotte baptised on 12th August 1818 and Maria Louisa baptised on 17th May 1820.  It is interesting that all six baptism records show Joseph was a linen draper, although other sources (see below) indicate that he became the manager (or clerk) of the Thornbury Bank from 1808 onwards.  Perhaps Joseph was able to combine both jobs or it was Louisa who ran the draper’s shop.

Joseph’s brother, George, also moved to Thornbury and married a local girl, Mary Cook in 1809.  The 1809 and 1810 Land Tax records show Joseph was occupying two adjoining properties belonging to Susannah Rolph.  We suspect one of these may have been the Thornbury Bank (at 11 High Street) in which Joseph worked from about 1808.  The other was at 9 High Street.

There is an interesting record of Joseph Laver being fined at the Petty Session Court held at The Swan on 22nd December 1834.  Joseph was described as a tea dealer charged with possessing five defective weights.  He was fined five shillings with eight shillings costs.  We have no other reference to him as a tea dealer.  Joseph’s brother, George, was also charged with a similar offence having four defective weights in his confectionery business.

The Tithe Apportionment Map which was drawn up between 1837 and 1840 shows that Joseph Laver owned three houses.  Two were houses on the High Street (plots 195 and 197) which were next door to the Parslow and Rolph Bank where he worked.  These two houses later became known as 7 and 9 High Street and one of these (number 7) was occupied by Joseph’s brother, George Laver, a pastry cook.  Joseph also owned a house and yard in St Mary Street (plot 196) which later became known as 2 St Mary Street.

We are a little confused as to where Joseph and the family were living around this time.  The 1841 census shows Joseph’s sister-in-law, Temperance Willis was living at 9 High Street.  She was described as being ‘Independent’ aged 74 living with a female servant Ann Jenkins aged 24.  The 1841 census suggests that Joseph and the family were living next door at 11 High Street.  Joseph is described as a clerk at the Bank.  The 1851 census suggests that 9 High Street was occupied by Joseph Laver and his family.

The 1841 Census shows Joseph was a clerk at the Bank and living there with his wife, Louisa and daughter, Maria.  By the 1851 census he was the Bank Manager.  We have some information about Joseph Laver from a Society of Thornbury Folk Bulletin.

“Joseph Laver was Manager for fifty years of the Thornbury Bank (Rolph Parslow and Yates), then carried on in the premises now occupied by the International Stores.  After his death at the age of 84 in 1857, the banking business was taken over by Harwood & Co. eventually absorbed by the National Provincial Bank.

At the Record Office at Gloucester is a letter from Joseph Laver to his daughter, Maria, in London which contains directions for her return home.  Under the date 21st August, 1839, he writes, “Of course, you will come by a day coach and one of the earliest into Bristol in the evening.  As it will be too late to come on to Thornbury that night you will have to seek a bed at the house of a friend in Bristol, which no doubt Charlotte will secure in good time.  Cooper’s Old Company’s Coach is perhaps as good as any; with that there are no fees to Coachman, Guard or waiters on the road”…… “Should you see a modest looking Black Stock you may buy it for me“.

The archives of the Royal Bank of Scotland confirm that the Thornbury Bank was set up by George Rolph in 1808.  The 1841 census shows Joseph Laver as a clerk in the Bank, and the 1851 census show him as Bank Manager there.  The obituary of Joseph Laver in the Bath Chronicle describes him as a “faithful and confidential clerk” to Messrs Rolph Yates and Co for upwards of 50 years.

Joseph Laver’s will made 15th October 1856 appointed his son, Henry Willis Laver, a surgeon of Thornbury and his son in law a surgeon called Frederick John Burge of Hammersmith as trustees.  He gave his daughter, Maria Louisa Laver his current residence, the freehold house called the ‘Bank House’ which we believe to have been at 9 High Street and all his personal property.  Another house at 7 High Street which was in the occupancy of Henry Davis was to be sold by his trustees.  From the profits of the sale of that house he left £20 to his niece, Jane Temperance Brookes, and the rest was to be divided amongst his four children; Henry Willis Laver, Mrs Harriett Burge, Mrs Sophia Lovegrove and Mrs Charlotte Jones.  He then asked to be buried “in a plain manner.”

Frank Henry Laver was born 21st December 1801 and christened at St James’s Church in Bristol.  He died in Jamaica in 1821 according to notes on a a family record found in Gloucester Records Office.  The newspaper report of his brother Fredrick’s death suggests that Frank fell into a sugar cask in Jamaica.

Frederick Laver was born on 16th March 1803 and christened at Christ Church in Bristol.  A newspaper report of 21st July 1823 recorded the death of Frederick:

“Monday evening a Coroner’s Inquest was held on board the ship “Ann” from Jamaica on the body of Mr Frederick Laver son of Mr Laver of the Thornbury Bank who put an end to his existence by discharging a pistol through his head, in the afternoon of that day.  Verdict “shot himself being at the time in a state of mental derangement.”  It appears that this unfortunate young man had only returned a few days from the West Indies and since his arrival had been subject to acute attacks in the head arising from too great a determination of blood to that part.

On Friday he called on a medical gentleman and requested that the temple artery might be opened; his behaviour was such as to lead the gentleman at first to think him in a state of intoxication, but finding this not to be the case, he bled him and administered some active medicine.  No doubt therefore can be entertained but that on recurrence of a more violent attack it overcame his reason and he committed the fatal act as the consequence.

What adds to the distress of his afflicted relatives is that not very long since another brother lost his life by falling into a sugar cask in Jamaica.  The event has excited the strongest sympathy in Thornbury and its neighbourhood.”

Winchcombe Willis Laver was born 1st October 1804 (at 9am!) and christened at Christ Church Bristol.  He died on November 15th 1805.

Ellen must have died in Camberwell in 1852 and Henry married again in the same quarter of 1852.  His second wife was Mary Ketcher Lindemann who he married in the Birmingham area. 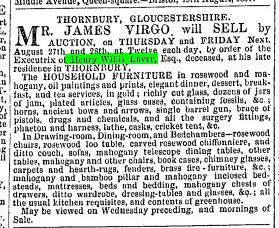 Although he was living in Thornbury at the time, Henry died suddenly at the residence of Captain R Brown RN in Hythe Hampshire on 23rd July 1857.  In his last will he left his estate to his “dear wife Mary Kitcher Laver.”  We suspect that Mary moved away.  On 22nd August 1857 an advertisement appeared in the Bristol newspaper for the sale of Henry Willis Laver’s four bed-roomed residence in the High Street in Thornbury with its greenhouse and productive walled garden.  We are not sure where this house was located.  His property was auctioned at the same time.  This included many items connected with his profession and interests in medicine and science.  See the extract on the right for details.

Harriet Laver was born on 13th March 1808 in the afternoon and baptised on 24th April 1808.  She married a surgeon Frederick John Burge at Charlcombe near Bath in April 1838.

Charlotte Laver was born on 18th July 1818 and baptised on 12th August 1818.  She married James Jones in the Bedminster area on July 21st 1847.  James appears to have been a widower.  The 1841 Census shows that he was a surgeon in the High Street in Thornbury aged about 25 and living with Amelia Jones of the same age.  Read more about Charlotte Jones

Maria Louisa Laver was born on 17th May 1820.  In 1851 Maria was living with her parents in the High Street in Thornbury.  The trade directory says Maria Louisa Laver ran a ladies boarding school in 1877 at Thornbury Cottage on the corner of Kington Lane.  We understand from the Society of Thornbury Folk that she kept a school there for many years.  We have records of her in the Rate Books 1869-1885 which show that she rented a property from Sir K G Key in Kington Lane which appears to be this property.  The advertisement for the sale of the substantial four bed-roomed property in Kington Lane which appeared in the Bristol Mercury dated March 1868 suggests that she was already living there at that time.  From 1890 to 1894 the Rate Books indicate that Maria lived in what became 24 Castle Street  The 1899 Rate Book shows that Maria lived at what is now Bank Cottage (14 Castle Street in Thornbury) which she rented from John Crowther Gwynn.  Maria Louisa died on 6th January 1900 and was buried with her parents.  The report of her sister Charlotte’s death makes mention that Miss Laver (Maria Louisa) was lying dead at the same time that her sister died.