Arthur Conway Lewis and his family 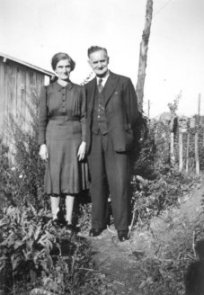 Arthur Conway Lewis and Lily in back garden

Arthur Conway Lewis was born in Bath on 5th May 1892, the son of Albert Lewis and Florence Hodgson (nee Laxon).  Both Albert and Florence had been married before and in the 1901 census they can be found living in Worle, Somerset where Albert is trading as a grocer.  Arthur was not living with them and we don’t know where he was at that time.

Arthur married Lily Poole in Thornbury Baptist Chapel on 16th April 1914.  Lily was born on 30th April 1892, the daughter of Thomas Poole, a road labourer and his wife, Sarah who were living at Grovesend in 1901 census.

During the War Arthur was attested in November 191 and mobilised into the Gloster Regiment in April 1916.  He was described as 5ft 6 and three quarters inches with 34 and a half inch chest.  His record indicates that he qualified as a 1st class signaller in 1917.

The family initially lived in Sibland.  They had five children who all attended the Council School: Norah Joyce born on 12th April 1915, Howard Conway born on 24th February 1917, Arthur Ronald (known as Ron) in 1923, John Poole in 1926, and Michael David on 2nd February 1932.

Arthur was an insurance agent in Sibland whilst living at Sibland.  In 1932 they moved to 11 Pullins Green.  He seems to have tried his hand as a draper in the early 1930’s as there is an Arthur C. Lewis listed as a draper in St John Street in the 1935 directory.  When the property was put up for sale at auction in April 1937 Arthur appears to have bought it.

The special register compiled in 1939 in preparation for the war shows Arthur was then working as a filing clerk in the Bristol Aeroplane Company.  During the war he and daughter, Norah, also acted as ARP Wardens.  Note tat the entries in this register for Howard and John are ‘blacked out’ so we cannot se the details.

Most people however remember Lewis’s as a sweet shop.  One young customer recalls that Lily was ‘stone deaf’ so purchases were difficult to make!

Arthur was involved with both the cricket and football teams and was the superintendent and organist for Thornbury Baptist Church.

Norah Joyce – became a school teacher and during the War acted as ARP Warden.  In 1939 she married Leslie M. Dobbs.

Howard – joined the RAMC in the Second World War.  He was awarded a Certificate of Merit for his courage and good work in organising Casualty Clearing Posts through the War after D Day and especially during an attack on Lang Heide on October 14th 1944.  On the left we show the photograph that accompanied this article.  When he married in 1941 he was a staff sergeant.  The report which appeared in the Gazette says that Howard was ‘a well known Thornbury sportsman and athlete who created several records in athletics while at the Grammar School and later played cricket and football for Town clubs.  Before joining RAMC he was a schoolmaster at Church Street Boys School, Stroud.  His bride was Eileen May Thompson daughter of A E Thompson of High Street.  Eileen (shown below in the photo on the right) was employed on the staff at E and A Robinson.  Her sister, Edna, was living a few yards away and was the wife of George Ord.

John Poole Lewis also attended the Grammar School and was a keen sportsman, playing football and cricket for Thornbury clubs.  After the Grammar School he went on to study at St Pauls College, Cheltenham and at the time of his marriage in 1950 he was hoping to go to Loughborough College to obtain a diploma in physical education.  On August 19th 1950 he married Barbara Taylor, the daughter of Stanley and Dorothy Taylor at St Mary’s church in Thornbury.

We are grateful to Les Summerfield, the Thornbury Cricket Club and Mike Grace for allowing us to use Edgar Mervyn Grace’s notes about the Cricket Club.  These notes include the following little sketches about the Lewis boys:

John graduated from the Grammar School, where he learnt his cricket and became a stalwart of the Club.  A sound bat, he made at least one century and occasionally bowled slow breaks, but he excelled as a safe fielder at cover or extra cover and was equally reliable in the deep.  Vice Captain in 1958, he holds the M.C.C. Certificate for Coaching.

Howard who is John’s eldest brother and at the Grammar School was an all-rounder, played very good club cricket.  A successful schoolmaster, he kept up his cricket after leaving Thornbury, where he was Chairman of the Old Thornburians.  Like his brother, Howard also holds an M.C.C. Coaching Certificate.

Mike, the youngest of the three brothers, bowled a good fast ball with an easy action, and played for the Club for several seasons.

There was a notice in the Gazette advertising the sale of the grocery business on 29th October 1948 when the Lewis’s moved to Court Road, Horfield.  The sale was described as of special interest to grocers and fish fryers.  At this time the premises was said to have “shop, two reception rooms, kitchenette, four bedrooms and all mains services.  Garden at rear with 36ft frontage to good lane.”  The premises were said to be in the occupation of Mr A C Lewis but would be immediately vacated on exchange of contracts.