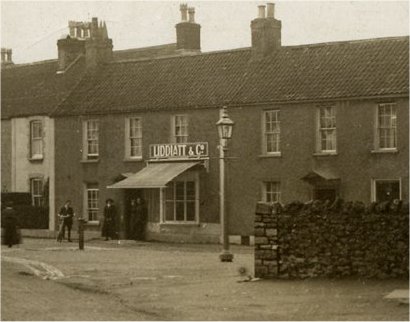 Edward Liddiatt was born in Thornbury in 1856, the son of William Liddiatt and his wife, Margaret (nee Mitchie).  William was a sawyer from Thornbury.  He and Margaret had married and lived in Clifton for a few years which is where Edward was born.  They moved back to live in 13 Castle Street in 1861.  By 1871 William was living in 4 Saw Mill Lane, but Edward was not at home and we have been unable to find him.

The marriage of Edward Liddiatt and Lucy Tucker was registered in Bristol in the first quarter 1880.  Lucy was the daughter of Thomas Tucker, a carpenter who lived in St John Street.

In the 1881 census, Edward and Lucy were living in the house now known as 21 Pullins Green.  Edward was a wood sawyer, aged 25 born in Clifton and Lucy was a dressmaker, also aged 25, from Thornbury.  They had a baby daughter, Mabella just four months old.  Edward was listed as a member of the Thornbury Detachment of the 1st Volunteer Battalion of the Gloucester Regiment in 1886.  He is was still a member in 1888 and 1891.  The unit disbanded in 1895.

Edward appears to have given up wood sawing.  In 1889 he is listed in trade directories as running a fishmongers on The Plain.  The 1891 census shows he had now opened his shop at 11 Pullins Green.  He is listed there in the census as a fishmonger and greengrocer.  He and Lucy have had several children by now; Mabella aged 10, Daisy aged 9, Herbert aged 8, Percy aged 5, Florence aged 2 and William aged 1. 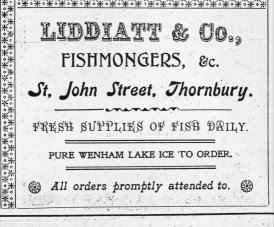 Edward seems to have been heavily involved in the Baptist Church as their records show he acted as chairman in various special meetings.  He died in 1898 aged 43 years and he was buried in the Baptist Burial Ground 1st January 1899.

Edward’s death left Lucy to look after the business for the next 30 years.  In 1901 she was shown in the census as a fishmonger.  Daisy was still at home aged 19, as well as Herbert, a carpenter’s apprentice aged 17, Percy a fishmonger’s assistant aged 15, and Florence aged 12 and William Thomas who was aged 10 and had an unusual occupation described as ‘Local’.

Mabella was born in the December quarter of 1880.  She married Arnold Sutcliffe Whittaker in 1904.  In 1913 the electoral roll showed that Arnold was living in the Horfield District of Bristol.  She died in Clutton in Somerset in 1919.

Daisy was born in the March quarter of 1882.  Daisy married Arnold S Whittaker in Clutton in 1920.

Herbert Edward was born in the June quarter of 1883.  In the 1901 census he was an apprentice carpenter.   Herbert became a carpenter and joiner with the building firm of Tucker Brothers. We understand that Herbert Edward Liddiatt died in New South Wales in 1923.  It seems that he may have fallen down a well.  The Sydney Morning Herald of May 16th 1923 referred to his widow Amy.

Percy was born in the September quarter of 1885.  In the 1901 census he was aged 15 and an assistant fishmonger.    He was mentioned in the list of Christmas presents sent in 1917 to those serving in the forces.  We believe that he served with the Royal Army Medical Corps. Percy was mentioned as member of the Baptist Church Band   Percy seems to have become a seaman and we have a record of his engagement in the navy from 1921 to 1927.  He was described as a hospital attendant.  He married Agnes Moreton in Southampton in 1928.  He was known to be living in Silver Street in the 1940s.  He died in Southampton in the December quarter of 1957.

Florence.  Florence was born in the June quarter of 1888.  In the 1901 census at the age of 12 she was living with her family in Pullins Green.  In May 1932 Florence married Arthur Stanley Cooper at the Mount Pleasant Chapel in Falfield.  Arthur was the son of Mr and Mrs Dan Cooper of Hillesley

William Thomas was born in the December quarter of 1889.