The Lloyds of Thornbury

The children of Edmund and Catherine Lloyd 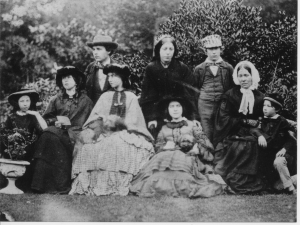 Catherine Elizabeth Lloyd with her family, after the death of her husband Edmund

See also our album of photographs of the Lloyd family.

Most of the others did particularly well for themselves:

Henry Hume Lloyd – baptised on 10th June 1834, the eldest of Edmund and Catherine Elizabeth’s children.  Henry took over the business and carried on living at Fairfield House, Thornbury after his parents died.  Click here to read more

Edward Harford Lloyd –  baptised on 22nd April 1836.  Edward was admitted to the University of London to study medicine.  He graduated as Bachelor of Medicine on 1859.  Edward joined the Army Medical Service as an assistant surgeon June 13th 1859, then as Staff Assistant Surgeon.  In December 1867 he was appointed Vice Assistant Surgeon.  Edward became Surgeon on March 1st 1873, Surgeon Major on January 6th 1875 and Honorary Brigade Surgeon on his retirement on May 20th 1885.  During the Nile Expedition in 1884/5 he had charge of a Field hospital at Kaibar, receiving a medal with clasp and the Khedive’s bronze star.  Edward never married.  When he retired, he settled in Surbiton in Surrey.  In the 1901 Census his widowed sister, Alice was living with him.  Edward died from heart failure on 3rd May 1908 at the Royal Naval Hospital, Chatham.  He was aged 72. Alice Anne Esmeade Lloyd – baptised on 15th January 1840.  Alice married Edward Gorton Penny, a Clerk in Holy Orders in Thornbury on 25th October 1859.  Edward was born in London on 1st September 1824, the son of Charles Penny, a gentleman of Colyton in Devon.  He attended Kings School in London and then went on to Christ’s College, Cambridge.  He obtained his BA at Cambridge and became a deacon in 1847.  He was curate at Alveston in 1847 before moving to Fulbeck in Lincolnshire.  From 1848 to 1850 he was a curate in Thornbury.  He became an MA in 1851.

In the 1861 census Edward and Alice were living in the vicarage at Rangeworthy near Thornbury in a household that included their two servants.  He was vicar of Rangeworthy from 1855 to 1872.

In 1873 he and Alice moved as missionaries to Dunedin in New Zealand.  He was a priest at Dunedin until 1876.  He was appointed diocesan secretary and put in charge of the Theological College there.  From 1876 to 1881 he was the incumbent in the diocese of St Michael and All Angels in Christchurch.  We have been told by Father Michael Blain that the choirboys there found his accent most amusing.  In 1881 Edward and Alice returned to England where he served as vicar of St Mary de Lode with Holy Trinity Church, Gloucester.  He died on 30th November 1891.  Alice died on 16th November 1901 at Surbiton Hill, Surrey.  She had been living there with her brother, Edward.

It is interesting to note that Edward Gorton Penny was given credit for translating a book of prayers in the ‘Florida’ language spoken in Central Melanesian islands.  However some sources say that he was incorrectly given the credit for this.  We understand that the Church of St Mary de Lode in Gloucester has brass tablets in memory of Edward Gorton Penny M.A. and Alice Anne Esmeade Penny.

Charles Harford Lloyd – born on 16th October 1849, he was the youngest of the nine children of Edmund and Catherine Lloyd who had been living at Fairfield House for some time.  He became a distinguished organist and composer.  Read more about Charles Harford Lloyd

Graham Moore Lloyd – baptised on 13th June 1846.  He was at home in Thornbury with his mother in the 1851 and 1861 censuses.  He developed an interest in art and was to produce some beautiful pen and ink drawings, copies of which are still owned by family members.  In January 1864 whilst attending Cheltenham College he sat an exam for the Royal Military Academy and he obtained the sixth highest score in the exam.  On 15th January 1867 he was gazetted with the rank of Lieutenant.  He served in India from November 1867 to January 1869.

The 1871 census shows him as a Lieutenant, although on the census date he was again at home with his mother.  The census lists Graham as being ‘unmarried’, but the records show that he married Lucy Eliza Fynn on 8th January 1871 at St John’s Church, Woolwich.  Lucy was the daughter of William Fynn, a tailor from Cambridge and his wife, Martha.  At the time of the 1871 census Lucy was at home with her widowed father – interestingly she is also listed as being ‘unmarried’.  We can’t explain why both Graham and Lucy were shown as unmarried so soon after their marriage.  They had a son, Graham Moore born in Cambridge in 1871 who died as an infant, and a daughter, Christine, born in Woolwich area of London in early 1873.

The records of the Royal Artillery show that from April 1873 to April 1876 Graham served with 7 Battery 7 Brigade in Nova Scotia.  Lucy travelled with Graham, or joined him a little later, as they were to have three more children born in Nova Scotia: Kathleen in 1874, and twins Henry Augustus and Alice Marguerite in 1875.  From April 1876 to March 1880 Graham and the family were in Jamaica and another son, Charles Haldane Creed Lloyd was born there in 1877.  On 16th January 1880 Graham was promoted to the rank of Captain in the Royal Artillery and he returned to England in March 1880, several months before the rest of his Unit.  On 12th May 1880 Graham was retired with a gratuity, but no pension.  We don’t know why he came back early or took early retirement.  It might possibly be associated with the cutbacks in the size of the Army in order to reduce military spending or might be connected with the breakdown of Graham’s marriage.  The 1881 census shows that Graham, as a retired Captain of the Royal Artillery aged 35, was boarding in one part of Southampton and Lucy was living with twin babies, George ffrench Harford Lloyd and Violet Edith Lloyd in another part of the town.  Little Violet died later that year.  All Graham and Lucy’s children were brought up by Graham and other members of the Lloyd family.

Lucy moved to London, to live with a Colonel Stehelin.  She died in Lambeth in 1887, still in her thirties.  The burial records give her name as ‘Lucy Eliza Lloyd Stehelin’.

Graham stayed in Southampton.  On 5th May 1886 Graham was the subject of a court case, although he seemed an innocent party.  He had acted as guarantor for an old lady who was having difficulty paying her rent and the plaintiff wanted to recover the amount owing from Graham.  Graham was described as an insurance agent of St Albans Terrace, Derby Road, Southampton.

By the 1891 census he is boarding in South Stoneham in Southampton.  This census shows him as a widower and also living there is Henry A. Lloyd, aged 15 who was born in Nova Scotia.  Graham died in Southampton on 12th October 1898 aged 52.

Rodney Maclaine Lloyd – born on 3rd July and baptised in Thornbury on 29th September 1841.  He was the third son, and fifth child, of Edmund and Catherine Elizabeth Lloyd who were living at Fairfield House in Castle Street, Thornbury.  The 1851 census shows that Rodney was boarding in a private school in St Andrews in Bristol.  From there and at the age of 12, he entered the Navy in May 1854.  We have a fairly detailed account of his naval career from the newspapers.  Click here to read more about Rodney Maclaine Lloyd

Florence Kathleen – remained unmarried.  The census records show that Florence followed her bachelor brother, Charles Harford, around the country, living with him in Gloucester, Oxford and Eton.  Charles was a well known organist and composer and he composed ‘Praised Be the Lord Daily’ an Anthem for Harvest or General Use which he dedicated to Florence Kathleen.  She died in 1921 aged 73.