of Castle Street in Thornbury 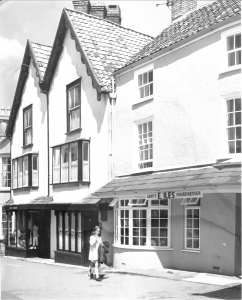 Percy Edward Lydford was born in the Christchurch area of Hampshire.  The register compiled in 1939 in the advent of war says that he was born on 30th December 1890 but his birth was registered  in the March quarter of 1892.  The 1901 Census shows him living in Park Terrace, Seamoor Road Bournemouth with his parents Julia and Frederick, who was a bootmaker.  Percy was the youngest of six sons.

Percy Lydford and Ellen Marlow were married in Fordingbridge on the borders of Hampshire and Wiltshire in the June quarter of 1918.  Ellen was born on 23rd May 1888 and she was brought up by her widowed mother in Fordingbridge.

Percy was a cabinet maker and taught apprentices in the navy.

By the mid 1920’s the Lydfords had come to live in the distinctive gabled house which is now 2 Castle Street.  We know this from the Electoral Rolls of the time.  However we do not know who actually owned the house as we have not yet seen the deeds.

Their children attended school in Thornbury at St Mary’s Primary School.  The birth of the eldest, Audrey Lydford on 2nd April 1923 was registered in the Bristol area.  Their twin sons John and Kenneth were born in Thornbury on the 17th December 1926.  The boys started St Mary’s School in 1930.  The notes on the school record say that due to bad weather they left school on 15 September 1930 and were readmitted April 1931.  It was either a long hard winter or the twins were considered a bit delicate!

The Lydford’s business was generally described as upholstery and house furnishing.  It included the sale of second hand furniture.

During World War II Percy Edward Lydford of Castle Street was A.R.P. warden from September 1939 to February 1945.  He was issued with the Defence medal and star in recognition of his work.

When the shop was put up for sale in 1947 the Penducks were mentioned as the tenants.  Click on the photograph on the left to see larger image.

A newspaper report of 22nd October 1949 told of an exciting adventure that John Lydford had had in his boat while sailing with Norman Knapp of Littleton.  They had sailed in a Kingfisher (an airborne life boat of the type used in World War II) to Ilfracombe.  They were leaving Ilfracombe and heading towards Barry when they got caught in an 80mph gale the rudder of their boat was damaged and started the craft taking on water.  They had to abandon their boat which lay at anchor when they picked up by a tramp steamer, the S. Erna on its way to Waterford.  It seems that at least one of the twins was not at all “delicate!”

The photograph at the top of the page was taken when the Lydfords owned the premises.  They seem to have sold ladies’ clothing as well as furniture.

The Lydfords lived in Thornbury on these premises for the rest of their lives.  The tomb stone in the Thornbury Cemetery says “Memories.  In loving memory of PERCY EDWARD LYDFORD passed peacefully away 17th July 1956 aged 64 years. ”

Mrs Riddiford who moved to Thornbury in the seventies remembers Mrs Lydford as a friendly old lady who used to walk her whippet dog every day.

We have found evidence that the house was put up for sale in 1976.

Click on the thumbnail image to see a larger version of the cover of the sale brochure.  In this brochure the house is described as

“a terraced double fronted period property with a commodious interior on three floors.  The property requires restoration and thereby lends itself to an interesting number of possibilities ….Planning permission in principle has been obtained permitting the conversion of the property into office suites.”

The building then had nine rooms and the ground floor shop was said to be “currently occupied as stockists of children’s clothing and toys and let on a full repairing lease of three years from November 8th 1974.”

Mrs Lydford died the following year and was buried with her husband.  Her tombstone reads “Resting. And his wife ELLEN MAY LYDFORD who died 17th September 1977 aged 89 years.  Awaken to eternal life. ”