Hector Maclaine – Hector was born in Scotland about 1785.  He was the youngest son of Gillian Maclaine Esq of Scallasdale, Isle of Mull and his wife, Mary MacQuarrie.  Hector married Martha Osborne in 1816.  She was born on 2nd May 1793 and was the only surviving child of William Osborne of Kyneton House.  Click here to read more about the Osbornes

Hector and Martha had a son, William Osborne Maclaine born on 6th March 1818 at Valenciennes in France.  Hector’s will written in 1845 indicates that he had two other surviving sons at that time: Charles Frederick Maclaine who was living with Hector’s widowed sister, Margaret Ann Craig and Hector Maclaine who was living in Lachine, Montreal, Canada.  We don’t know anything about either of these two sons, but we note that according to more than one family tree on Ancestry website Hector’s father, Gillian Maclaine, died in Chatsworth, Ontario in 1852 aged 102.  We are slightly intrigued by this fact because Gillian’s married daughter, Margaret Currie, also died at Chatsworth on the same day.  Is this a mistake, a co-incidence or is there any other explanation?

Hector inherited property in Thornbury from his father-in-law, William Osborne, including Kyneton House, the family home and The Close House (now 42 High Street) and Vine House (now 8 High Street) in the town.  The 1840 Tithe Survey shows that The Close House was owned by Hector Maclaine but it was void at the time.  He owned other property in the High Street, part of which he sold to the Board of Guardians for the Thornbury Union for the erection of The Register Office.

Martha died on 5th April 1841.  The 1841 census shows Hector and son William were at home in Kyneton House.  Hector was described as being ‘Army’ aged 56.  He was a Colonel according to other sources.  William was described as ‘B. A.’ aged 23.

According to the memorial erected in St Mary’s Church, Hector ‘served in the 64th Regt. in the West Indies and Surinam, joined the 57th Regiment in Portugal in 1811 as Captain, and was present everywhere with Lord Hill’s Division.  He fought at Victoria, Roncesvalles, the Pyrenees, in front of Pampluna, at Nivelle, Tarbes, Orthes and Toulouse.  Besides constant skirmishing, as he was attached to, and frequently commanded the Light Companies of Gen. Byng’s Brigade.  He was wounded and received a medal for his distinguished conduct at Nivelle.  He served afterwards in North America and France.  After the war he resided many years at Kington in this parish, and departed this life the 15th January 1847, aged 62‘.  After Hector’s death, The Close House descended to his son, William Osborne Maclaine.

William Osborne Maclaine – born in Valenciennes in France in 1818.  On 25th April 1849 William married Hannah (or Anna) Thurburn, the daughter of John Thurburn J. P. of Murtle, Aberdeenshire.  In September, 1848 Anna had had the honour of presenting Her Majesty Queen Victoria with a floral bouquet on the occasion of Her Majesty’s first passing up to Balmoral.

The 1861 census shows William as ‘landowner magistrate and deputy lieutenant for Gloucestershire’ aged 43, wife Anne aged 36 born in Scotland.  They were living at Kyneton with their two children: Hector aged 9 and John Thurburn aged 7.  They had three visitors: Mary Gregorson a widowed landowner aged 60 from Scotland, Angus Gregorson a cattle breeder in Australia aged 29 who was born in Scotland and Hester Jane Davies a daughter of a naval officer aged 36 from Pembrokeshire.  There six servants including James Legge a tutor aged 21 from Scotland.

The 1871 census describes William as a ‘M. A. Barrister not in Practice and Landowner’.  Anna’s cousin, Annetta Antonia Louisa Bowie aged 26 from Scotland was also listed as being there, together with Stewart Cecil Frank Angelsmith, B. A. Oxon aged 26 from Cambridge who was a tutor to 17 year old John Thurburn Maclaine.

The 1881 census shows William as a ‘Landowner M. A., J. P., and Deputy Lieutenant’.  Living with William and Anna were their children: John, a Justice of the Peace aged 27, and Elizabeth M aged 30 and six servants.

William was Mayor of Thornbury on three separate occasions – 1852/4, 1865/66 and 1876.  William appears to be very interested in education.  He made regular donations of £11 to the Thornbury National School and was the first chairman of governing body of the new Thornbury Grammar School following its amalgamation with Attwells Free School.  We have also seen references to a ‘William Osborne Maclaine Manuscript Collection’ at the Bodleian Library, but haven’t been able to find out any more about it.

According to the family diaries in Gloucester Records Office, William was obviously a fit man.  He spent a lot of time shooting and hunting and one Sunday he “walked to Thornbury Church.  Walked to Aust Church for afternoon.  Walked afterwards to Littleton.”  This may account for him living to the age of 88 years!

In 1948 Frederick Henry Burchell presented a talk to the Society of Thornbury Folk on his reminiscences of Thornbury in the closing years of the 19th century.  He said of William Osborne Maclaine:

‘The next gentleman who comes to my mind is Mr. William Osborn Maclaine who formerly resided at Kyneton House.  He was the owner of the Close, now the Playing Fields, and permission was given by him for the town to play in there.  It was no unusual thing to see three or four games of cricket going on there of a summer evening.  Years ago the early closing day in Thornbury was Thursday but the shops closed at 5 p.m. and not mid-day.  For many years Mr. Maclaine engaged the Tockington Band to play dance music in the Close every Thursday evening during the summer and a number of people generally attended there to indulge in a little bit of dancing.  I think Mr. Maclaine made very good use of his money and the wealth which he possessed.  When any special appeal was made to him for anything which was required in this town Mr. Maclaine used to say his share was 1/10th and I think that was what he generally contributed’.

Anna died 10th October 1882 aged 58.  William continued to live at Kyneton House and to own The Close House and The Vine House.  By the time of the 1901 census he had buried his wife and his three children.  He was living at Kyneton with his cousin, Margaret Greenfield and her daughter, Mary.  William died on 8th September 1906 and following his death his estate became the responsibility of his sole executrix Flora Maclaine Jenner Fust.  Flora was the the wife of Herbert Jenner Fust of Hill Court and one of William’s cousins.  In writing the will in 1892 William had made a bequest to Thomas Gully Latter who had died on 24th May 1905 pre-deceasing William.  In a codicil added in 1894 he gave an annuity of £36 to Ann Squire, his head housemaid.  Mary Greenfield was given a life tenancy of The Close House and the customary garden with stable erected on it situated on the other side of the footpath adjoining the Close House was sold to Henry Privett Thurston who was living at 40 High Street.

The Close House remained in the occupancy of Mary Greenfield until her death in 1938 when it was bought by the Council using money gifted by Mrs Violet Mundy.  The Council need to buy the house to allow them to remove a restrictive covenant on the use of the adjoining fields which prevented their use as playing fields.  We don’t know what happened to Kyneton House except that during the 2nd World War it was used by the Maritime Regiment and it later became a private school known as Westwing School.  It closed in the 1990’s and has since been developed for residential use.

William and Anna had three children:

Hector Maclaine – born on 24th November 1851 at Murtle, Aberdeenshire.  He was educated at Eton and Woolwich and commissioned into the Royal Horse Artillery on 6th January 1872.  He served for many years in India.  In December 1879 he volunteered for active service under General Roberts in Afghanistan where the English forces were fighting a claimant to the Afghan throne, Ayoub Khan.  On Christmas Day 1879 Hector was sent to the Khyber Pass.  He held the rank of lieutenant.  At the battle of Maiwand, fought on 27th July, 1880, Hector distinguished himself by his bravery.  After three hours of fighting his guns ran out of ammunition and he was attending to wounded men who had gathered at the guns.  He was captured and taken to Kandahar where he was treated badly in the first few days of his captivity.  Then a nobleman leader arrived in the camp where Hector was prisoner.  This leader had known Hector previously and he was given better treatment and held in the nobleman’s own bungalow.  Shortly after Hector was moved by Ayoub to another camp, but he was still treated well.  The English demanded Hector’s release and offered Ayub Khan an exchange of prisoners, but this offer was dismissed.  Thereupon General Roberts executed the famous march from Kabul to Kandahar, 313 miles over the worst country in Asia in 23 days in an attempt to save Hector.  He managed to destroyed Ayoub Khan’s large army with the loss of 40 men, but on the point that his army were breaking into the camp where Hector was held, a guard took it upon himself to slit Hector’s throat. 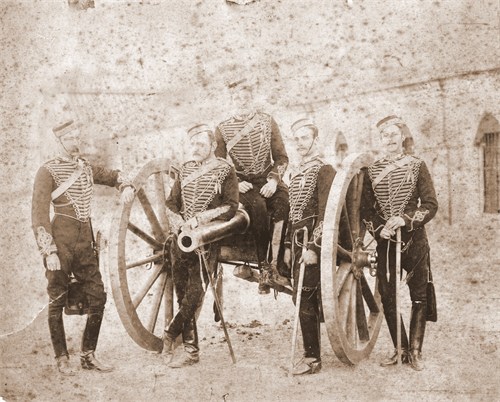 The above photo is posted on the Internet as being a group of officers including Hector who is thought to be the second from the right.  We can’t confirm this but we note are some similarities between that person and the photo shown above which is also thought to be Hector.  We would welcome contact with anyone who has further information or other photos.

Back in Thornbury, where the Maclaine family were very popular, a fund was set up to place a memorial window in the church.  The fund was so well subscribed that the surplus money was used to provide the fountain.  This was originally erected in a wall adjoining the High Street on land owned by the Maclaine family.  It was later moved from this site when the town’s fire station was extended, and the fountain was then moved to its present location, outside the NatWest Bank on the junction with Latteridge Lane.  Click here to read more about the fountain

Elizabeth Marie – born in Thornbury and baptised there on 27th May 1850.  On 15th June 1882 Elizabeth married Harwicke Lloyd Hardwicke Esquire of Tytherington, the son of John Lloyd Davies Esq.  Tragically she died on 6th April 1883, less than a year after her marriage.  She died at Kyneton House, having given birth prematurely to a son who also died, although her address on the probate records was shown as being Tytherington Grange.

John Thurburn – born in Scotland on 2nd July 1853.  John married Rachel Hay Miller, the daughter of the Reverend Patrick Leslie Miller who according to another website was descended from the inventor of steamboats!  At the time of his sister’s death in 1883 he was living at New Leas House, Almondsbury, although in the 1891 Census he and Rachel were living back at Kyneton House.  In 1883 he was lieutenant (supernumerary) of the Gloucestershire Yeomanry.  The tragedies that this family endured continued when John Thurburn Maclaine contracted influenza and after a week’s illness he died at Kyneton on 3rd January 1892 at the age of 38.  He was buried on 7th January and the parish magazine records the large turn out and the sympathy felt for the bereaved father. Rachel re-married in Chelsea in 1894.