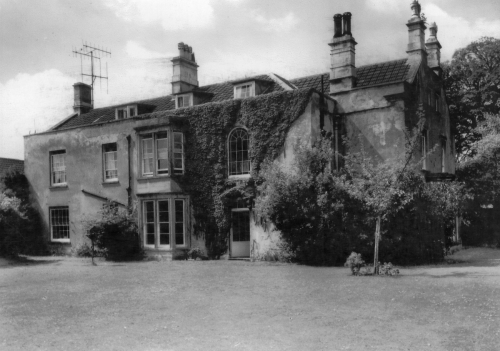 This photograph shows what is now Fairfield House in Thornbury from the rear in 1970.  Read more about the building.

We know the first owner of this lovely house was Edward Mathew who built it in 1788.

Edward Mathew (or Matthews).  The notes from Mr de Salis (one of its owners) in the Gloucester Record Office say that the Fairfield House in Thornbury was built by Edward Mathew, a relation of the then vicar.  Mr De Salis also says that Edward Mathew lived in the house until his death. We no longer believe this last assertion to be accurate.

There are many spellings of this surname and for consistency we have used the spelling Mathew, which was the name used in one of the earlier documents.

We know little about Edward Mathew at this time.  From the fact that he left property to a nephew William Bell of Tortworth and a great niece Susannah Pearce (daughter of John Morse Pearce and Elizabeth Bell) we have assumed that he was the Edward Mathew who was baptised in Tortworth on 17th September 1717 (according to the IGI).  At his death in 1788 he was 72 which seems to support this theory.  This would mean he was the son of Edward and Elizabeth Matthews.

We understand that his sister Mary Mathew (1709-1747) married John Bell on 2nd February 1731.  We are grateful to Kay Rea a local historian for the information that John Bell owned 70 acres of land in Tortworth.  Kay has given us more information about this family and it seems that Mary Mathew was “of Tortworth” when she married and so we are assuming that Edward also lived in this area.

In the documents of 1764 by which he acquired a neighbouring house, The Chantry, from its owner Sarah Harris and the holder of the mortgage William Gyles, Edward was described as a ship’s carpenter from Bristol.  The Record Office in Bristol shows that an Edward Mathew had property in the area of King Street and Queen’s Square at this time.  However the name is surely not uncommon and we cannot connect that Edward Matthew to Thornbury at this time.  It is noteworthy that Edward Matthew was a ship builder rather than a carpenter.  His obituary in the Bath Chronicle of 18th December 1788 described him as being in partnership with Mr Blannin.  A family historian on the internet quotes Bristol Ship Builders 1775 and 1793-4 and says that William Blannin or Blanning was a shipwright of Wapping who had a yard in Bristol.

Edward Mathew senior, whom we believe could have been the father of this Edward Mathew, died in Tortworth on July 18th 1751.

An “Assessment for the Relief of the Poor” dated 1770 shows that Edward Mathew owned several properties in Thornbury including The Chantry in Castle Street.  Other properties referred to in the assessment were “late Brutons,” “late Gayners,” “late Pontins” and another tenanted by John Wither” late Daggs” which presumably became Daggs allotments.

The Poll Book for 1776 shows that Edward Mathew was paying tax for “house and land.”   We are presently assuming that this was only one house and that that was The Chantry.

Edward’s wife Susannah died on the 19th July 1781.  We know from Scribes Alcove website that the parish records show Susannah was the second wife of Edward Mathew and that she had formerly been Susannah Weare.

We also have Land Tax Records from 1780 to 1783 that show that Edward Mathew was being taxed for two properties, one of which was very expensive indeed and was £1 17s 4d and the other was “Pontins” and was still a considerable property at 8 shillings.

We believe that Edward Mathew was living in The Chantry and that he was paying taxes on this and on lands near the Chantry.  We have an idea of when Fairfield House was built because it was not mentioned in his will of 19th February 1787 but in a later codicil in which it was described in the following manner;

“I Edward Mathew of the town of Thornbury in the County of Gloucester do make this my codicil to my last will and testament in manner following that is to say whereas I have by my said will given to my great niece Sarah Pearce four hundred pounds and to my great niece Susanna Pearce six hundred pounds now I do hereby revoke and disavow the said several legacies and I give to the said Sarah Pearce the sum of two hundred pounds and to the said Susanna Pearce the sum of four hundred pounds to be paid them respectively in six months after my decease. Item I give and devise unto the said Susanna Pearce all that my new erected messuage or tenement and garden by me lately built on and enclosed out of my Ground situate in the Town of Thornbury aforesaid and at present unoccupied and not finished together with a piece of my said ground adjoining to the garden wall on the south side thereof and to contain forty feet in depth from the said wall and forty feet in length and to be enclosed by Susanna Pearce her heirs or assigns.”

The codicil was dated 12th March 1788 and from the wording it seems likely that what is now Fairfield House was at this time nearly completed and still unoccupied.

Edward Mathew left property which included what is now The Chantry to sister Sarah Townsend for her life time and then to his nephew William Bell the son of his sister Mary.  Edward left Fairfield House to Susannah Pearce, the daughter of his niece Elizabeth Bell and her husband John Morse Pearce.

Read about the other owners of this house