of Rock Street and Horseshoe Lane

‘Bessie’ Neal and her younger brothers, Frank and Victor, all settled in houses in Rock Street and Horseshoe Lane.

They were three of the children of John and Annie Neal who lived at Gordon Cottage, Crossways.  John was an agricultural labourer from Sherston in Wiltshire.  Annie was born in Tortworth.  John married Annie Pegler on 14th May 1878 in Sherston.  He was aged 26 and the son of Thomas Neal.

They had seven children: Francis George born in Tortworth on 17th December 1877, Elizabeth Sarah born in Sherston on 31st May 1878, James born in Didmarton about 1880, Henry born in Sopworth in 1882, Albert born in Huntingford about 1885, Frank Edward born in Huntingford on 11th June 1886 and Victor born on 28th September 1892 and baptised in Thornbury on 4th June 1893.  The birthplaces of the children show that John seemed to move his family fairly frequently.

By 1891 John and Annie were living in the Thornbury area at Brinkmarsh near Falfield.  In 1901 they were living in Whitewall Lane at which time John was a gardener aged 51 and Ann was aged 49.  Of their sons, Henry died in Thornbury Hospital aged 28 on 5th August 1910.  In 1901 George was a Royal Navy seaman and James and Frank were stone quarrymen.  John is listed as still living in Whitewall Lane in the 1904 and 1907 electoral registers.  The 1911 census shows John and Annie living in Duckhole with sons, Frank and Victor; all three men were farm labourers.

The 1913 electoral register shows he moved that year from Morton to Cutts Heath.  The 1918 electoral register lists John, Annie, Jim and Edith Neal all living in Crossways.  We understand from his grandson, Arthur Neal, that John used to go with his cart into Bristol to fetch a load of fish which he took round selling at people’s houses.

Annie Neal died aged 68 and was buried in Thornbury Cemetery on 2nd June 1923.  John Neal died in Thornbury in 1932 and was buried there on 16th June aged 80.  The report of his death in the Gazette said that he was living in Pullins Green.  The funeral at St Mary’s Church was attended by a large number of people including Bessie, Albert, Frank and Victor.

Of John and Annie’s children:

Francis George (known as George) –  had already served 22 years in the Forces before the First World War started.  In 1909 he had married Jane Ellen Merrett who was born in Charfield.  The 1911 census shows George as a coast guard living at the Padstow Coastguard Station.  He and Jane had a daughter, Beatrice F who was 6 months old and born in Devonport.  He had to give up his hope of demobilization to serve in the War.  At the time war broke out George was still serving as Leading Boatman coastguard in the coastguard station at Padstow.  He was a leading seaman aboard the H.M.S. Monmouth which was involved in the Battle of Coronel off the coast of Chile on 1st November 1914.  She was outmatched by the German squadron which included the Scharnhorst and the Gneisenau.  There were no survivors and George’s body was never recovered.  He had served 27 years in the service.  He was aged 37 when he died and left a widow and two children, one who died shortly after George’s death.  Jane’s address at the time of his death was in Charfield.

Albert – when Albert got married to Lilian Mary Wilks on 6th January 1913 he was a seaman on the HMS Ringdove, the only Royal Navy ship built in Malta.  In 1915 he was serving on the HMS Prince George, in 1916 on HMS Magnificent and in 1917 on HMS Concord.

‘Bessie’ Neal – Elizabeth Sarah Neal was known locally as ‘Aunt Bessie’.  We don’t know when she settled in the house which became known as 7 Horseshoe Lane.  She was there in the 1921 electoral register and she continued to live there up to the mid 50’s.   In 1927 and 1931 Bessie was there with John Neal, presumably her father.

Bessie never married and she helped to bring up her nephew, Percy, who lived with her for many years following the death of his mother when he was only 3.  The register compiled in 1939 in preparation for he war listed Bessie and Percy living there.  Bessie died in Thornbury Hospital on 5th January 1956 aged 76.  Percy and his wife, Sheila took over her house (see below).

Frank Edward Neal – Frank was a stone quarryman.  He joined the 4th Gloucester Regiment on 31st August 1914.  He was working as an engine driver at Cutts Heath near Thornbury.  Frank’s service didn’t last long.  He was discharged on 15th September 1914 as not being able to be an efficient soldier.

Frank moved to the Gloucester area where he married Elsie Winifred Harvey in 1915.  They had one son, George Henry born in Gloucester on 27th April 1917.  We are not sure when the family moved to Thornbury.  George had a couple of short spells in the Council School in 1928 and 1929 although he seemed to return to Gloucester each time.  Elsie died aged 40 and was buried in Thornbury Cemetery on 1st August 1934.  The 1935 electoral register shows Frank was living in Gillingstool and in 1938 he was living in the house which became known as 3 Rock Street.  He is listed in this house until 1950.  He died in Snowden Hospital, Bristol aged 69 and was buried on 16th July 1953.  The burial record describes him as a labourer.  We understand that he was given the nickname of ‘Banger’. 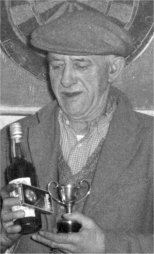 Victor Neal – Victor was the youngest child of John and Annie Neal.  Although born and brought up in the Thornbury area, he married Agnes Gertrude Carpenter in the Neath area of South Wales in 1914.  Their daughter, Ivy L was born there on 23rd April 1915, but their second child, Percy Ronald was born on 23rd April 1920 when they had moved to Thornbury and had settled in their house in Rock Street.  This house later became ‘6 Rock Street‘ when numbering was officially introduced in the early 1950’s.

Agnes died of consumption aged 30 and was buried on 2nd May 1923.  Victor re-married in 1931.  This time his wife was Daisy Gertrude Wickham.  Daisy was born on 25th July  1893 in the Wells area.  They had one child: Arthur Victor Henry born on 30th December 1931.  The photograph on the right below is a studio portrait of Daisy with young Arthur. 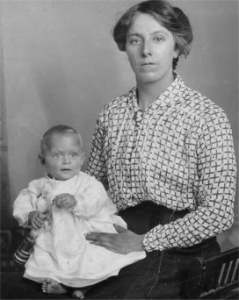 Victor worked for the Council, specialising in operating their steam traction engines.  He later moved to work for Mr Moxham at Lower Hazel where he operated their steam equipment designed for use on farms such as threshing machines.  Victor died on 12th April 1959 aged 66 years.  Daisy moved to live with her son, Arthur in the new council flats at 10 Stafford Crescent.  She died on 28th February 1973 aged 79 years.

Of Victor’s children:
Ivy – we understand she was quite young, about 16, when she died.

Percy – was brought up by his Aunt Bessie in Horseshoe Lane following the death of his mother when he was only 3.  In 1939 he was described as a waiter in the 1939 register.  He went on to work for the Thornbury Electricity Company assisting Bert Pridham.  In WW2 Percy joined the Tank Corps, serving in the military police.  He was saw action in Europe and we understand that he was amongst the first troops to enter Belson Concentration Camp, an experience which he found difficult to forget. 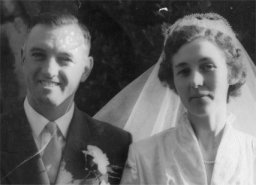 In 1950 and 1954 electoral registers Percy is shown as living with his Aunt Bessie in 7 Horseshoe Lane.  By 1958 Percy had married.  His wife was Sheila M Barge from Stone.  The photo on the left shows the two of them on their wedding day. They had three children: Robert who joined the RAF as a chef, John who joined the RAF and became an instructor and Sara who has kindly been in touch with us to correct this page.  At some time between 1958 and 1961, Percy and Sheila moved from 7 Horseshoe Lane to number 9 Horseshoe Lane. 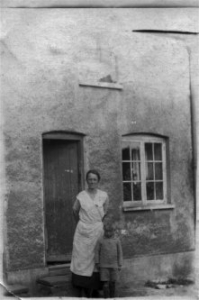 Arthur – got to know Thornbury very well.  When not at school, he spent his youth from the age of 12 helping Des Beszant on his milk round.  He gave up this work when he did his National Service in 1949.  He served with the R.A. Ordnance Corps based at Catterick.  On his return to Thornbury he worked for P.G. Hawkins which made used of his driving abilities in making deliveries.  He later became an ambulance driver.

Arthur lived with his parents at 6 Rock Street and moved with them to Stafford Crescent.  They went on living there following his marriage to a nurse, Hazel Davis ,who came from Earthcott.  Sadly Hazel died in 2006 on September 21st.  Arthur Neal died in October 2012.  Both were well known and respected in Thornbury and will be much missed.  We would also like to mention Arthur’s amazing memory for details about Thornbury and his kindness in using it to help the creators of this website.

The photo on the right shows young Arthur with his Mum outside 6 Rock Street.