George Nixon and his wife Rosa 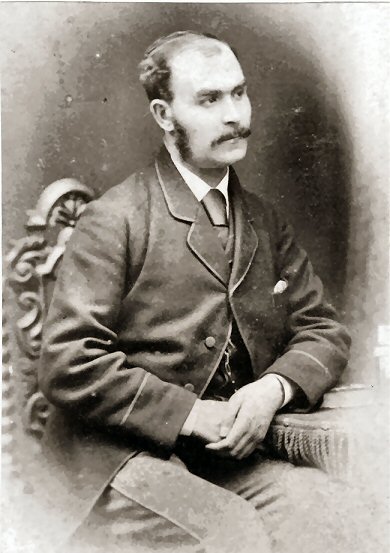 We are grateful to Stafford Morse whose book “The Development of a Country School” has provided the basis of much of this information.

On 17th May 1879 the new Grammar School was to be created in Thornbury from what had been Attwells School in St Mary Street and the old Grammar School in Castle Street.  It was to keep the name of Thornbury Grammar School for the next ninety-three years.  On 27th September 1879 there was the first meeting of the Governing body under the chairmanship of Mr. W. O. Maclaine.

One of their first actions was to appoint Mr. George Nixon as Headmaster.  He held the post for the next twenty-eight years.

At first the school was carried on in the old building in Castle Street while Mr Nixon lived at The Priory.  In July 1880 an article appeared in the Bristol Mercury to advertise the sale of both old Free Schools the Grammar School and the Attwells School.  We have a thumbnail image of the advert below left.  These premises were sold for £1000. The sale of the desks made only 12/3.

A piece of land known as ‘Putleys’ in Gloucester Road was bought from Mr. J. C. Gwynn.  It was a five acre site, with a gravel quarry in the north east corner.  The cost of the new building was met partly by the generosity of certain donors among whom Mr. John Cullimore is specially mentioned.

The birth of George Nixon was registered in Newcastle upon Tyne in Northumberland and he was christened on 16th December 1844.  He was the son of Joseph and Martha Nixon.  The 1871 Census says he was born in Wylam in Northumberland.  At the time of the census he was 29, unmarried, and described as the head of a grammar school in Stoke next Guildford in Surrey.  The first prospectus for Thornbury Grammar School refers to George as being L.L.B. of the University of London and late Assistant Master in Reading School.

We know that after his appointment as headmaster in Thornbury George Nixon lodged in the High Street.  This is confirmed by the 1881 census which shows he was lodging with Jane Ellis in a house which was later to become 43 High Street, and in the 1885 rate book which lists George as the tenant of the property which had been the Beaufort Arms Inn and later the Picture House. George Nixon’s salary at the Grammar School by 1883 was £70 per annum.

The school’s fees were £8 a year and the curriculum included Latin and Holy Scriptures, Prayer book and Catechism but not science or drawing (at least until 1892 – see below).  The Grammar School accounts for 1881 show that George Nixon was head of a school of up to 21 boys (the numbers vary from quarter to quarter between 18 and 21) who paid fees, which brought in a income of £156.  We know from various advertisements (e.g. a poster dated January 13th 1882) that the school had five scholarships which arose from the original charities.  Only the Attwells Scholarship paid the full fees of £8 for three years.  The Edwards’ Scholarships paid the greater part of the costs for two boys £6 each for three years and two years respectively.  Two White’s Scholarships paid £4 one for three years and one for one year.

The new school must have been an exciting project for George Nixon to be involved in.  The accounts for 1881 show that a new schoolroom cost £292 12s 6d.  A new hall was built and the grounds laid out and planted (another £53 15s 9d).  The furniture and fittings cost £37 9s and must have been very superior to the old ones that sold so cheaply.

George Nixon was involved in many activities in the town.  In January 1882 he gave a talk on Simon de Montfort at the Castle Coffee Tavern to the young men’s mutual improvement association meeting.  Although his name does not appear in reports of the matches in that period, he was also a member of the Thornbury Football Club.  “Football” at this time appears to have meant rugby football.  He later became  president of Thornbury Horticultural Society.

He married Rosa Cornock in Oldbury in 1883.  She was the second daughter of Levi and Emma Cornock of Oldbury House.  Her sisters, Leah, Evelyn and Edith were bridesmaids at their wedding.

The wedding seems to have been a major event in the area.  The newspaper report of 29th June says that the esteem in which the Cornock family was held caused ” a large assemblage of spectators.”  The road from the bride’s house to the church had several floral arches constructed at intervals.  These were decorated with evergreens, flags, banners and roses.  The vessels at Oldbury Pill had been decorated with flags and the church’s flag was flying.  As the newspaper said Oldbury on Severn was “en fete.”

In 1883 the newspaper reported the annual prize-giving at which Mr Nixon congratulated the scholars on the results of the examination and announced that out of 20 boys examined 17 were found worthy of mention.

The report of the Examiner dated December 1885 appears to imply that the school was doing well under George Nixon’s headship.  The report said that although the arithmetic paper for the boys in the Upper Division was a hard one they did very well.  The Lower part of the school fared less well but in algebra they were all very satisfactory.  The Latin, French and English papers all had favourable comments but it was said that they were less good at the written answers because they worked so slowly.

In 1888 the Gloucestershire boys who passed the examination and were awarded a certificate of merit were listed; Wickwar (presumably serving a much smaller area) had four boys; Thornbury Grammar School had one, Jeffrey Hignell.

The Trade Directory of 1889 shows George as Master of the Grammar School which then had an average attendance of 24 pupils. 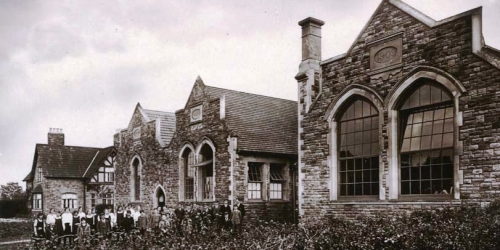 The 1891 census says George Nixon aged 48, the head of Thornbury Grammar School, and his wife Rose aged 28 were living in what is now The Priory in Castle Street with a “baby boy Nixon” under a week old.  The baby was later baptised as George Parks Nixon.

The school was still going through quite difficult times due to inadequate funding.  In 1891 the governors asked the County Council to aid technical and agricultural education.  This money was referred to as “whisky money” as it was the result of a tax on spirits which had been intended to help publicans displaced under a proposed bill.  The bill failed but the tax was still imposed and the money arising from it was granted to County Councils for technical education.  As a result of this money drawing classes were held in the school from 1892 (the drawing master cost £2 10s that year) and evening classes were also established in this subject.  The evening classes produced another problem which was solved when Sir Stafford Howard had gas lighting installed in 1895 at his own expense.  The benefits of gas came to Thornbury rather slowly and we have written about its installation in Thornbury elsewhere on this website.  Click here to read more.

By 1892 the numbers of boys were still down and for two terms there were only 16 boys.  There was a more surprising aspect that four of the nine possible scholarships had not been awarded.

Perhaps this was another way of saving money.

In December 1894 George stood to be elected to Thornbury Parish Council but failed to gain sufficient votes.

By 1894 a very nice house was erected for the headmaster in the school grounds.  The Thornbury Grammar School website tells us that John Cullimore personally contributed money to improve the original plan and add a bay window with French doors!  The house was big enough to allow for boarders and George Nixon accommodated these from time to time.

In 1897 a grave financial crisis arose and it was even suggested that the school should be closed.  There were drastic economies and George Nixon’s salary was temporarily cut.  That storm was weathered but the school still failed to prosper and standards were not always high.  Stafford Morse tells us that “Examiners” had been appointed who were the equivalent of School Inspectors and each year these had given satisfactory reports.  By 1897 it was found that the examiner did not actually visit the school!  After that time an oral and written examination was given and the examiner actually came to the school.  After this period the results were reported in the paper.

In 1900 the Board of Education came into existence.  When the Board inspected the school various improvements and alterations were suggested. The Bristol Mercury of May 19th 1900 reported that Her Majesty’s Inspector of Schools had sanctioned the appointment of Mr Alfred Burchell and Miss Annie Stone as provisional assistants.  The Governors of the Grammar School made a grant of £5 and the Thornbury School Board resolved to divide this between 22 scholars who attended most regularly.  The appointment of Mrs Styles of the Chepstow Board School was also announced and she was to have a salary of £80 per annum.

The 1901 census shows the Nixon family in the school house in Gloucester Road. George Nixon was 60 at this time and Rosa was 38. George the youngest was aged nine.  However the older children were all living in the house at the time of this Census; Violet Cornock Nixon aged 17, Gladys Mary Nixon aged 15 and Muriel Margaret Nixon aged 13.  Emma Cornock, George’s mother in law was also living in the household. The new room was built in 1906 and girls were allowed into the school.

The changes seemed not to suit George Nixon as he retired in 1907 and was replaced as headmaster by Charles Ross.

We have an image above of the school taken in 1932 which shows the older school buildings and the headmaster’s house.  The photograph on the right shows the three parts of the building more clearly.

Of George and Rosa’s children

George Parks Nixon joined the Hussars in Bristol 1914 at the outbreak of World War I.  He was said to be six foot tall.  He was discharged as unfit in September 1917.  When he left the army he was serving in the second Royal Irish Regiment and his address was Saintsbridge in Gloucestershire where he worked at the National Provincial Bank.

Violet Cornock Nixon was baptised 30th April 1884.  In the 1891 Census she was staying with her grandparents Levi and Emma Cornock. In 1901 she was at home in the Headmaster’s house in Gloucester Road.  She was an external graduate of the University of London.  The 1911 Census shows that she was boarding in a teacher training college called The Priory in Cheltenham where she was a “governess”. Violet never married.  She died on 6th November 1962 in Birmingham.  According to Wikipeda Violet was president on the first Executive Council of the League of Esperanto Teachers which was set up in 1949.

Gladys Mary Nixon was baptised 9th July 1886.  In the 1891 Census she was staying with her grandparents Levi and Emma Cornock.

Muriel Margaret Nixon was baptised 6th April 1888.  In the 1891 Census Muriel was staying with her grandparents Levi and Emma Cornock.  In 1901 she was at home in the Headmaster’s house in Gloucester Road.