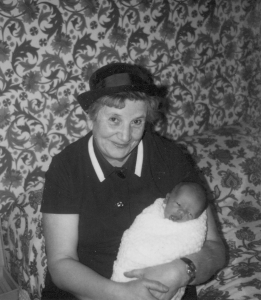 A transcription of an article written by Mary Neathey and published in the Outlook Magazine of the Thornbury and District Community Association in 1969.

Picture the High Street on a Sunday. You can see the length of it, from the bottle-neck, through its waist at Worthington’s, until it curves and divides at the Plain.  Then people it with pedestrians, slow pedestrians, who have time to greet each other as they work their way from the sun-caught “Swan” to the shadow over Pavey’s.  But this image is not of Sunday now, but of every weekday, when first Nurse Cotton came to live in Thornbury, seventeen years ago.  That old quiet town, which was more familiar with the drone of aeroplanes than with the rev of motor cars, has taken a shaking during these years, and when one remembers this it is possible to understand why there are still two sets of Thornburians.

Nurse Cotton, herself, then and for several years, was considered an outsider, but having been associated, as a District Nurse, with some intimate event in the lives of most of us, she is now respected and liked by both young and old.  The training, which has led her to this position, started before her seventeenth birthday, with a two year course in orthopaedics and tuberculosis at Frenchay Hospital.  After four years nursing in Bristol, she was State Registered in 1939, and then learnt her midwifery in the blitz.  The sirens did not only warn of coming bombers but, inevitably, of another coming baby.  The midwives accompanied the ambulances sent to the expectant mothers, and the decision, whether to deliver the baby at home, or risk the drive back through burning streets, was theirs.

After this harrowing apprenticeship, Miss Sanders, as she was then, moved to the Chipping Sodbury Hospital as Maternity Sister.  It was during this time that she experienced what she describes as her one regret in life.  Her great desire during the critical years of the early forties was to join the Princess Mary’s Royal Air Force Nursing Service, but owing to the lack of midwives at the time, her applications were consistently turned down.

After the war, she was appointed Matron at Hambrook, from where she married the man whom she had known in her training days.  For nine months, from shortly before her daughter, Suzanne was born, until she moved to Thornbury in 1947, she was a full time housewife, but found that her abounding energies were by no means exhausted, so it was with relief that she joined the Thombury District Nursing Association.

Needless to say, she is on call twenty-four hours a day, and inevitably, her job has given her some anxious and amusing moments; driving through a foggy night to Shipperdine with ditches on both sides of the road, or using her car as a snow-plough, as a towering drift cascaded on to the roof.  It is instances such as these and the appreciation of the family as a unit, that distinguishes district nursing from that in hospital.

Concerned as she is with people for so many hours of the week she finds her relaxation in a quiet meal with her husband, gardening, and being “with it” in her daughter’s company.

And it is some measure of Nurse Cotton’s success both as a nurse and as a mother, that Suzanne at 17, has just begun her training – as a nurse.