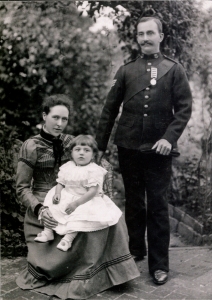 John Thomas Oates and his family occupied 4 Crispin Lane in Thornbury for many years in the early 1900s.  We are not sure when they moved into that house – they are listed in the 1918 Electoral Register as living in “John St”, which at that time probably meant Crispin Lane.  By 1925 the Thornbury Street directory shows that J. T. Oates lived in “Mutton Lane”, which is definitely Crispin Lane.

John Thomas Oates was born on 20th January 1873 in Wells Street, Cheadle in Staffordshire.  He was the son of John Oates and his wife, Eliza (nee Rugman). John (senior) was born in Ireland.

Click here to see an album of their family photographs

We believe his family may have come from Dublin were said to be ‘tinkers’.  Eliza was born in Thornbury and returned here after the death of her husband in 1874.

His army career seems particularly interesting.  He enlisted in the Somerset Light Infantry at Taunton on 22nd January 1891 when he was just 18 years of age.  His initial period of service was to be 7 years.  His enlistment papers show that John had been a plasterer before joining the Army.  He was described as being 5ft 4 inches tall and weighing 123 lbs.  His chest was 36 inches when expanded, and 34 inches when not.  He had a fresh complexion, brown eyes, brown hair and a small scar on his right cheek.  His religion at the time was Church of England.

He was appointed Lance Corporal on 5th September 1891, promoted to Corporal on 1st June 1894 and appointed Lance Sergeant on 15th April 1898.  During this time, he served in Gibraltar from 10th November 1891 to 18th December 1893.  He moved from there to the East Indies where he served from 19th December 1893 to 14th February 1899.  Although the records refer to the ‘East Indies’ as his base, he spent considerable time in India where he was awarded the India Medal with clasps for ‘The Relief of Chitral 1895’ and ‘Tirah, Semana and Punjab Frontier 1897’.  The Chitral Campaign took place in North West India (now Pakistan) in 1895.  Rebels had taken over the district and killed the ruling chief.  British troops were sent to re-establish order.

On 15th February 1899 he was sent home to UK and he was transferred to the Army Reserve on 19th October 1899.  He moved to Thornbury to join his mother who had returned here to live with her father, Walter Rugman.  We understand John was employed as a ‘birdscarer’ when he met ‘Annie’, whom he married in Thornbury Congregational Chapel on Easter Monday, 3rd April 1899.

“Annie” was Eliza Annie Fowler who was born in Thornbury on 22nd October 1873 (baptised on 25 January 1874), the daughter of George Fowler, a labourer and his wife, Elizabeth from Kington.

At the time of his wedding he described his occupation as ‘formerly a soldier’, but John didn’t hang around long after the wedding.  With trouble brewing in South Africa, he was recalled by the Army on 9th October 1899.  He was given the rank of Sergeant and sent off to South Africa where he helped in the ‘Relief of Ladysmith’.  This British-controlled town was under siege by the Boers from 2 November 1899 to 28 February 1900.  As a result of his efforts here he was mentioned in the dispatches of Lord Roberts, published in the London Gazette sold on Tuesday 10th September 1901, as having given special meritorious service during the campaign in South Africa.

When the Great War began, John went back into the action.  He re-enlisted in the Somerset Light Infantry on 22nd September 1914 as a private, but was immediately appointed Sergeant. On 9th November 1914 he was promoted to Colour Sergeant.  On 1st January 1916 he was transferred to the Machine Gun Corps.  On 8th December 1916 he was appointed Regimental Sergeant Major (RSM).  We understand that in view of his age his involvement was restricted to training men at Aldershot.  When the War was won, John was discharged on 4th October 1918 as being ‘surplus to Military requirements’.

During the time John was serving in the Army in South Africa, John’s son, William Jack Robert Oates was born.  This child was generally known as Jack Oates.  He was baptised on April 15th 1900.  The 1901 Census shows that Annie and their son, Jack, were living with her parents, George now a woodman and Elizabeth.  They were living in Watch Oak Lodge, the house situated behind the Castle on the lane leading to Kingtonmead Farm which is now part of The Hatch Hill Community.  The photograph at the top of the page shows John Thomas (again with his medal).  Annie is seated and is holding a child in a dress.  We believe that despite the dress, which was usual for a child of either sex at that time, the child was Jack Oates.

In 1909 the family had been living at Crossways and later in 1911 at Easton Hill when Gladys was enrolled at the Council School.  We know from notes which Harold made later that the family moved from Thornbury, first to Plymouth and then to Nottingham.  Harold himself apparently went to school in Mansfield.  The 1916 Prewett’s Street Directory shows that John Thomas Oates had returned to Thornbury and he was listed as living in “St John Street.”  When Harold was enrolled in 1918, their address was given as “John Street”, and the electoral register of 1918 shows the family living in St John Street – we believe however that this meant they were living in the house now known as 4 Crispin Lane as it was often referred to as part of John Street in the past.

The photo on the left below shows John in Crispin Lane.  John was noted as working as ‘Agent for Pearl Life Assurance Society’ in 1918 when Gladys moved to the Grammar School.  Harold also went on to the Grammar School, starting there on 13th September 1921 when his father was said to be working as a roadman.  When he left the School on 29th May 1925 it was noted in their records that Harold was to work as a clerk in Avonmouth Docks.  It was noted that his parents were anxious for him to take the post there as it was not likely to occur again for several years.

the former public toilets in what is now Quaker Lane

In civilian life, John was active in the local community.  He became a parish councillor and member of the Town Trust.  He was noted for his outspoken comment on local affairs and fought for the fair allocation of the almshouses and for the provision of the first public toilets.  These toilets served Thornbury very well for many years and were at the bottom of St Mary Street (see the photograph on the right), an area now called Quaker Lane.  The conveniences have now been closed because it was thought they were too expensive to maintain.  Planning permission is now (2015) under consideration to turn the properties into two small flats.

When he re-enlisted in 1914, he gave his religion as ‘Wesleyan.  However he became a member of the Congregational Church and did a great deal of local preaching.  He was also a staunch supporter of the Liberal cause.

John was killed in a motor cycle accident on the A38.  Newspaper reports show that John was riding back to his home in Crossways when he was hit by the tail end of a lorry which had overtaken him.  John suffered injuries to his head and was taken to Almondsbuy Hospital but he never regained conscientiousness and died next day.  He was aged 65 years and died on April 29 1937.  By this time he had moved back to Crossways where they lived in a cottage called ‘Elmview’.  The special register compiled in 1939 in preparation for the war shows ‘Eliza’ was living in Crossways.  She was described a ‘Pensioner’.   She died in Thornbury Hospital aged 85 and was buried in Thornbury Cemetery on 28th January 1959.

Of the three children; Gladys Dorothy (known as “Dolly”), Harold and Jack: Dolly’ – was known by the name of Gladys when she was admitted to the Thornbury Grammar School on 18th January 1918.  She left on 11th April 1919 and was shown in the school records as being ‘At home’.  We understand that she married Edgar John Bayliss in September quarter 1930.  We don’t know much about Dolly as she didn’t appear to live in Thornbury.  They had one son, Bryan, born in 1936.  Dolly died on 7th July 1962 aged 58 and is buried in the non-conformist section of Thornbury Cemetery.

Harold – became a marine engineer working in various places around the country including Bristol, Devonport, and Corby in Northamptonshire.  He married twice, first to Phyllis Joan Watts in Cranmore, Somerset in 1937.  Later, after returning to Thornbury, he married Joyce Harris, the daughter of Norman Harris of Eastland Avenue on 27th January 1954.  The photo on the right is taken from a 1950 Gazette newspaper which said that ‘H. Oates, a Thornbury man, had just been appointed as Vice Chairman of the East Midlands Area Conservative Trades Unionist and Labour Advisory Committee.