John Ogborn was the son of Thomas Ogborn.  He was born in Nempnett-Thrubwell in Somerset in 1819.  He married Eliza Carter on 4th August 1839 in Clifton, Bristol.  Eliza’s father was William Carter.

In the 1841 Census the couple were living in Clifton in Mall Place.  John was aged about 25 and was a butcher.  Eliza was also about 25 and they had a daughter Mary who was seven months old. The 1851 Census tells us that John had moved and now farmed 50 acres on the Hill at Almondsbury near Thornbury.  They had five children living with them at the time of the census: Mary Ann aged 10 and Joseph aged 8, both born in Clifton, Eliza aged 6 born in Filton, Charlotte aged 2 and Harriett aged 8 months, both born in Stoke Gifford. In 1860 John Ogborn a grocer of Almondsbury was charged with having defective weights.  This may indicate that John and Eliza had a shop as well as a farm.

The 1861 Census describes John Ogborn as a butcher and shows John and Eliza with their family at Almondsbury.  Mary Ann was aged 20, Joseph aged 18, Charlotte aged 17, William aged 8 and Matilda aged 6, Caroline aged 4 and Rosina aged 1.

By the time of the 1871 Census the family had expanded their business.  John Ogborn was shown in the Census as looking after the farm at Almondsbury Hill.  The farm was 50 acres.  Living there with him were Joseph, Charlotte, Harriett, William and Matilda, all presumably helping on the farm.  Meanwhile his wife Eliza according to the Census was in Thornbury in the property they had taken over at 8 High Street.  Eliza was listed as a butcher living there with her daughters Eliza, Caroline and Rosena.  Eliza had taken over the butchery business from Charles Young and his wife, Susannah, but Charles, Susannah and their three children appear to still be sharing the property with Eliza and her daughters.  Charles was described as a farmer with 43 acres employing one man.

On 19th March 1873 John and Eliza’s daughter, Eliza, married George Edward Pitcher in Thornbury.  George was a yeoman and the son of James Pitcher, yeoman.

On 31st October 1874 the Bristol Mercury reported the meeting of the Court Leet and John Ogborn was mentioned as an officer.  He and his fellow officer, George Walker, were described as ‘Carnals’ and as such presumably had some responsibility for the monitoring and control the quality of meat sold by the butchers.  He was also mentioned in the same capacity in 1880.

By 1881 the Census shows John and Eliza living in Thornbury High Street where John Ogborn was described as a farmer of 44 acres employing two men and two boys.  They had three children, Matilda, William and Rosena.  Six year old Mary Ann Pitcher was staying with them.  She was the grand daughter of John and Eliza.

On 22nd August 1881 the Bristol Mercury announced the sudden death of John Ogborn who died on 19th August 1881.  Although the 1881 Census had shown that the family’s home was at what is now 8 High Street, the newspaper article makes it clear that the family lived in Amondsbury although he was said to carry on “an extensive business at Thornbury and Almondsbury.”  The article said that John had had a seizure of some kind earlier and had broken his arm, from which he had not yet recovered.  This suggests that John had retired from the shop in Thornbury as the result of his health problems.  Eliza Ogborn died on 7th August 1888 aged 72.  She was buried in Almondsbury in the same grave as John and their daughter, Harriett who died on 26th November 1875 aged 25.

The Rate Books from 1890 show that William and Matilda Ogborn were the tenants of the shop in the High Street and of the land nearby and by 1899 Joseph was also listed with them.

The 1891 Census shows William, Joseph and Matilda Ogborn all lived at the High Street house and shop.  William was the butcher aged 38, Joseph was described as a dairyman aged 49 and Matilda as a housekeeper aged 35.  There were three servants living with them: Thomas Weekes a butcher aged 19 from Falfield and Stephen Bracey, a cowman aged 24 from Alveston and Edith Cook a general servant aged 17 from Thornbury.

In 1894 William and Joseph Ogborn continued the family tradition of being officers of the Court Leet of the Manor of Thornbury.  William was a carnal like his father.  Joseph was an ale taster. 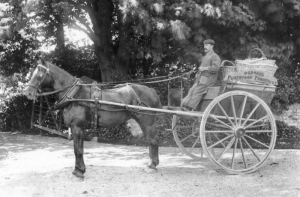 In 1897 the shop was trading as Ogborns.  The photograph on the right shows the delivery cart of Ogborns, “purveyors of meat.”

William Ogborn died on 31st March 1900 and the estate was divided into seven equal shares of £23 15 shillings and 6 pence.

The records of Gloucester Record Office contain drafts of the agreements that the other recipients signed to show they each received a share of the estate from Matilda Ogborn.

Matilda Ogborn became an equal partner with her brother Joseph in the businesses of farmers, butchers and milk purveyors carried on in Thornbury under the name of Ogborns in Thornbury High Street.  On 1st December 1900 Joseph Ogborn assigned his equal share of this business to Matilda Ogborn.  The agreement was that he would work as before on the milk purveying side of the business and he would be paid by Matilda for ten shillings a week and free board and lodging and laundry.  Matilda also took on the responsibility of paying the debts of the company and became the attorney for Joseph Ogborn.  The agreement was signed by Matilda, but Joseph was only able to make his mark.

The 1901 Census confirms that Matilda had taken over being the butcher although Joseph is also listed as a butcher living with her.  There are three servants: William Parsons a butcher’s assistant aged 22 from Falfield, William Tilley, a cowman aged 17 from Oldbury and Lucy Tilley a general servant from Oldbury.

Joseph Ogborn died aged 62 and was buried in Thornbury Cemetery on rd March 1904.

Up to at least 1910 the Trade Directories described Matilda Ogborn as a butcher of the High Street.  However the 1910 Rate Book shows that Matilda had vacated the High Street shop and land which were now being leased from Mrs Jenner Fust by Charles and William Parsons.

By an indenture of 24th of June 1909 William Davis Canning and Edwin Howard Porter acting as trustees for the estate of Charles Augustus Porter sold the house now known as Bank Cottage Castle Street in Thornbury.to Matilda Ogborn for £535.

The 1911 Census shows that Matilda Ogborn aged 56 and single lived in Bank Cottage with a maid called Edith Meech.

Matilda died on 3rd September 1923 aged 67.  At that time she was still living at Bank Cottage.  Her grave in Thornbury cemetery says

“In loving memory of MATILDA OGBORN who died September 3rd 1923 aged 67.  I heard the voice of Jesus say Come Unto me and Rest. ”

Probate of her will was granted to Francis Williams a seedsman and Frederick Henry Burchell an accountant.  Her estate was valued at £1,474 17s 1d.

Under the terms of the will that Matilda made on June 1st 1921 Matilda left her sister Caroline Weaver her old green and gold china tea set and her other sister Rose Parker her candlesticks.  She left her wearing apparel between both sisters.  She also left her a musical box and £100 to her nephew Edward Weaver.  Finally “in recognition of the devotion and attention of my companion Edith Eliza Meech to me in sickness and health during the many years she has been my companion” she left Edith Bank Cottage with a parrot and its cage and all of Matilda’s household effects plus a legacy of £100.  All her money was to be divided between her nephews and nieces except Matilda Pitcher and Edward Weaver and the share of Caroline Pitcher was to be double that of the nephews and nieces.

The children of Eliza and John Ogborn.