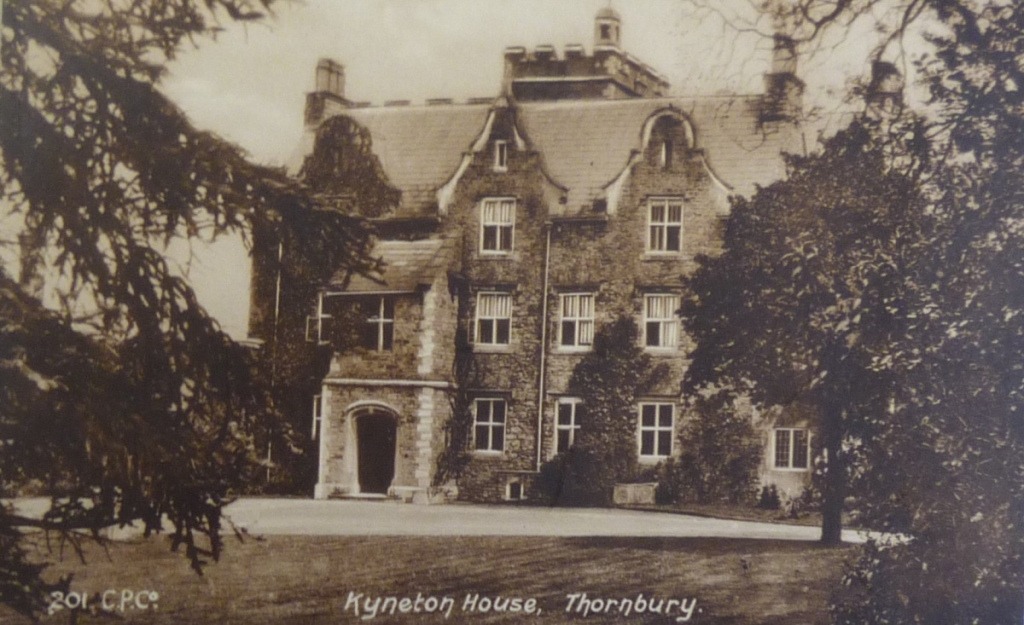 Kyneton House in Kington was the family home of the Osborne family from the early 1700’s to the early 1800’s.  It then descended to the Maclaines as a result of the marriage of Martha Osborne and Hector Maclaine.  Both these families were major landowners in and around Thornbury.

Meg believes that the Osbornes first became associated with the area when John Osborne married Sarah Tayer (or Thayer).  We haven’t traced the marriage record, but the IGI has a marriage in Bristol on 3rd August 1696 of a John Osborne of Wotton Under Edge to a Sarah TAYLOR and this could this be a misreading of Tayer.  Sarah Tayer was the daughter of John and Sarah Tayer, a wealthy Thornbury family who owned the small farmhouse which became Kyneton House as well as owning lots of other properties in the area of Kington, Morton and Thornbury.

When John Tayer died in 1688 his property was left to his son, John, who died in 1703.  In accordance with his will the property passed to his brother, Thomas Tayer who died in 1730 and it was then to be divided between Thomas’s three surviving sisters.  It is interesting that in his will John had made it clear that his sister, Sarah’s share was left in trust for her and he didn’t want her husband, John Osborne, to ‘intermeddle’.

Following Thomas’s death in 1730 there was a major dispute between the three sisters, Sarah, Elizabeth and Hester, about the division of the property.  The Court resolved that Sarah Osborne was given The Farm (the old name for Kyneton House) and various closes nearby, Elizabeth was given various closes at Mumbleys and Hester was given the Vine House and closes including Wellfield.  The Vine House was the old name for the property in the High Street, now number 8, the Moghul Indian Restaurant.  Although the ownership of the property was divided, there was a bond agreed between the sisters which allowed Sarah the use of all the properties.

Sarah died on 27th February 1749 aged 71 and is buried in the same grave as her parents inside St Mary’s Church.  Her grandson, William Osborne claimed her property.

We should point out that there is some confusion over the parents of the three children, Mary, Martha and Thomas.  The parents of these three children as shown in the baptism records were William and MARY Osborne, yet the monumental inscriptions on the grave of Thomas and Martha show that William and MARTHA were the parents.  In Martha’s case we also have a court record showing that the Martha Osborne who married William Cullimore in 1766 was the daughter of Martha Osborne.  We have no explanation of these contradictions.

We know from the Kington land tax records that at some time between 1727 and 1737 William had bought the property now known as The Close House and adjoining closes of land.  In the records then the property was identified as being ‘late Greenfields’.

William died intestate on 5th November 1743 aged 46 and was buried in St Mary’s Church.  We know from court records and other documents that Martha became the owner of The Close House and it was noted that she spent some time living at The Close House during her widowhood.  By 1776 she had moved elsewhere and her daughter was noted as being the occupant of the Close House.  Martha died aged 87 and was buried on 20th January 1787 with other members of the Tayer family inside St Mary’s Church.

William Osborne (about 1732 – 1808) – in 1750 William inherited the property of his grandmother, Sarah (nee Tayer).  This gave William Kyneton House and the closes around there.

William’s first wife was Elizabeth Stokes, daughter of Edward Wall Stokes of Almondsbury, whom he married in 1757.  We are not sure when Elizabeth died, but it must have been before 1789 when William married again.

William and Elizabeth’s children all died relatively young and unmarried.  We are grateful to Sir Nicholas Mander for the images from William’s family bible, which provide the birth dates of three of their children John born 27th April 1760,  Mary born on 27th May 1763 and Elizabeth born on 9th July 1764.

The last of their children to survive was Elizabeth who inherited a lot of property around Almondsbury and Olveston from her mother (connected to the Stokes, Champneys and Hollester families).  When Elizabeth, the daughter, died in 1802, much of this property was left to her father, William Osborne.

In 1765 following the death of Hester Raymond, his grandmother’s sister, William claimed the Vine House and associated lands.

There is an agreement dated 15th July 1776 relating to the barn situated on the opposite side of the footpath adjoining The Close House, just off the High Street.  George Rolph Senior, the owner of land adjoining the barn agreed to allow William Osborne, or his workmen, to enter his garden to repair or rebuild the barn.  At the time of this agreement, The Close House was owned by William’s mother and occupied by William’s widowed sister, Martha Cullimore.  Martha had married William Cullimore on 3rd April 1766.  They had at least two children: William born on 3rd December 1766 and Martha born on 9th January 1770.  William Cullimore snr died of smallpox aged 39.  He was buried on 18th December 1773.  In his will dated 10th December 1773, William made several bequests including £1500 to be paid with interest to his daughter, Martha, when she reached the age of 21.  The rest was left to his son, William when he became of age.  William who was a tanner living at Mitchelldean finally received £1435 2s 6d.

When Martha died in 1787 William Osborne claimed The Close House and the associated lands.  William’s daughter, Elizabeth, is known to have lived there for several years after Martha Cullimore died and she continued there until her own death in 1802.

According to the IGI, on 6th August 1789 William married his second wife Grace Watts at Olveston.  She was the widow of James Watts and her maiden name was Boulton; she seems to have had only one son also called James Watts baptised in Olveston on 23rd August 1778.  James Watts was buried in Olveston on 28th December 1788.  William and Grace Osborne had one daughter, Martha Osborne, born on 2nd May 1793 and baptised on 4th September 1793.

William was Mayor of Thornbury in 1791/92.  He died aged 75 and was buried on 27th September 1807.  He was buried at Quaker Burial Ground at Lower Hazel, Alveston.  According to his last will he said “I wish to be interred in the South West corner of the Burial Ground belonging to the Society of Quakers at Hazel in Gloucestershire, near the spot where the family tomb stood which was sometime since taken down and is now lying against the wall there”.

The notice of his death published in the Gloucester Journal described William as a gentleman of sound judgement, great integrity and a liberal benefactor to the poor.

In his will, William left his property to his wife, Grace, during her life or widowhood, and after her decease or re-marriage it was left to their daughter, Martha.  Grace died at some time around 1822.

In 1816 William’s daughter, Martha, married Hector Maclaine and the estate eventually passed to the Maclaine family.