of The Plain and High Street, Thornbury 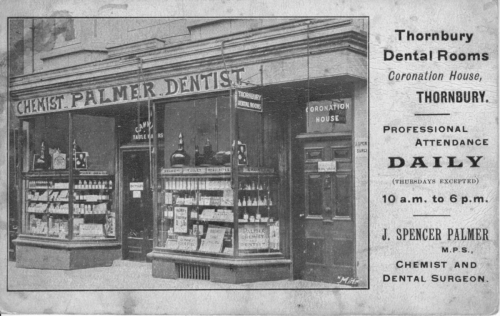 We are fortunate to have a wealth of information about the Spencer Palmer family who lived in Thornbury.  We are very grateful to Meg Wise of the Museum Research Group for the detailed history she has compiled and to various members of the Spencer Palmer family who provided the Museum with many useful and interesting documents.  These include one document detailing the reminisces of James’s youngest daughter, Peggy from which we have quoted extracts on this page.

James was born at the Lizard Lighthouse on 22nd April 1852.  He was only child of Hugh Palmer and his second wife Mary Matilda Cripps, who were married in Bath in 1850.  We understand that the name of ‘Spencer’ came from the maiden name of Mary Matilda’s mother who was Susanna Spenser who had married David Cripp in Bath on 2nd February 1804.

Hugh was from Pembrokeshire and had been a lighthouse keeper in the Isle of Thanet area before coming to the Lizard sometime before 1851.  Hugh’s father had also been a lighthouse keeper and several other members of the family had done their duty in this way.  Hugh married his first wife Anthaninah Bailey in Dale, Pembrokeshire in 1832 and Hugh and Anthaninah produced several children including Elizabeth, Maria, John, Sarah, Anthaninah and Hugh jnr.  Anthaninah died in Cornwall in 1849.

According to James’ daughter, Peggy “Aunt Sarah Palmer, 17 years older than James, came to live with us in her latter days.  She was as tough as she was deaf; she survived Father, who died in his 72nd year, and passed away herself in the care of our widowed mother, at the ripe old age of 95“.  The census records show that Sarah seems to have lodged with different siblings over the years and had previously lived for a while with James in Bristol before Peggy was born.

“James had been brought up in the Church of England, attending the parish church at The Lizard with his parents and receiving his early education at the Rectory, shared with the sons of the Rector who was a classical scholar and gave them all a good grounding in Latin.  Later on he was a boarder at a school in Truro.  James was apprenticed to a chemist and druggist in Penzance.  Afterwards he was employed by a firm of chemists off Bond Street, London where one day a footman from Lord Randolph Churchill’s household came in to buy a feeding bottle for the new baby – Winston!”

Although Peggy’s comments above include a mention of the fact that James was brought up in the Church of England we understand that he and his family were deeply religious and had become Plymouth Brethren at some point.  James’s faith was obviously very strong and it seems to to have helped him at the terrible time when his son Charles Stanley Spencer Palmer was killed.  Click here to read that story.  His commitment to the Exclusive Plymouth Brethren was such that he started to hold meetings at his own home, although his daughter Peggy says that a small room elsewhere was later rented for the purpose.  The meetings were largely in silence, although as Peggy explained it; ‘Hymns were given out spontaneously and Father used to start them…. The singing was unaccompanied in the morning, and also in the evening, when the Meeting took the form of a Bible reading.’

The 1881 census shows James had moved to Bristol.  He was living in Cheltenham Buildings, St Pauls at the time of the census.  In 1887 James married Amy Roach, the daughter of a master carpenter and builder named John Roach.  John was originally from Wotton under Edge but ran his business in Charfield for many years, employing 8 men by 1881.

The 1891 census shows James and Amy living at 67 City Road, St Pauls in Bristol.  James was listed as a ‘Registered Chemist and Druggist’ and he and Amy already had two children: Arthur Hugh born in 1888 and Lucy Evelyn born 1890.  All the children had ‘Spencer’ as part of their name (a tradition which continues with the grandson and his daughter).  An advert printed after he moved to Thornbury showed James had come ‘From Ferris & Co., Bristol’. We have created a separate page to display a sample of James’s adverts – click here to view these.  Interestingly we have seen also an advertisement for Ferris & Co of Bristol and they, like James Spencer Palmer, claim to be “chemists to Her Majesty the Queen”.  One of James’s best adverts was printed in the Gazette in 1922 when there were rumours that the shadow of a full grown lion could be seen at certain times of the day in the High Street – we don’t know if James started the rumour, but he promoted it in his advert and told readers that they could ‘view the lion quite safely from Coronation House’ – thus encouraging them to come in to the shop!

The family came to Thornbury later in 1891 and they lived at first in the house and shop on the corner of the High Street and The Plain, which was later given the address of 1 The Plain.  All James and Amy’s other children were born here: Ellen Irene (Nell) in 1892, Nina Irene (Nina) in 1894, Charles Stanley (Charlie) on 26th January 1896, Robert Lewis (Bob) on 2nd April 1898, and Florence Margaret (Peggy) on 27th July 1900.

A newspaper report of 18th February 1898 gives a picture of the difficulties of shopkeepers in Thornbury.  James Spencer Palmer was summoned by the police for leaving two barrels out side his shop for two hours and blocking the pavement.  It was said that that the larger one had been unpacked and straw was blowing about and could have frightened the horses.  Mr Spencer Palmer’s defence was that the road was very wide outside his shop so pedestrians could have stepped onto the road and that many of the shops in Thornbury had no rear access so unpacking was often done in the street.  Apparently he had begun to unpack the barrels but was called away and the barrels contained drugs which could not be entrusted to his assistant and so he was forced to leave them on the pavement.  The case was dismissed.  It is interesting that no one raised the possible dangers to the public of the drugs being left unattended on the main street for more than two hours.  This would appear to be another example of the more relaxed attitude to health and safety which prevailed at that time.

In 1902 James moved his business and his family to brand new and much larger premises further up the High Street.  The premises was called ‘Coronation House’ because it was built in the same year as the coronation of Edward VII.  In her memoires Peggy claimed that there was no other pharmacy in the area, the nearest being in Berkeley and Bristol.  She said that although the shop was new, being built to James’s specifications, it was still old fashioned in many respects.

Peggy recalled several amusing stories of customers in the shop – the child who ask for ‘Animated Pictures of Queen Anne’ which proved to Ammoniated Tincture of Quinine, the old lady who asked for ‘Presbyterian tablets’ for her indigestion when she meant Dyspepsia. James Spencer Palmer kept a talking grey parrot in the shop to help to attract customers.  James was also keen on clocks and watches.  Peggy writes “Just inside the entrance was a glass case full of sponges, on top of which was a ship’s chronometer which could be relied upon to keep Greenwich Mean Time.  People would often drop in just to see the time.  Behind the chronometer were two large mounted telescopes, the larger being several inches in diameter.  When business was not very brisk, Father would sometimes take the big telescope out on to the pavement and insert a periscopic lens through which it was possible to look at sunspots.”  Click on the thumbnail on the left to see James on the pavement with his telescope.

Versatility was James’s trademark.  He boasted that his shop was “a high class up to date pharmacy and one of the largest and most completely stocked in the country.”  He made his own cures.  Christiana Channing, a long term patient at the Thornbury Union Infirmary, was a beneficiary of one of these.  Apparently she was completely bald at Christmas 1902 but within four months of using “Palmer’s Hair Wash” the results were remarkable enough for her portrait to be displayed in his shop window.  After all as Spencer Palmer said “Facts are stubborn things and a local case like this will of course bear the strictest investigation.”  Of course.

Apparently James could also offer something that some of us today would gladly take advantage of – “absolutely painless extractions by a new process perfectly safe and leaving no unpleasant after effects”.  This was a bargain at “2/6 per tooth” (twelve and a half pence).  It was followed by “perfect fitting of artificial teeth.”  After all as he said himself; “plenty of people can publish their own portraits but they cannot all put the word dentist after their names.”  Well it is hard to argue with that.

Another of James’s hobbies was violins.  He could not play but he would buy old ones and work on them, scraping off all the varnish and restoring them to beauty and full working order.

James was also a keen contributor to the local press.  In browsing the newspaper archives at Gloucester Archives we never fail to be amazed at quantity of letters published from James and the range of subjects covered and the level of detail in many of those letters.  He specialised in letters on his favourite subject of astronomy and we understand James also published and sold an annual Almanac which had a wide circulation.  Many of his letters were very detailed and show James’s desire to share his knowledge of subjects that interested him.  However the letter on the right shows a lighter side of his character.

In March 1923 James had an amusing experience.  Having bought a copy of the Dentist Register for 1923, James was vexed to see he wasn’t listed in it.  He wrote to the Dental Board asking why he was left out.  He was told that the Board had been notified that James had changed his address to one in London in 1916, and when they had written to him at that address in 1919 they had received a reply that ‘Mr J. S. Palmer died of wounds received while in action in France on October 18th 1917’.

Photos of James, Amy and their children can be found in the Family Album – click here to see these photos

Click here to read about James and Amy’s children