Joseph Parslow and Joseph Parslow junior, both had a major influence in Thornbury. However although the name of Parslow appears in many documents involving land and business in Thornbury, we have failed to find out much about the Parslow family.

We believe that Joseph Parslow the elder was the mayor of Thornbury in the year 1808/9.

A conveyance of August 11th 1812 described Joseph Parslow as having “lately erected” six houses which we now know to be 32 to 42 Castle Street on the site of what had been three buildings.  Read about the earlier history of this site

It seems that Richard Hawksworth had at some stage converted these buildings into a messuage and a malt house with a stable.  Joseph Parslow bought Richard Hawksworth’s properties by a lease and release of April 1807 together with the accompanying yard, garden and orchard containing one acre and one “parrock” which was known as Draycotts and which had once been part of Tiltfield.

In 1809 the Land Tax Records ends with two entries bracketed together.  One says “Joseph Parslow for Stone’s” against a property measuring one burgage plot and “Joseph Parslow for malthouse and stable” against a property measuring two and one-third burgage plots.  These entries are starred and there is a footnote which reads “the above is divided into three equal parts two parts of which Mr Parslow has sold; one to Mrs Richards and another to Mr Neale and the other he holds himself.”

This note seems to indicate that soon after he built the six houses Joseph Parslow sold off four of them, two to Mrs Ann Richards and two to Mr Neale.

To read more about what happened to these six individual houses click on the appropriate link below;

It seems that the six houses were not Joseph’s home or even his only properties.  In the 1812-1814 period Joseph Parslow was also said to be using a property that was owned by William Bell and which had a very large rateable value indeed of £2 5s 4d.  We now know this property included the Chantry House, which Joseph Parslow bought from William Bell.  However it is a little odd that the conveyance of the Chantry from William Bell the younger to Joseph Parslow was actually dated 25th March 1815, which was of course after the will was written.  This apparent anomaly is explained by an abstract of title dated 1854 held by South Gloucestershire Council in the deeds of Stokefield House, which was also built on land owned at one time by William Bell.  On 10th July 1812 Joseph Parslow contracted with William Bell of Kingston upon Hull to pay £3150 for a considerable property, including that in the area of Castle Street.

The will of Joseph Parslow the elder also refers to this agreement with William Bell of Kingston upon Hull in Yorkshire that had to be paid in three instalments.  Joseph had paid one instalment and he was concerned that should he die before the other two were due (on March 28th 1814 and 25th March 1815) they should be paid by his sons in equal shares.  In documents dated 24th and 25th March 1815 William Bell acknowledged receipt of the last of these instalments.

Joseph Parslow and Anna Jemima Green married on 1st August 1780.  Anna Jemima then living in  Bermondsey in Surrey and Joseph was from Southwark.

Their elder son, Hamilton Green Parslow died on 5th April 1817 aged 34 years which means he was born about 1783.  There is a record of a baptism of Hamilton Green Parslow son of Joseph and Anna Jemima Parslow in Bermondsey on February 12th 1783.  In this record Joseph Parslow was described as surgeon.  We believe that Hamilton was a clerk to George Rolph jr.  Three documents are on the Ancestry website which refer to an agreement for clerkship to George Rolph in 1798 at which point Hamilton Green lives in Bermondsey and his father HJoseph Parslow is again referred to a surgeon.  A second  transfers the clerkship to Thomas Biddle on 17th Jun 1803.   The third of these documents dated 1806 refers to Hamilton Green Parslow as an attorney of Wotton under Edge.

We also have found the record of the death of Joseph Parslow the younger who was buried in Thornbury on 6th June 1846 aged 51 years which implies he was born about 1795.  Joseph was also baptised in Bermondsey.  The baptism of Joseph the son of Joseph Parslow a surgeon and his wife Anna Jemima was recorded on 8th April 1795.

Joseph Parslow junior’s will asks that he be buried in the family vault in the nave of St Mary’s Church in Thornbury.  We have not been able to find this vault.

Joseph Parslow the elder’s will of 1814 left his wife, Anna Jemima Parslow the Chantry House in Thornbury which appears to have been their home at that time and all his goods and furniture in the house (including his “Brandy, Rum Wine Cyder and Beer”).  The house included a messuage or dwelling house now used as a “Back kitchen, Dairy, Brewhouse, Corn Loft and Cheese Room, and a room over the same and a cellar under the same, together with a Coach house Stable and Coal house” for her life time.  After her death Joseph Parslow bequeathed all this property to his second son, Joseph Parslow, the younger.  Anna Jemima Parslow was buried in Thornbury on 9th August 1824 aged 71 years.

Their elder son Hamilton Green Parslow was to inherit from his father, Joseph, a

All this was occupied at that time by Joseph’s sister Elizabeth Hall, a widow at a rent of £45 a year.  The will decreed that she should continue to live on the property for this rent but that she should receive £10 a year charged on the the property inherited by Anna Jemima, Hamilton Green and Joseph Parslow the younger.  Elizabeth Hall died in Rockhampton in 1821 aged 73.

Hamilton Green also inherited “two closes of meadow or pasture ground called Upper and Lower Blakes Grove containing together about four acres and a half” in the parish of Thornbury which were at that time in Joseph’s own occupation.

The properties in Rockhampton and Thornbury left to Hamilton Green had a charge upon them which was intended to give Anna Jemima an income of £100 a year for her life.

The younger Joseph Parslow acquired more than the Chantry House after his father’s death.  He was also left “all that Barn, Cyder Mill house, Stable, Pigstye, Bartons, Closes of Ground, Orchards and premises containing about eleven acres and a half now in my occupation except a close called The Five Acres in the occupation of Henry Honeyborne as my tenant thereof”.

As well as all that Joseph the younger inherited

The property that Joseph inherited also had a charge upon it which was intended to provide Anna Jemima with another £100 a year for life.  Joseph also inherited all his father’s

“Shares Interest and Capital in the Bank carried in the Town and Borough of Thornbury aforesaid under the Firm of “George Rolph, Joseph Yates, Edward Wilkins And (me the said) Joseph Parslow.”  The website of the Royal Bank of Scotland confirms that although the Thornbury Bank was set up by George Rolph as ‘Rolph and Co’ it had become ‘Rolph Yates and Parslow’ by 1812 and at that time the partners included Joseph Parslow.  This Bank, now called NatWest, stands on The Plain in Thornbury. 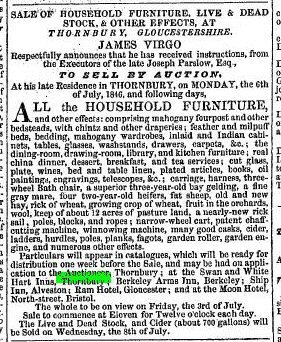 A further clause in Joseph’s will imposed a charge on his estate (except that which was left to his wife) of £60 a year which was to be paid to John Parslow, a yeoman, during his life time and then to his wife Mary, if she survived him, £50 a year for her life time.  Four hundred pounds was also intended to be used by John Parslow for him to leave to any person or persons that he chose to nominate in a properly signed and witnessed will.  John Parslow died 25th October 1815 aged 82.  His wife Mary proved his will but died before it could be administered.  She died intestate on 28th April 1818 aged 74.  A document at Gloucester Records Office refers to this and appoints Hannah Hawker as the nearest heir.

Joseph Parslow junior inherited his father’s property and continued to play a role in Thornbury Bank like his father.  In the 1841 Census the entry says that he lives in “Chantry House” in the High Street (now the part called Castle Street).

In this Census Joseph’s age was about 45 and he was a banker.  Living with him were his servants, Hester Olive (who received bequests in his will), Hannah Poole and Emmma Burnell and someone called Elizabeth Johnson with her one year old daughter Mary. 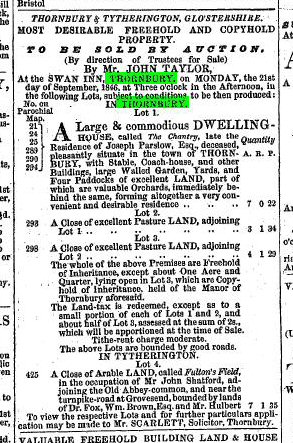 29th August 1846 sale of land and property of Joseph Parslow

Joseph’s will of 26th May 1846 made no mention of any close relations, so we assume he did not marry or have children.  He made arrangements for his estate to be sold by auction and for various bequests to be made from the proceeds.  He left £400 each to his cousins, Martha Hall and Elizabeth Hall, children of his late father’s late sister Elizabeth.  He gave his servant Hester Olive the £200 secured to her by his bond plus £100 provided that she was still in his service at his death.  In a codicil to his will he left her a further £50.  William Chitts, another servant, received £100 and the other servants £25 each.  To the partners of the Thornbury Bank he left £10 each so that they could buy mourning rings.  The residue of his estate was to be divided amongst the children of Mrs Elizabeth Hall (his father’s sister) and of Mr. John Lane Green late of Lewisham in the county of Kent, surgeon, deceased, brother of his late mother.

Joseph Parslow junior must have been very unwell at the time of his death, as the will was signed by Samuel Gingell at his request.  He died on 30th May 1846 aged 51 and had asked to be buried in his family’s vault in the chancel of Thornbury Church.  The sale of the property by auction seems to have taken place in accordance with his will.  His goods (including rather a lot of cider) seem to have been sold first, on July 6th 1846, as the advertisement on the left shows us.

The deeds of the Chantry also include a document dated 21st December 1846 which refers to the sale by public auction of Joseph Parslow’s property after his death.

This property included; “Lands in Tytherington”, “and the Chantry House and coachhouse stable cider house and outbuildings courts and gardens containing about one acre.  All formerly two closes of meadow or pasture behind the said messuage and buildings about eleven acres but since divided and now together as six closes of ground abutting upon the town street of Thornbury”  “Secondly all that one small close now converted into an orchard adjoining and formerly belonging to a messuage of Thomas Burnell deceased containing by itself one burgage about one acre or thereabout and also one parrock of pasture ground adjoining to said close about one acre and all now that one parcel of land one quarter acre formerly in Tilt Field but inclosed called Draycott”.

The above description may seem difficult to follow but the schedule makes it more clear how much of Thornbury Joseph Parslow actually owned at his death, leaving aside the “lands at Tytherington”.

Click on the thumbnail photograph of the Tithe Apportionment Map above to see the lands listed on the schedule below.