Charles Henry Parsons was born in Whitfield in the December quarter 1868.  He was the son of Enoch Henry Parsons, a carpenter and his wife, Kezia.  In 1871 the family lived at Whitfield.  By 1881, Charles was living and working at a nearby farm owned by a widow, Elizabeth Hook.  Charles was described as a farm servant and his age was given as 12 which seems to be slightly wrong.  His mother, Kezia and his father (now called Henry rather than Enoch), were living a few households down the road with the rest of the family.  Henry (or Enoch) and the eldest son, Samuel, aged 17, were carpenters.

In the September quarter 1889 Charles married Julia Philips, the daughter of Mark Phillips, a labourer.  The wedding took place in Coalpit Heath where Julia was living at the time.  They may have moved straight to St John Street after their marriage as their daughter Dorothy Alice was baptised at St Mary’s Church on 3rd August 1890.  By this time Charles was a butcher. Charles was living in 9 St John Street in the rate book of 1890 and the 1891 Census.  When they appeared in the 1891 Census Charles Henry was aged 23 and Julia was 29.  Their daughter, Dorothy, was 9 months old.

We do not know how long they stayed at St John Street, but Charles is shown in Castle Street in the 1896 Voter’s List.  It is interesting to note that when Charles Trayhurn started at the National School in 1897, Charles Parsons of Castle Street was shown as his guardian.  This implies a strong link between Charles who is a butcher and the Trayhurns who had the butcher’s shop on the corner of St John Street and The Plain.  Presumably Charles worked there.  Florence Parsons, Charles’ second daughter, who was born August 5th 1893, started school at the National School in the same year.  Herbert the youngest, born 13 September 1895, started school in 1899.

Charles and Julia were shown in 26 Castle Street in the 1901 census.  By this time Charles, aged 33, and Julia, aged 40, had four children; Dorothy, now 10 years, Charles Edward aged 9, Florence aged 7 and Herbert aged 5.  All the children were born in Thornbury.

When Dorothy Alice Parsons was admitted to Thornbury Grammar School on 21st June 1906, the address of the family was still Castle Street.  Dorothy was a very bright girl and combined her studies at Thornbury Grammar School with being a monitress at Thornbury Church of England School (now St Mary’s C of E VC Primary School).  She left school finally in December 1909 to be an uncertificated teacher at the Church of England School.

Charles and Julia continued to live in the house until about 1910.   The rate book of that year shows that the name Parsons is struck through, which seems to indicate that they left during that year.  The 1911 census shows that they had moved to 8 High Street.  Charles was trading as a butcher there with his brother, William.  They had taken over the business from the Ogborns.  The census shows William was aged 32 and unmarried.  All four children were living with Charles and Julia, and except for Florence, who was a dressmaker’s assistant, they were all helping in the butchery business. 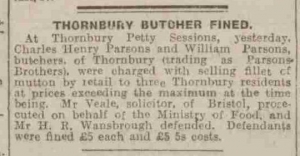 In 1916 whilst making an application for exemption of one of their employees (Thomas Nelmes) from military service, Charles said he and his brother farmed about 34 acres of pasture land grazing about 30 sheep, 12 cattle and 12 pigs in addition to running the butchery business.  The Western Daily Press of 4th December 1919 reported that Charles Henry and William Parsons had been charged for selling fillet of mutton at prices exceeding the maximum price chargeable at that time.  They were each fined five pounds with five guineas costs.

On 31st December 1920 Charles Henry Parsons bought 8 High Street and adjoining land from Flora Maclaine Jenner-Fust for £4,900.  It contained the house, shop and outbuildings (Plot 53 on 1840 tithe Map), the adjoining plot which surrounded the Register Office (Plot 52 on the Tithe Map, a plot of land called the Home Field (Plot 341 on the Tithe Map). All together the land contained 26 acres 3 roods and 5 perches.

Charles and Julia’s son, Charles Edward, died on 27th February 1930.  He was aged 37 and had been assisting his father in the butcher’s business.  The report of his death in the Western Daily Press of 4th March 1930 said that the hardships he had suffered during the war caused his long illness and death.  Several ex-servicemen attended the funeral and the British Legion were represented.

Soon afterwards, Julia Parsons died on 11th April 1931 and was buried in Thornbury Cemetery.  Charles died on June 9th 1933.  In his will dated 1932 Charles left the property to his daughter, Dorothy Alice.  The property at this time covered 32 acres, 1 rood and 8 perches.