John Evomy Phelps was born in Dorchester on 23rd March 1855.  He was the son of John Phelps, a grocer and candle maker and his wife, Mary (nee Kerley) who in 1861 lived in Pease Lane, Dorchester.  By 1871 the family had moved to North Square, Dorchester and John had started work as an apprentice surgeon.

In 1876 John married Alice Mary Spicer in Yeovil.  Alice was born in Wareham in 1855.  She was the daughter of James Spicer and his wife, Elizabeth Baker Spicer (nee Duffall).  James was a china and glass dealer of High West Street, Wareham. 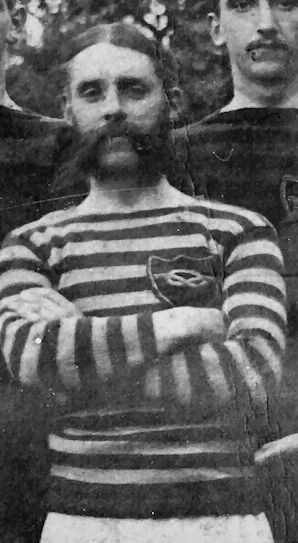 By 1880, John and the family moved to Thornbury.  The 1880 Rate Book and 1881 census shows that their first home was at 8 Gloucester Road.  John had become a Medical Assistant and he and Alice had another daughter, Mabel Frances was born in early 1881 and baptised in Thornbury on 14th March 1881.  She was aged one month at the time of the 1881 Census.  Their older three children were living with their grandparents in Dorchester.

They had two more children – John baptised in Thornbury on 6th October 1882 and Elizabeth Baker Phelps who was born in Dorchester in 1884.

We know that John Evomy Phelps was a sportsman as well as a medical man.   His sport seems to have been Rugby Union.  We understand that John was playing rugby for Fishponds in 1879/80, presumably whilst still living in North East Bristol.  In a report of one match ‘three-quarter J. E. Phelps kicked a goal for the home side’.

There are several newspaper reports of John playing matches for Thornbury.  One shows him playing against the Clifton Wanderers in January 1882.  A newspaper report of 27th April 1882 mentions that there was a meeting of the football club at the Swan Hotel.  In this instance we know that “football” refers to rugby.  Amongst the members of the club present that evening was the captain of the team, J. E Phelps.  We suspect John was responsible for setting up the club in Thornbury following his move from Fishponds.  He was certainly their star player regularly mentioned in the reports as scoring or playing well.  The rugby club struggled to keep going though lack of players and was finally wound up in 1886.  Several of the members of that club later played a part in the creation of the Thornbury football club playing association football.  John wasn’t mentioned in connection with the new club so he either gave up his sporting activities or moved to play for another rugby club.  The photo on the left is thought to be of John when playing for Thornbury.

John Evomy was also a secretary of the Athletics Club in 1883.  The club was set up that year “to provide healthy amusement for young men.”  The club met at the Castle Coffee Tavern in the winter and a field near the Castle in summer.

John seem to move around a lot in his early days in Thornbury.  The 1885 Rate Book shows him renting a house from Edward Wise.  This house later became known as 81 High Street.  By 1887 he was renting a house from George Butler, which later became known as 55 High Street.  He was living there in the 1891 Census and 1894 Rate Book.  The 1897 Kelly’s Directory shows him living in the High Street and working as a surgeon’s assistant and deputy registrar of births and deaths.  In the 1901 Census, he was living at 62 High Street and he was still living there in the 1926 Rate Book.

The 1911 Census shows that their daughter, now Mabel Frances Taylor, was now living with them with her son, Vivian Cecil Jack Taylor aged one.  Another grandson, Albert James Pridham was also there aged 7.

In 1899 John Evomy Phelps stood for election to the local council.  He failed to be elected.  The Bristol Mercury of March 8th explained that the election was a controversial one.  There had been a campaign to elect only those prospective councillors who would lift the ban on intoxicating liquor and tobacco in the Cossham Hall.  This ban had been imposed by Handel Cossham when he first presented the hall to Thornbury.  The Temperance Movement was strong in Thornbury and was led by Stafford Howard who came out top in the election.  We don’t know what side John was on but his football club met in the Castle Coffee Tavern owned by Stafford Howard so we suspect he was in favour of continuing the ban.

John Phelps was the official non–clinical assistant to Dr. E. M. Grace who spent many hours playing cricket.  It is said that Dr Grace’s priority was cricket and he often left John Phelps to make house calls and to deliver babies.  When a new practitioner arrived in town, he complained about this unprofessional practice.  The story goes that John Evomy Phelps started medical school at London University but due to lack of funding never qualified as a medic but was known locally as Dr. Phelps.  Dr. E. M. Grace left £50 in his will to John.

We have been told that the photo on the right is one of John, but a member of the family has expressed some doubt about this.  We would love to hear from anyone who can give us more information.

Alice died on 14th December 1925 aged 70.  The report of her death in the Gazette of 19th December 1925 said that she had died after a few weeks’ illness.  It also said “of a somewhat retiring disposition, Mrs Phelps was held in the highest respect by everyone.”

The book “Tytherington in the Past” says that John Phelps also lived at Meadow View for a time.

We understand that John married for a second time in 1927 when he would have been about 75 – this time to a Maud Mary Dixon who had been living at ‘Meadow View’, Itchington.  Maud was a widow and her maiden name was Pollicutt.  She was born on 7th March 1879.  She had married Alfred Dixon who had died in 1924.

The Electoral Registers in 1930 show that John and Maud lived for a short time at ‘Severn View’ in Morton and this is confirmed by an entry in Pitcher’s accounts books.  The 1931 Electoral Register shows merely that they lived in the High Street.  We have been told that they lived in the house which became known as 79 High Street.  By 1935 they had moved to 34 Gloucester Road, the house previously occupied by Frank Kelson Howell, the monumental mason.

John died in 1940 aged 87 and he is buried in Thornbury Cemetery.  The gravestone inscription on his grave acknowledges the ‘over fifty years practised as a true friend surgeon physician‘.  Maud died in Weston Super Mare in 1970 aged 93.