Robert Phelps and his family

We are grateful to Richard Charles Sidwell for providing us with much of the information we have here about Robert Phelps and family. He also loaned us a wonderful collection of photographs, some of which are on this page, but more can be seen on our photo web album.  Click here to view this album

Robert Phelps was born in Morton on the outskirts of Thornbury on 19th October 1845 and baptised on 30th November 1845.  He was the son of William Phelps and his wife, Sophia (nee Mills).  The 1861 census shows Robert was working as a cowman aged 15 on the farm of Robert Screen on the Kington Road.

Robert and Eliza had four children: Beatrice Adelaide born in Thornbury on 7th January 1870, William James born in Cromhall on 16th April 1872, Charles Phelps born in Cromhall on 3rd May 1874 and Mabel Eliza born in Thornbury on 13th April 1884.  When Beatrice was baptised on 3rd April 1870 at St Mary’s Church in Thornbury their address was Kington and Robert was said to be a groom.  The 1871 census shows Robert was a groom living at Churnsmead Farm, Kington.  He was still a groom when Charles was baptised, but had now moved to Cromhall.

The Morris Trade Directory shows he had moved back to live in Thornbury High Street by 1877 and that he was now trading as a Draper, Glass and Earthenware Dealer.  The 1876 Rate Book indicates that Robert was in the property now known as 1 High Street which he was renting from John Williams junior.  The 1881 census shows that the family were occupying two units in the High Street which we suspect means that they were living at what later became numbers 1 and 3 High Street.  Robert Phelps was a barber and grocer aged 35 and his wife, Eliza was 32 years old.  Eliza’s father, James Smith aged 76 and born in Griggleston in Wiltshire also lived with the family.  They had one servant.  An incident involving ‘Mrs Phelps of Thornbury’ was reported in the Bristol Mercury on 3rd June 1883.  It noted that ‘Mrs Phelps had had a narrow escape from the explosion of benzoline.  Some of this explosive liquid had been brought into the house unknown to her and, by some means, got spilled near the oven.  On going to the oven and striking a match the benzoline exploded and hurled her across the room against the wall, her face, hair and hands being badly singed’.  We can’t be sure that this story relates to Eliza Phelps or another Mrs Phelps.

The Bristol Mercury of July 24th 1886 shows that the family had financial problems.  An announcement in that paper said that Robert Phelps of the High Street a baker and grocer was to have a first bankruptcy meeting on August 20th at the Guildhall in Bristol.  We feel that the word “baker” may have been a misprint as Robert seems to have been a barber.

On 24th June 1889 Eliza Phelps died.  The 1891 census shows that the widowed Robert Phelps was a hairdresser still living at 1 High Street.  Living with him were Beatrice, working in a drapery, Charles, an apprentice tailor and young Mabel.

On 12th December 1898 Robert married again.  His second wife was Emma Bartlett, the daughter of Nathaniel Bartlett and his wife, Rhoda (nee Ball).

Robert was still at 1 High Street at the time of his death.  He died on 13th December 1899 aged 54.  The announcement of his death in the Bristol Mercury says that his sons, Charles Phelps and William James Phelps (then of Horsham), his brother in law, William Cole of Bristol and his nephews, John Blizzard and Alfred Phelps were at the funeral.  Robert’s burial service was held at the Wesleyan Chapel.

In the 1901 census Robert’s widow Emma Phelps was running the family business of hairdressing and tobacconist.  She was 54 and was living with her step-daughters Beatrice aged 31 and Mabel aged 16 both of whom were dressmakers.

Emma Phelps died on 3rd February 1907 aged 56 and was buried with Robert Phelps in Thornbury Cemetery. 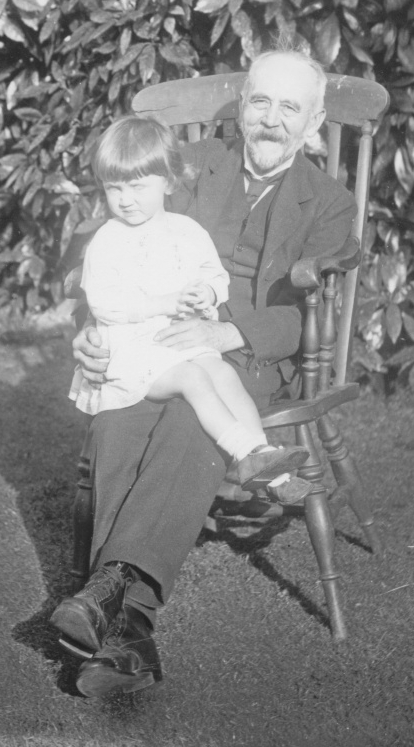 Charles – is shown in the photograph on the left.  The 1891 census shows Charles was a tailor’s apprentice living with his widowed father at 1 High Street.   On 13th October 1895 Charles married Mary White in Holy Trinity Church, Bristol.  Mary was born in Westerleigh on 17th June 1862 and thus was about 8 years older than Charles.  The records of the Council School suggest that Charles and Mary had two children, Reginald Cyril born on 26th February 1896 and Stella Beatrice born on 3rd June 1898.

In the 1899 Rate Book Charles Phelps lived in 38 Castle Street.  The 1901 census shows that the tailor Charles Phelps then aged 26 was alone in the house, although he was married.  We don’t know where Charles’ wife, Mary and the children were at the time.

It is possible that after the death of his father Charles took over as a tobacconist in his father’s shop at 1 High Street.  Certainly after 1902 Charles’s name appears in the Trade Directories as a tobacconist.  The Rate Book of 1905 shows Charles’s step-mother, living at 1 High Street and Charles had moved to 34 Castle Street.  The 1910 Rate Book shows Charles had moved from 34 Castle Street to 15 The Plain.  This was presumably triggered by his step-mother’s death in 1907. 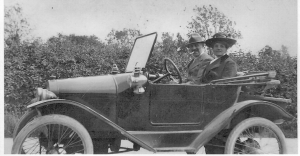 The 1911 census shows that Charles and Mary were living at what is now 15 The Plain.  Charles aged 36 had been married for 16 years to his wife Mary and that they had two children, Reginald aged 11 and Stella.  Charles was a tailor, tobacconist and hairdresser, while Mary helped in the tobacconist part of the business.  The 1911 South Gloucestershire Chronicle dated 3rd June shows how hard Charles was working at this point as an advertisement for the shop makes it clear that it is open from 8am to 9pm.  It also stresses that the “saloon ” has “modern appliances” and sells brilliantine and pomade as well as tobacco and cigars.  The business must have been very successful if their home and their car are indications of their success.  Please click on the thumbnail photograph on the right to see Charles and Ella Phelps in their car. 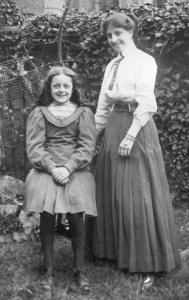 On 5th August 1914 Charles married for a second time.  His new wife was Ella Alpass, a spinster aged 46.  Charles’s occupation was described as a tailor.  Click here to read more about the Alpass family

The 1915 Prewett’s Directory shows Charles was living at the house known as ‘Clovelly’.  This house later became known as 1 Pullins Green.

The 1916 Prewett’s Directory shows Charles had moved to live in Gloucester Road.  Charles and Ella lived in Stevelands in Gloucester Road.  This house was built by Edmund Cullimore who was married to Ella’s cousin, Amy Elizabeth Alpass.  The house is one of a pair of villas and in the other house was Ella’s sister, Lily, who had married Frederick Bishop in the same year.

In 1924 when Charles’s son, Reginald Cyril, married Marjorie Savery, his address was Stevelands which indicates that he was living with his father and stepmother.  Charles’s daughter, Stella Beatrice Phelps, also married in 1924 and had also moved to Stevelands with her father and step-mother.

Charles Phelps died aged 61 at Stevelands and he was buried in Thornbury Cemetery on 24th April 1935.  He had retired by the time of his death.  His obituary printed in the Western Daily Press on 23rd April 1935 says Charles had carried out the duties of correspondent of the Thornbury Council Schools and was a member of the Parochial Church Council and Thornbury Bowling Club.  Ella died in April 1938 aged 72.  She was buried in one of the Alpass graves at Berkeley Cemetery.  Her obituary mentions she was heavily involved with the Girls’ Friendly Society, was a member of the Mothers Union and the Thornbury Nursing Association.  Following their deaths, Annie Laura and Hilton, other members of the Alpass family, continued living at Stevelands for a few years.

Reginald Cyril – Reg joined the Army in 1914.  He appears to have enlisted in the RAMC, but he suffered an injury to his right knee in August 1914 whilst on active service.  We understand from his family that he drove an ambulance for the Church Army in Flanders during World War One.  He continued in the service and in 1919 his military records appear to show he was transferred to the Air Force Reserve.

Reg was an insurance inspector when he married Marjorie Olive Savery on 5th June 1924.  Olive was born in 1899, the daughter of Edwin William and Emily Savery who lived at Sheffield House, 13 The Plain.  Reginald and Olive settled to live at 3 Cranbrook Road, Redland.  Sadly the marriage lasted little more than a year as Olive died aged only 26.  She died at 24 West Mall, Clifton, but she was buried in Thornbury Cemetery on 4th July 1925.  Olive’s obituary in the Western Daily Press spoke of her bright disposition and her many friends.  Her funeral at St Mary’s Church left from her parents’ home at Sheffield House.  The wreathes included one from Thornbury Tennis Club and the Carnarvon (Bristol) Tennis Club.

In 1927 Reginald married again.  His second wife was Mary Monica Crook (who was known in the family by the name of ‘Aunt Dan’).  In 1939 Reginald was a Police Special Constable in Westbury.  He died in 1944 aged 48 whilst driving a police car in Bristol.  His name is on the Avon and Somerset section of the Police Roll of Honour.  “SC Reginald Cyril Phelps. Died June 1944, aged 48.  Collapsed and died at the wheel of a police car which then crashed.”

Stella Beatrice – she attended the National School (now St Marys) and in September 1912 she was appointed monitoress working for the Cambridge Junior Exam.  The school’s log book notes that in June 1913 she was knocked off her bike by a dog and she was off school for a few days.  In September 1913 she was made a pupil teacher. 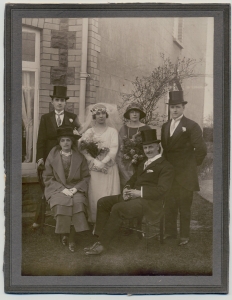 Stella married Frederick Charles Sidwell on 1st March 1924.  Click on the thumbnail on the right to view a photo of the family group at the wedding.  It shows Frederick, Stella, Frederick’s sister, A. L. Sidwelll and Stella’s brother, Reginald with Ella and Charles Phelps sitting in the chairs.

Frederick Charles had been born in Stratford, Essex on 28th April 1885, the son of Richard Frederick Sidwell and his wife, Ann Day (nee Pike).  By the 1901 census Frederick Charles had become a draper’s clerk in Bristol.  In 1902 he began working for Prescott Dimsdale Cave Tugwell and Co. Ltd.  At first he was a Junior at their Clifton Bank, but after 18 months, he became a cashier at Avonmouth and Shirehampton.  He also worked for two years at their Thornbury Bank on The Plain.  He was in Thornbury in 1913 and then spent nine months at Chippenham.

For two years from 1914 to 1916 Frederick Charles worked at Chipping Sodbury Bank and then following the outbreak of the First World War, he enlisted on 8th December 1915 in the Colston Hall, Bristol.  He joined the Gloucester Regiment on 22nd May 1916 at Chiseldon, Wiltshire.  He was transferred to the 94th Battalion Training Reserve in September 1916 and promoted to the rank of Corporal in December 1916.  He was invalided out in March 1917.

He worked from 1917 to 1919 as an accountant in Thornbury.  We have a photograph of Frederick which we believe shows him working in the bank at Thornbury.  Frederick Charles was working at Old Bank in Bristol from 1919.  After their marriage in 1924 Stella and the Sidwells settled to live at 10 Worcester Terrace, Clifton where they had two sons, Frederick John born in 1925 and Richard Charles born in 1928.  Frederick Charles died at Worcester Terrace in 1939 aged 53.  The family home was damaged during the blitz in the Second World War and they moved to Hinton Blewitt Manor, Temple Cloud.  Stella worked as a matron and later as a junior school teacher at Colchester House Preparatory School.  She died on 22nd may 1983 at Chinnor near Oxford.