William Alfred Phillips was born in June quarter 1861.  He was the son of John Phillips, a farm labour from Stone and his wife, Anna.  By 1881 he had got involved with ‘steam’.  He was a steam plough steersman on a farm in Alkerton, Eastington.  In the census, he was the only person listed in the household, and unusually given the status of ‘person in charge’.

William married Eliza Cole in Chepstow in September quarter 1883.  They had one child in Chepstow, Francis George, born on 13th September 1884.  The family then moved to Thornbury where William Henry was born on 11th April 1886, John Leonard born in September quarter 1888 and Fanny Elizabeth E. was born on Christmas Day 1889.  The 1891 census shows the family living at 2 Sawmill Lane, an old small cottage situated near the recently opened saw mill.  The family consisted of William, a stationary engine driver aged 29 from Thornbury, his wife, Eliza aged 29 from Newent and their children: George aged 6 born in Chepstow, Henry 4, John 2 and Fanny aged 1, all born in Thornbury.

In 1899 Rate Book shows the family had moved to 3 Horse Shoe Lane on the corner of Horseshoe Lane and Gillingstool.  The house was known as ‘The Old School House’.  In the 1901 census William was described as an engine driver – steam roller.  His son, ‘George’ was now an apprentice tinsmith aged 16 and Harry was a house decorator aged 14.  John and Fanny now had a little brother, Ernest aged 9, and sister, Beatrice aged 7.  They were still in 3 Horseshoe Lane at the time of the 1904 electoral register and 1905 Rate Book.

By 1907 the family had moved to a house described in the electoral register as being at ‘Streamleaze’.  This house later became known as 3 Upper Bath Road.  William’s wife, Eliza, died on 8th January 1908 aged 46 years.  He re-married in September quarter 1909, his wife was Elvere Adelaide Crowe.  Elvere was born in West Somerton in the area of Flegg, Norfolk in 1872, the daughter of Richard T Green, an agricultural labourer and his wife, Emma M.  In 1891 the Green family were living in Carlton Colville in Norfolk.  In 1898 Elvere married Richard Knights Crowe in the Norwich area and they had at least one child, Ella Millicent born on 19th October 1901.  Following Richard’s death, Elvere moved to Thornbury where she married William Alfred Phillips.  Her daughter, Ella Crowe started at the Council School in 1909 and then was awarded a free place for 3 years at the Grammar School.  She started there on 16th September 1913 and left on 27th July 1917 when she started working as an apprentice to a draper.

We think that William and Elvere had at least one son, Herbert Wallace was born in 1910.  Although Herbert doesn’t appear to be living with William and Elvere in the 1911 census he is listed with his mother in the 1935 and 1938 electoral registers.  In the 1911 census their children were Harry, a house painter aged 23, Beatrice M a dressmaker’s apprentice aged 17 and step-daughter, Ella M. Crowe aged 9. 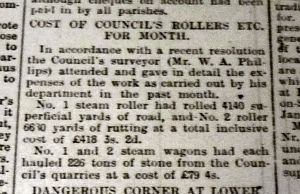 We have a copy of a newspaper report for November 1915 showing that during the Great War William was sent to the Isle of Wight on Government work.  The report refers to the fact that William had been getting 30 shillings a week for his work with the Council.  The 1916 Prewetts Almanack lists William as the Captain of the Thornbury Fire Brigade as well as being the Market Toll Collector.

William and Elvere continued to live at 3 Upper Bath Road until William died on December 30th 1925 aged 64 years.  The newspaper obits make it clear that William had been promoted from an ordinary steam roller driver and since 1918 had been undertaking the respected role of Highway Surveyor for the whole of the Thornbury District.  Miss Higgins had a funeral card which shows he was interred in Thornbury Cemetery.

Elvere Adelaide carried on living in the house until about May 1947.  A notice of sale of household effects appeared in the Gazette at that time indicating that she was leaving after 40 years occupation.  At that time she exchanged houses with John and Mollie Elizabeth Blenkinsopp who had been living at 61 High Street.  Mollie Elizabeth was the daughter of Elvere’s step-son, Francis George Phillips, and his wife, Fanny.

Elvere died on December 18th 1948 aged 76 years.  She is buried in the same grave as William in Thornbury Cemetery. William Henry became known as ‘Harry’.  He enjoyed playing the cornet and whilst at the Grammar School he regularly played the Last Post at the annual Remembrance Day service.  Harry was a painter and decorator and in 1920 he married Bertha Stone, the daughter of George and Eliza Stone.  George was a deacon and elder of Thornbury Baptist Church and Bertha was the organist and Harry, the choirmaster there.  Harry and Bertha had one daughter, Rachel born in 1921.  Rachel married Harry E Aplin, the electrical contractor in 1942.  The photo on the right shows the two of them outside number 3 Upper Bath Road, although they lived at 63 High Street.  This house had the unusual name ‘Gilgandra’ – which might suggest there was some connection to the place by that name in Australia.  Harry and Bertha were shown as still living at 63 High Street in 1958.  Harry died on 5th June 1963 aged 77 years.  Bertha died on 6th July 1986 aged 95.

Francis George known by his middle name ‘George’.  George married Fanny Elizabeth Millard in 1910.  She was born on 22nd September 1886, the daughter of John Millard and his wife, Elizabeth.  In 1891 the family were living at West End, Oldbury and John was working as a brickyard labourer.

A report in the Gazette dated 2nd November 1907  shows that George had been working for the District Council on the steam engine roller ‘for some time past’ and he was being offered the position of second driver.

George and Fanny had a daughter, Mollie Elizabeth born in 1913 and a son, John William born in 1916.  We know that George and Fanny lived in 62 High Street.  However we believe that they first lived in 64 High Street.  They were listed as living in the High Street in the 1914, 1915 and 1916 Prewett’s Street Directory.  They were also living there in the 1918 electoral register and in 1919 when Mollie started at the Council Upper School.  The 1926 Rate Book shows George living in 64 High Street with John Evomy Phelps living next door at 62 High Street.  The Phillips family moved next door when John Evomy Phelps moved away from there in 1926.

George took over the job of steamroller driver from his father.  A 1915 newspaper report shows that George had worked on the roller with his father for 12 years.  When his father was sent to the Isle of Wight on government business during the War, George took over as driver.  The Council had some discussion with regard to his pay and decided they did not want to lose him and awarded him the same pay as his father had been getting – 30 shillings per week.

We were told George used to park the vehicle outside number 3 Upper Bath Road.  Many years later Mollie recalled childhood of how she used to meet her father at the end of the day to gain a ride on the roller’s coal box.  He was appointed Trustee of the Methodist Church in 1925 and reappointed in 1948. 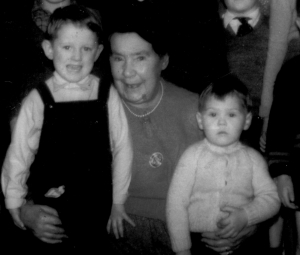 In December 1928 the Gazette had an article about the sad death of John William Phillips aged only 12 years.  He had been ill for some weeks and a few days prior to his death he had undergone treatment in the Bristol Royal Infirmary.  He came home from hospital but suffered a relapse and died.  The article said that he was a popular boy at Thornbury Grammar School and that his loss was felt greatly in the town.  The blinds were drawn when the funeral procession made its way to the Wesleyan Church (in the High street) on 10th December 1928 and thence to the cemetery.  The mourners included his parents and sister Mollie, his uncles and aunts (Mr and Mrs W H Phillips, Mr and Mrs L J Phillips and Mr Millard) and his grandmother Mrs Phillips.

We have been told by several people that Fanny was famous for her ‘Oldbury tarts’ and that in season she used to make about 200 of these each day which were sold privately from the house.  George Phillips died in 1960 aged 75 years and his wife, Fanny (who had been appointed a Trustee in 1948) was re-appointed Trustee of the Methodist Church in 1968.  Fanny moved to live in a flat at Streamleaze and she died on 22nd October 1975 aged 89 years.  Click here to read more about Mollie and her husband, John Blenkinsopp