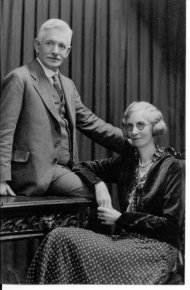 Arthur Charles Pitcher was the son of Walter William Pitcher and his wife Anna Maria (nee Williams).  He was born on April 2nd 1876.  He seems to have used the name Charles or Charlie in preference to Arthur.  In the 1881 census he was aged 5 living in the family home at 12 Gloucester Road.  In 1888 he failed to gain a scholarship for admission to Thornbury Grammar School, but he was successful the following year and was admitted on 14th January 1889.  By 1901 Charlie was a coach-builder and carpenter in his father’s firm now based at their house at 24 Gloucester Road.

In 1903, Charles married Annie Symes, the daughter of Charles Symes who ran the seed shop business on The Plain. (Note: Charles’ brother, Augustus Ernest also married an Annie Symes, this one the daughter of Bernard Symes, the tailor in the High Street.  The Annie’s were first cousins.  Charles and Annie had three children: Christopher Walter on 27th October 1906, Arthur Bernard born on 12th October 1909 and Gerald Charles in 1917).  At least two of the boys, Christopher and Arthur went to the Grammar School like their father.  The school records show that Christopher left on 18th October 1922 to take technical classes in relation to electrical engineering.

We have two albums of photographs of the Pitcher and the Symes families.

The 1905 rate book shows Charles was living in the house which he was renting at 7 Pullins Green.  He didn’t stay there long, by 1910 rate book he had moved to the High Street.

Charlie changed careers after he was taken ill and needed a lighter job.  He applied for, and got, the position of sub-postmaster at a salary of £165.  The earliest record of him being at the Post Office is the Prewett’s Almanack of 1909.  The directories show he supplemented his income running a stationers shop and the 1939 trade directory suggest he is also running the Library.  Charlie carried on being sub-postmaster for 47 years!  The Post Office was then located at 28 High Street, in what is known locally as ‘Pye Corner’.

During the Second World War Charlie was a member of the Auxiliary Fire Service and an ARP Warden.

Charles had many other activities.  He was interested in music and was a member of the Thornbury Gleemen.  As a town councillor for almost 20 years, he became mayor in 1916/17.  He was deeply involved in the ‘Battle of the Pump’ where he fought hard for the retention of the Pump in middle of The Plain.  He was a keen bowls players and Secretary of Thornbury and District Men’s Club, Thornbury Town Social club and Thornbury Town Football Club.  Apparently it was very dangerous to stand near Arthur when ‘the Town’ were playing as his legs tended to fly out in all directions.  He was also interested in local history being an active member of The Society of Thornbury Folk and their chairman for several years.

Annie died aged 61.  She was buried in Thornbury Cemetery on 3rd February 1943.  There was a sad obituary in the Gazette which referred to the “years of suffering” that she endured.  It adds that ‘her illness had prevented her from taking any part in the public life of the town’.  Their three sons were bearers at her funeral.  At that time, Chris Pitcher was a Sub-Lieutenant, Arthur Bernard was in the Royal Naval Reserve and Gerald was a Lieutenant in the Royal Artillery.

Charlie married again in Brentford in the September quarter of 1944.  His new wife was Jessie Blanche Davies, the daughter of Charles Henry Davies who had been a a sergeant at the police station in Thornbury High Street at the time of the 1901 census.  Jessie was a pupil teacher at the time of this census and she went on to become a teacher in the Council School.  The Electoral Rolls show that Jessie lived with her parents in Gloucester Road (now number 17).

We understand she had been assisting Charles in the Post Office.  John Nicholls who was the son of the headmaster of the Council School recalls Jessie Davies, who taught the reception class.  He said she was “pleasantly plump and almost always smiling”.

Charles died in July 1960 and is buried with Annie and sons, Christopher (who died aged 62 in Bingley, Yorkshire in July 1969) and Arthur at Thornbury Cemetery.   Jessie continued living in Pye Corner until at least 1965.  She died in December 1967 aged 81.