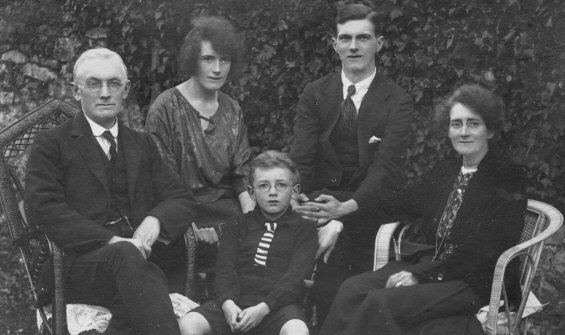 Edgar, the oldest child of Walter William and Anna Maria Pitcher, was born in Thornbury on 6th December 1867.  Edgar  Pitcher worked as a solicitor’s clerk.

We have a collection of photographs of the Pitcher family.  Click here to see the album

In 1888 the Bristol Mercury had a report on the meeting of the Congregational Mutual Improvement Society.  Edgar gave a talk on “printing and steam and their relationship to the advancement of mankind in which he reviewed the steady development of printing and steam power from its discovery until the present time. ”

He married Caroline Staley on 12th August 1897 in what is now the United Reformed Church in Thornbury.  Caroline was born in 1873 and baptised 9th November 1873.  She was the daughter of Robert and Sarah Staley of Park Mill Farm.  Edgar and Caroline had two children, Ivy Ruth Pitcher born on 22nd February 1899 and Donald Edgar Pitcher born on 22nd February 1914.  Edgar and Caroline are shown in the photograph above which was taken in 1922.  It also shows their small son Don in spectacles and their daughter who was known as Ruth.  We believe that it is likely the young man was Ruth’s then fiancée and later husband, Wilfred Edmonds.

In 1899 the estate of John Crowther Gwynn was put up for sale. This included number 3 Castle Street, which was already the home of Edgar and Caroline Pitcher.  Lot two of the Crowther Gwynn sale was described as “a house and garden in the occupation of E Pitcher as yearly tenant at a rent of £15 per annum and land tax of 3s 6d. Borough rent 8d. It has front and back sitting rooms, kitchen, back kitchen, pantry, cellar and 4 bedrooms.”

The 1901 census tells us that Edgar and Caroline Pitcher were living in this house and that at that time Edgar was 33 years old and a solicitor’s clerk.  His wife Caroline was 27.  They had a daughter Ivy aged 2.

We have found the school record of Ruth Ivy Pitcher.  She was born 22nd February 1899 and attended a private preparatory school before her admittance to Thornbury Grammar school on 16th September 1909.  The record shows that she left Thornbury Grammar School in April 1915.  The notes on the record show that she left without notice to attend Clarke’s College in Ealing.  Ruth married Wilfred J. Edmonds in Thornbury in June 1923.

The rate books of 1905 and 1910 show that the owner and occupier of 3 Castle Street was Edgar Walter Pitcher.  The 1911 census shows that Edgar was a “law clerk” then aged 43.  At this time he and Caroline had been married 13 years and their daughter, and only child, Ivy was 12.

On the 10th November 1914 Edgar Pitcher bought land to extend his garden from the trustees of the will of H C St John deceased.  The land in question was plot number 37 on the Tithe Map and stretched from Latteridge lane down behind the row of house to the land owned by Porch house.  It is interesting to note that when in 1916 when Edgar joined the Volunteer Battalion of the Gloucester Regiment (equivalent of Home Guard) and in the 1926 Prewetts Directory, the property was described as “Globe House.”

In March 1930 the Western Daily Press included a little report on a lecture on Beethoven and his work at the Thornbury Congregational Church.  It was presented by Donald Pitcher who was then only aged 16.  He accompanied his talk with illustrations on the organ.

Edgar’s wife, Caroline died in St Marys Hospital, Bristol aged 63.  The funeral was held at the Congregational Church in Thornbury and she was buried in Thornbury Cemetery on 17th November 1936.  The electoral register of 1938 shows that Edgar moved back to Gloucester Road after the death of his wife.  The register compiled in 1939 as preparation for the war shows he moved to live with his brother at the family house 24 Gloucester Road.  However the report of his death in the Western Daily Press dated 1st March 1944 shows he died at 29 Gloucester Road.  After Edgar moved away from Number 3 Castle Street that house became the home of his brother Augustus Ernest and Annie Pitcher.

The funeral report of Edgar Walter Pitcher in the Dursley Gazette says that he died suddenly on Tuesday, February 29th 1944 aged 76.  It mentions that he was employed by Crossman and Co for 62 years.  The organist at the funeral was his son, Donald Pitcher.  His daughter, by now Mrs W. J Edmunds, was at the funeral with her husband.  There is a more surprising piece of information towards the end of this article.  It seems that Mr Pitcher was engaged to be married to Miss G. Boyt and was to have been married very shortly.  We are not sure who Miss Boyt was, but she is likely to have been Gwenneth Boyt the daughter of Edwin Boyt of Crossways.  Edgar’s parents taught at what seems to be a Sunday School in Crossways so perhaps the families knew each other from those times.  Gwenneth Boyt is the only “G Boyt” in the electoral roll at that time.

See the other children of Walter William Pitcher