Elwyn Pitcher and his wife Eva

builder and funeral director of Thornbury 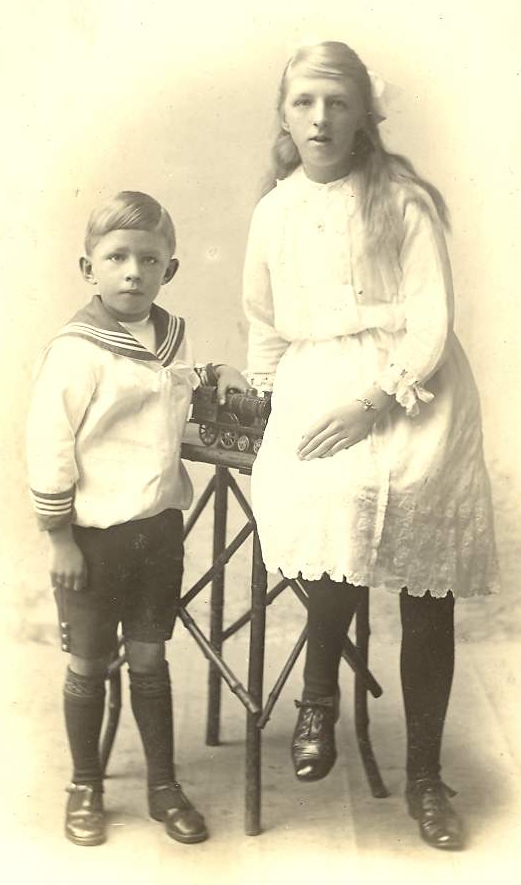 Elwyn Pitcher was born on 22nd July 1911, the son of Leonard and Ellen Pitcher.  The photograph above shows Elwyn with his sister Helen.  As the only son, he took over his father’s building and undertaking business.

We have photographs of the Pitcher family.  Click here to see the album

Elwyn was educated in a private preparatory school and on 13th September 1921 he was admitted to Thornbury Grammar School.  He married to Eva Lanfear in the Congregational Church at Thornbury on 6th July 1942.  At the time of his marriage he was Staff Sergeant in the Royal Engineers.  Eva was the daughter of George Lanfear and his wife Annie (nee Webb) of Bristol.  The 1911 Census shows George was a butchers shop manager who was living in Upper Eastville, Bristol but he had born in the Oldbury and Thornbury area.

Elwyn and Eva lived in number 24 Gloucester Road with Leonard.  Later in the early 1960s, Elwyn’s sister, Helen moved back to live with them.  The house was big enough to be divided into two households and although the two ladies had to share the kitchen, Helen always had her own rooms downstairs as well as a bedroom upstairs.

We only got to know the family late in their lives.  By that time, Eva Pitcher was coming to the end of her career as hospital almoner and was spending more time at the bowls club at the new Leisure Centre.  Helen, who had been a teacher at the Council School, maintained an interest in history and showed slides of old Thornbury to schools and organisations.

The Pitchers never saw the need to change things that worked well for them.  We were told that the grey roller blinds that were at every window for the twenty years that we knew them were black-out curtains from the Second World War.  Certainly, it doesn’t seem impossible as they seem to preserve everything else that could be of use.  Mrs Pitcher also said Elwyn’s father’s tools were still kept on the bench that he had used.  When he officially retired in 1986, there were no more generations of Pitchers to take on the business and the funeral side was taken over by Leslie Gulwell who had worked there for 35 years.  Elwyn kept his interest in the building industry and when Shipp’s garage was pulled down and work began on the new flats, Elwyn could be seen most days inspecting the progress.  He was not impressed by new building methods or the size of modern rooms.

Jeff Bowen told us a story about Elwyn. Elwyn said that he and Leonard his father went to collect a body from a cottage up near the rugby club.  It was a dark and stormy evening and they were bringing it back on a bier – a sort of hand drawn cart.  When they finally trudged back to Gloucester Road they realised that the bier was empty.  At some point the coffin had slid off!  They had to go out early next morning to retrieve it!  We can’t be sure how true this story is.  Elwyn had a very dry sense of humour, and it wasn’t always easy to tell when he was teasing.

Another story that Jeff reminded us of is that Elwyn was in Palestine during the 1940s.  Elwyn asked us about our travels and having found that we went to Jerusalem, he said that he had been in the King David Hotel when there was a bomb blast.  He still had the scar on his face.  He was left in a tent for several days as no-one expected him to live.  He expressed very strong views about the Israelis when we brought up the subject 40 years later.  The Gazette of 3rd February 1945 announced that Staff Sergeant Elwyn Pitcher of the Royal Engineers had returned to England from Palestine and was now in hospital still recovering from the very severe injuries he had suffered there,