The Pitman family lived in Laburnum House in Gloucester Road in the 1920s.

George was born in Stillhouse Lane, Bedminster on 13th May 1875.  He was the son of George Pitman and his wife, Amelia (nee Handoll) who had married in 1871.  In the 1881 Census the family were living at 27 Hope Square, Bedminster.  George snr was an engine driver born in Dorset.  We have been told that George Pitman was educated at St Mary Redcliffe School in Bristol.

The 1891 Census shows George had moved to London and was living at 24 Meadow Place, Lambeth.  He was an apprentice brass finisher living with Henry Handoll, a foreman brass finisher and his wife Eliza.  George was described as their nephew, but we suspect he was Henry’s half brother.  George’s army service record (see below) shows he was an apprentice for seven years expiring in 1894.

On 31st July 1898 George married Kate Hardy in St Albans Church, Fulham.  Henry and Eliza Handoll were witnesses at the wedding.  At the time of the wedding George was an engineer living at 84 Margravine Garden, Fulham and Kate was living at 52 Biscay Road in Fulham. 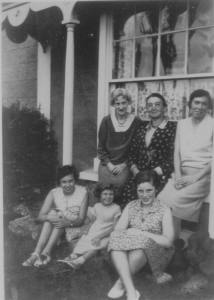 Kate was born in Fulham in 1872.  She was the daughter of William Hardy, a cab proprietor and his wife, Sarah.  At the time of the 1881 Census the family lived at 2 Felgate Mews.  William was a cabman.   He and Sarah had six children of their own including Kate, then aged 9, and one stepson, Albert Timms.  The 1891 Census shows Kate had starting working in service.  She was a general servant aged 18 living in Fulham Park Gardens. Meanwhile, Kate’s parents were living at 18 Calvin Street, Hammersmith.  William was still a cab driver . They had had two more children including Minnie who was then aged 9.

The 1911 Census shows George and Kate living in 3 rooms at 112 Vestry Road, Camberwell.  George was an engine turner and fitter in a coach building firm.  He was aged 36 and Kate was aged 37. George Pitman with Minnie and their family

They were living there with their two surviving daughters: Minnie aged 9 and Isabel aged 6.

The army service and pension records available on Ancestry website show that George enlisted in London in September 1914 at the age of 39.  He was judged fit and enlisted into the Army Service Corps.  The documents show that he was a motor driver, 5ft 3 3/4 inches in height, 126 lbs, chest 36 1/2 inches, fresh complexion, brown eyes and ‘black hair turning grey’.  He had a scar under his left nipple.  His address was still 112 Vestry Road, Camberwell.  Unfortunately (or perhaps fortunately) George was discharged as unfit and ‘not likely to become an efficient soldier’ in October 1914.  It was noted that he had ‘old endocarditis, heart not compensated’. 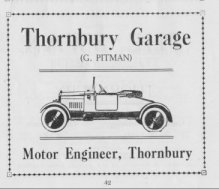 At the time of her death, they were still living in Camberwell.  George returned to this area to live and work in Alveston.  He lived near The Square in Alveston.  He was a motor engineer and seems to have worked at a garage which is now Berkeley Vale Motors .  On 31st March 1918 George married Kate’s sister, Minnie in Alveston Church.  Minnie was a widow having been married to Arthur George Pegg in 1907.  Tragically he had died the same year aged 28.  George and Minnie had a daughter of their own, Lily Kathleen born on 17th June 1921.

George set up his own business as a motor engineer in the large workshop building adjoining number 6 Gloucester Road in Thornbury.  He appeared in the Trade Directory in 1923 under the name of ‘Thornbury Garage’.   George and Minnie Pitman appear in the Electoral Registers for Gloucester Road from 1921 to 1925. 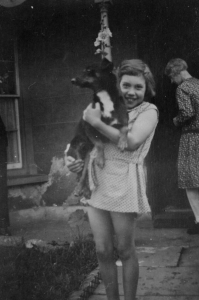 We believe that it is very likely that George and Minnie would have lived in number 6.  The house and adjoining workshop were both owned by the Hodges Estate and there were other times later when the two buildings were let to the same person.

We are not sure where George and Minnie moved to after leaving Gloucester Road. They are not listed in the 1925 Valuation List nor the 1926 Rate Book.  This probably means that they were lodging with another family.  Minnie is listed in Trade Directories as a dressmaker in St John Street in 1927 to 1935.

The school record referred to below shows that the family lived in St John Street in 1926 when Lily started school.  We have also seen a family bible which suggests they may have been living in the High Street in 1927 and this is confirmed by the 1927 Electoral Register which shows George and Minnie there.

When Lily moved to the Council Upper School in 1928 the family home was in Castle Street.  We have a copy of the reference given to her by Mr Nicholls when she left school to go to London.  It is dated 26th September 1934. It describes the young Lily as a “girl of more than average ability” and says “her moral character is irreproachable”. 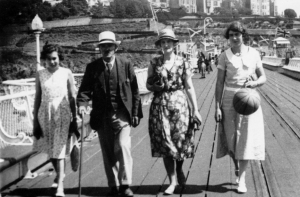 The photograph on the right shows Lily with her dog.  She appears to be standing outside 6 Gloucester Road.

The 1931 electoral register shows that George and Minnie were living in Gloucester Road, but again we are unable to identify which house they were living in.

George and Minnie moved back to London in 1934, where tragically Minnie was killed during the Blitz in 1940.  George returned to Bristol around 1950 where he married for a third time.  His new wife was Ada Caddy whom he married in Bristol in March qtr 1951.  He later moved to live with his daughter, Isabel Stephens, in Alveston where he died in 1952.