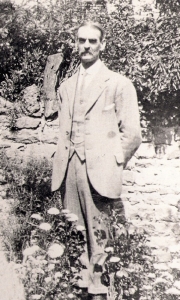 Frank Cullimore Poole became the leading photographer in Thornbury during the early 1900’s.  This was a time when most families didn’t have cameras of their own and they had to rely on professionals for photographs of their family and important occasions.  Frank’s work was carried on by his daughter, Dorothy, who became known as ‘Dolly’.  Although the Museum had many photographs taken by Frank or Dolly they didn’t have any of the family themselves.  We are particularly grateful to Mike Poole (a grandson of Frank Poole and the son of Alan George Poole) for sending us and the Museum several photographs of the family, some of which are displayed on this webpage.

Frank was born on 9th September 1871 and baptised on 5th November 1871.  He was the son of George Poole, and his wife, Ann (nee Cullimore). They had moved to Thornbury by 1866 when their daughter Minnie was baptised there.  George was a basket maker but by 1880 he had taken over as licensee of The Wheatsheaf and he continued there until 1884.

By the time of the 1891 census the family George was living next door to Wheatsheaf (the house that is now used by Thornbury Museum).  Frank was living there with his parents and had started working as a printer’s assistant.

We know from a photograph taken in June 1897 that Frank was a member of the Thornbury Society of Change Ringers.

The 1899, 1905 and 1907 rate books show that Frank Poole was then occupying 75 High Street, a property owned by Edward Wise.  The 1901 census describes Frank C Poole as a printer and photographer aged 28 born in Thornbury living with his wife, Catherine, aged 29 from Rudgeway and their children: Frank C aged 2 months and Dorothy K aged 3.

By the 1910 rate book Frank and his family moved from 75 High Street to 71 High Street, a property owned by William Oliver Chambers.  This became the family home for the next 60 or more years.  The photographic studio was in the room to the right of the front door and it was furnished with a chaise longue and a colourful stuffed parrot to amuse the infant clientèle.  To the left of the front door the Pooles had a little shop selling rolls of film and sweets.  According to the information printed on several photos, the studio was also located in Chapel Street at some time.

Click on the thumbnail image on the right to see a larger version of one of his advertisements.

Catherine (also known as Kate) died on 31st December 1934 after a long illness.  She was aged 64.  There is a brass plaque fixed to the choir stalls in St Mary’s Church which shows Frank was an enthusiastic member of the choir.  We understand that he also had a great interest in amateur radio. 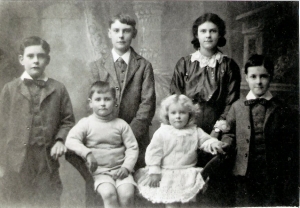 The special register compiled in 1939 in preparation for the war shows that Frank was living in house with Dorothy, Frank junior, Austin and Selina.  Frank senior was described as a gentleman’s gardener, Dorothy was a professional photographer, Frank junior was a road worker and Austin was a solicitor’s clerk.  From the notes we think that during the war Austin was a squad leader in the Decontamination Unit and Frank junior also worked in that unit.  Dorothy and Selina helped in the ARP canteen.

During World War II the Poole family had two children billeted on them for three years.  They were Arthur and John Heath from Harwich.  Local researcher, Tony Cherry contacted John Heath for information about their evacuation to Thornbury.  An account of their stay with Frank Poole and his family appears in Tony’s book “The History of a School” which is an account of the Gillingstool School (formerly Thornbury Council School).  From this book we learn that Selina (or “aunty Lena” as the boys called her) ran the household for her widowed father and it was her who selected John Heath from amongst the evacuee children then billeted at the Malt House.  Selina was told that she had to take his brother as well.  The children were very happy at the Poole’s home.  They were lucky that Dorothy as photographer was able to send frequent photos of the boys to their parents and that their father worked on the railway and was able to visit Thornbury as part of his job.  They seem to have been treated like members of the family as their clothes were made for them.  They became regular church goers like the rest of the family and were even members of the church choir.  “Uncle Frank” took them to the market with him.  On one memorable occasion it seems that a bull escaped.  “Aunty Lena” jumped to safety over a wall with John, but Arthur ran and unintentionally led the bull to the railway station!  They also went to work with “uncle Charlie” in the solicitors’ office where they put labels on used envelopes so they could be reused.

The thumbnail on the left shows a photograph of the six children.  Click on the thumbnail to see a larger image.

Basil – served in the Royal Navy from 1918 to 1921.  His naval record describes him as a sawyer’s assistant, 5ft 1 inch, 33 inch chest, brown hair, grey eyes and fresh complexion.  He served as a Boy 2nd Class on HMS Impregnable and Ganges II.  He was promoted to a Signal Boy and served on HMS Concord and then as a Ordinary Signalman on HMS Monarch and Vivid I.  He was discharged on health grounds in November 1921 when it was found he was suffering from myopia.  In 1929 he married Edith Florence Helen Prewett in Thornbury.  Florence was the daughter of Ernest Prewett of Rudgeway.  Basil and Florence had a son, Francis C. born in 1930.  The 1931 electoral register shows that they settled to live at 24 Eastland Road but they later moved to Bristol.  We are not sure when they moved but Basil Poole was still resident in Thornbury in 1933 when the Western Daily Press of 2nd March reported that he had been accused of attempting a burglary at Pound House with Albert Edward Cooper.  ‘Florence’ died in 1937 and Basil re-married.   His second wife was Florence Ascott whom he married in 1938.  They moved to Gosport where he died in 1964 aged 61