Maurice John Poulton was born on 14th January 1866, the son of Samson Poulton, a chimney sweep and his wife, Emma.  The Poultons came from Wotton Under Edge and the 1881 census shows them living there in Bradley Street and that young Maurice had also become a sweep by the age of 15.

In 1884 Maurice married Julia White in the Barton Regis area of Bristol.  In 1888 Maurice and Julia had a daughter, Julia, but tragically neither mother nor daughter survived.  Julia was aged 26.  On 7th April 1890 Maurice married for a second time.  This time his wife was Emily Webb, the daughter of William Webb, a labourer.  The 1890 Rate Book shows Maurice was liv 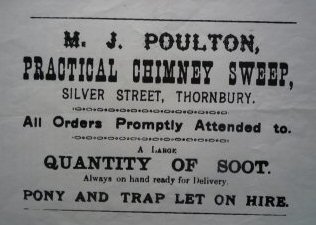 The 1911 census shows the Poultons with six children, of which Florence is assisting her mother and Albert is helping his father in the business.  We think the photo on the left shows Maurice and Emily.  It was taken at the wedding of their son, Albert in 1918.  We would be grateful from anyone who can confirm this or tell us that we have made a mistake.

Albert – we know from Albert’s army records that he enlisted in 15th (LR) Battalion of the Gloucester Regiment in Sutton Coldfield on 21st September 1916.  He was described as a builder’s labourer aged 19 years 8 months, height 5ft 6 inches, weight 123 lbs, with a 36.5 inch chest when expanded with a 2.5 inch range.  He was discharged after only 170 days on 7th March 1916.  The reason given was that he was said to be very deaf and unable to understand words of command and this ailment had not improved under treatment for two months in Tidworth.  He was considered unfit for duty.  In his short time in the Army he managed to clock up two offences on his record: breaking out of camp and remaining absent for a whole day for which he was deprived 5 days pay, and disobedience of orders (being in Swindon when his pass was for Wroughton) for which he was deprived 7 days pay.  Although we haven’t found any documentary evidence we have seen family photographs of Albert in uniform which suggest that he may have been recalled into the Army.

In 1918, Albert married Margaret Maud Web.  She was born on 23rd April 1896, the daughter of Alfred Webb and his wife, Mary (nee Hayward).  Albert became a baker working for Thompsons.  Click on the thumbnail shown on the right to see an image of their wedding.  Albert and Margaret lived in Gillingstool for a few years before moving to 21 Eastland Avenue.  They had five children: Mary Margarett born in 1919 who died in 1920 aged 15 months, Phyllis Emily in 1920, Dorothy Bessie born in 1922 who only survived three weeks, Hilda Edith on 26th August 1924 and Blakeney Albert born on 30th June 1927.

Albert also worked as a chimney sweep, like his father and he later worked for the Civil Defence School at Eastwood Park.  The special register compiled in 1939 in preparation for the war shows Albert and Margaret living in Eastland Avenue.  The register notes Albert was an ARP Warden and was involved with St Johns Ambulance.  He died on 28th September 1958 aged 60.  His address at the time of his death was 21 Eastland Avenue.  Margaret died on 22nd November 1991 aged 95.

Reginald – became a master gardener and married Elizabeth Emily Fox in Gloucester area in 1933.  They moved to live in 5 Gloucester Road where they had two children, Diane and John.  Click here to read more

Minnie – married Francis Graham Taylor in 1919.  Graham was a tailor and they moved between St Mary Street to Gillingstool and then back to number 8 St Mary Street.  Click here to read more

Doris – shown in the photo on the right had a daughter, Doreen Mary, born in 1927.  According to the Council School records, in 1931 Doris and Doreen left the district.  She married in London in 1931 to Wilfred Day.  Wilfred was a builder and one day he fell off a ladder and died.  Doris returned to Thornbury and is listed as living with her father in 14 St Mary Street in the 1939 register compiled in preparation for the War and the electoral registers of 1946 and 1950.  She is living there alone in 1954.  Doris had a daughter, Dorothy M born on 15th December 1932.  She also had a son, Adrian Harold, born in Thornbury Hospital on 26th April 1946.

In 1948 there is a little article in the Gazette reporting that Doris was one of the fortunate recipients of a gift food parcel from H.R.H. Princess Elizabeth.  It is interesting to note that Doris’s sister, Minnie, also received a similar parcel.  In 1958 she is listed in the same house, along with Andrew Paxton and in 1961 she was the only one listed as living there.  By 1965 Doris had moved to 7 High Street.