The mason and his family 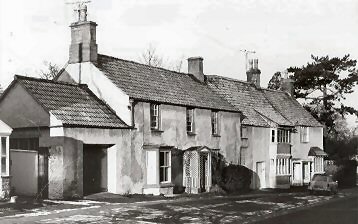 15 Castle Street with number 17 adjoining on the right

William Powell was a mason and we have been told that in 1837 William built the Register Office in Thornbury High Street.

In the Tithe Apportionment which accompanies the 1840 Tithe Map William Powell was occupying plot number 30 which was a house, now  Clematis Cottage in Castle Street Thornbury, and its garden with an adjoining paddock, all of which were owned by Thomas Gwynn

We believe that William was the son of John and Betty Powell and that he was born 23rd May 1789.

The 1841 Census shows that William Powell was about 50 years old and that he was married to Ann who was 53.  We believe that Ann was nee Ann Thurston and that they were married in Thornbury on 29th March 1812.  William was born on 23rd May 1789 and was the son of John and Betty Powell

In the 1841 Census William was shown to be a mason as was his older son who was also called William aged about 20.  William and Ann also had a daughter, Elizabeth aged 18 and a son called John who was aged 15.  We know from the Scribes Alcove website that the couple had baptised their children in St Mary’s Church in Thornbury – William on 13th August 1820, Elizabeth on 21st January 1821 and John on 28th May 1823.  We also believe that that William and Ann had other children as Scribe’s Alcove also indicates that there were baptisms of Thomas on 17th January 1813, Ursula on 22nd April 1815 and Susannah on 6th July 1817.  The Census of 1841 also shows that Thomas Liddiatt was living in the household.  Thomas then aged 14 and a labourer was William’s nephew and the son of Henry Liddiatt and his wife Susanna  Susanna was the sister of William Powell and she was buried in Thornbury on 16th December 1836 aged 40 years.  William and Ann must have given their nephew a home.

The 1851 Census shows that William and Ann continued to live at what is now Clematis Cottage.  William was at this time 61 years old and he had become a parish clerk. Ann, or Nancy as the Census calls her, was 67.  Their son William still lived with them and was now 30 years old and an agricultural labourer.  They had a house servant called Sarah who was only 11 years of age.

The death of Nancy Powell aged 73 appears in the records of St Mary’s Church.  She was buried on 25th July 1855.

The 1861 Census shows that William was still living in Clematis Cottage but he was a widower now aged 70, although he was still a parish clerk.  He was living with his 40 year old son William and unmarried and was a mason, as his father had been.  They had a servant 16 year old Ursula Fry and a visitor called Charles Morgan who was a butler aged 29 from Thornbury.  The 1867 Rate Book shows that Charles Morgan later became the tenant of Clematis Cottage.

We believe that some time after the Census William Powell moved into 40 Castle Street. When William died in 1855 aged 73 years, the inscription on his grave shows he was clerk and sexton of Thornbury Church for 55 years.

Of the Children of William and Nancy (Ann)

Thomas Powell was baptised 17th January 1813 the son of William and Ann Powell.
In 1841 Thomas, then aged 29 was a stone cutter.  He appeared to be living with John Morgan a tailor aged 42 and his wife Elizabeth aged 30 and their sons, Thomas aged 15 a shoemaker’s apprentice and Charles aged 9. They were then living at 46 Castle Street.

In a Conveyance dated 5th May 1845, John Powell, a mason who was the eldest son of John Powell senior sold a “messuage and garden together with outbuildings, courtyard” etc to his nephew Thomas Powell who was also a mason and at that time was unmarried.  This property was later to be known as Threeways in Castle Street.

Thomas married Eliza Beardmore on 9th March 1847.  Eliza was the daughter of Theophilus Beardmore a farmer.  She was born in Abbots Bromley in Staffordshire.  Their first child Thomas William Powell was baptised on 4th May 1848.  Thomas (senior) was described as a stonecutter.  They had daughter, Harriett Elizabeth Powell baptised 7th June 1849.  Sadly she died aged 11 months and was buried in Thornbury on 4th June 1850.

The 1851 Census shows that Thomas Powell and his wife Eliza lived in Threeways.  Their only surviving child, their son Thomas was aged three years. Thomas was described as a “grave stone cutter.”

On the 18th April 1856 Thomas Powell obtained a loan of £50 secured against the property number 22 on the Tithe Apportionment Map and later known as Threeways.  The loan was made by Caroline Lewis

It would seem that despite this conveyance Thomas Powell and his family continued to live in the house for a while.  Indeed the 1859 Rate Book appears to indicate that Thomas Powell owned and occupied Threeways.  The 1861 Census also shows the family lived in Threeways.  Thomas was then a monumental mason aged 48 and his wife Eliza was ten years younger.  Their household was a large one.  It included their children; Thomas William aged 13, Bertha Hannah aged 9, William John aged 7, Sarah aged 4 and Frederick Charles aged 4 months (Thomas had been baptised on 27th March 1861).  Thomas Liddiatt a shoe maker aged 36 lived with the family as a boarder.  Mary Olive seems to have a separate household in the same property.  Mary was 45 and the widow of a tallow chandler.

The Rate Book of 1862 shows that Thomas Powell was no longer the owner or occupier of Threeways.  His name was crossed through.  Thomas Liddiatt was now the occupant  and Caroline Lewis now owned the property.  Probably Thomas and his family moved into what later became 42 Castle Street at this time, although we are unable to confirm this until the Rate book of 1867.

Ursula Powell died shortly after birth and was buried on 25th April 1815.

John Powell was baptised on 28th May 1823.  On 7th March 1846 John married Jane Poole, the daughter of Thomas Poole, a labourer.  They don’t seem to have had had any children.  In the 1851 Census they lived in what is now 36 Castle Street

On 30th February 1854 Sir John Key and those holding the mortgage of The Priory sold it to John Powell for £215.  When it was sold it was said to be a property in the occupation of Thomas Smith for many years then of George Nelmes the school master and now of John Powell or his under tenants.  From this we know that John Powell acquired this property.  However we do not have any confirmation that he actually lived there.

By 1861 the census seems to show that John was living in 12 The Plain with his family.  John was a master stone mason employing 2 men aged 37 living with his wife, Jane aged 36 who was born in Uphill and a niece, Ann Elizabeth Fry a house servant aged 13.  Ann was the daughter of  George Fry, a tailor and his wife, Elizabeth (nee Powell) who was John Powell’s sister.

A plan contained in an indenture for the sale of Clematis Cottage in 1867 has J Powell marked on the neighbouring property (The Priory).  It seems that John Powell still owned the property.  By 1869 we believe it was owned by Henry Craven St John.

Around 1867 John Powell also seems to have acquired another property which he converted into the house later known as 20 Castle Street.

The 1871 census shows John and Jane were living at 40 Castle Street with John’s brother, William who was working as a milkman.

John’s wife, Jane died aged 54 and was buried on 10th June 1879.  The 1881 and 1891 censuses show John living with his sister, Elizabeth and her husband, George Fry in the High Street.  John died aged 69 and was buried on 30th December 1893.  The Gazette of December 30th 1893 reported that John had been walking along the fields from Thornbury to Alveston when he had an “apoplectic seizure”.  Apparently he was taken home and medical assistance called but he died soon afterwards.

William Powell never married and became the owner of what is now number 40 Castle Street.

Elizabeth Powell married George Fry on 21st July 1844.  George was from Tytherington and was the son of Isaac Fry an innkeeper.  George and Elizabeth Fry lived at the Old School House, at 13 Castle Street,  and Oriel Cottage in Castle Street.